Below is the December 2008 – June 2009 daily candle chart for WTI crude. Note the similarities between it and the current pattern (see chart at the bottom of this blog) thus far. Note the big white up candles off of the $36 bottom in December 2008—about 7 bars ( business days)—then a ‘spinning top at $48. Following the spinning top– a big move down, followed by a meandering downtrend over two months (to February 2009). Oil ended right back down to $35. Now go to the new chart below this one.

Below is a six month chart of the current oil trend. Its displaying a similar pattern to 2008 so far—7 mainly-up days –with fairly big white bars. Yesterday began to sell off (and it seems to be heading that way again today). It seems that we’ve got a similar pattern as in late ’08-early ’09. If so—I’d expect to see expect $45 on WTI again, perhaps lower. The main thing is that in 2008-9, as was  the case in 1998, and before that in 1986—oil always bottomed through complex bottoming process. The point is: No “V” market reversals for oil over the past 30 years. I covered the historic chart of oil on this blog: https://www.valuetrend.ca/history-may-show-us-when-to-buy-oil/ 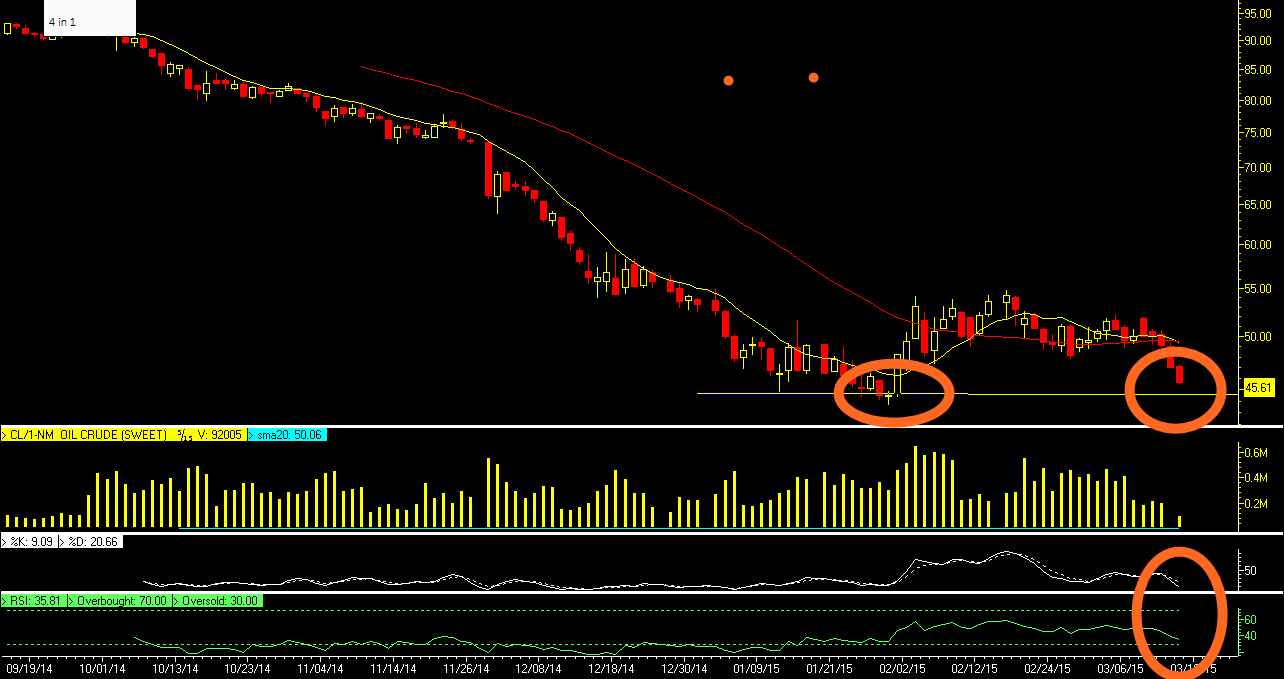 Oil will quite possibly provide one of the greatest trading opportunities that we’ve seen in many years. Let the formation play its way out. Let the players (OPEC, Russia, North American producers, etc.) play their game. Soon enough, we may see one of those massively profitable opportunities that rarely presents itself – I for one intend to play such an opportunity aggressively. Patience will likely be rewarded.

You can read my latest articles in these publications free at:

A while ago I did some research on private corporations donating money to the current Federal government. Not surprising, Bombardier and SNC Lavalin were disproportionately contributing to the current END_OF_DOCUMENT_TOKEN_TO_BE_REPLACED

Traditional bowling involves a "gutter" on each side of the lane. If you throw a bad ball, your ball goes into one of the two gutters. Bumper bowling eliminates that problem. Bowl a bad ball, and END_OF_DOCUMENT_TOKEN_TO_BE_REPLACED

The past few days have been illustrative of how "Dumb money" operates. For those unfamiliar with the term, Dumb Money refers to retail investors. Some of you may be familiar with the "Smart Money/Dumb END_OF_DOCUMENT_TOKEN_TO_BE_REPLACED