Home / Not that there’s anything wrong with that

Not that there’s anything wrong with that

I’m not a fan of Elliott wave projections. Not that there’s anything wrong with Elliott Wave Theory when used in the right context (today’s blog title borrowed from a Seinfeld skit).

I really don’t see any logic in using this theory to tell you at what level, and when, you should buy or sell. However, as I wrote in my book Sideways, I do believe that markets have a tendency to behave differently during different phases of bull and bear markets. Elliott Wave theory gives us an idea of what inning, so to speak, the stock market is in.

For example, the first wave (or inning of the game) is one of disbelief after a bear market–it can be choppy. The second wave is confirmation of their disbelief and profit taking by participants –it’s is a corrective action (“I knew that was a head fake!”).  The third wave is where the crowd joins in – which tends to make it the longest wave. Then a final correction (wave 4) before a shorter, sharper wave of speculation (wave 5) ends the game. Elliott Wave analysis will not tell us when a given wave is over. Sorry, Fibonacci lovers. For more thoughts on that part of the theory—see this blog.

However, EWT an excellent tool for giving us a feel as to where we are in the cycle. And that’s what I’d like to look at today

For that final wave 5, the tendency is for something to add a “new paradigm” to the expectations of stock market participants. For example, in the past – wave 5 final market moves have been characterized by  such new paradigms as “the Nifty 50” – which ended the bull market of 1950-1964. It was the new paradigm of the “Tech Bubble” which ended the greatest bull market in history from 1982-2000. And it was the new paradigm of “Peak oil theory and Sub-Prime debt” that ended  the 2002-2008 market. Each one of these new paradigms ended. In other words, they really weren’t new paradigms. They were just events or developments that are part of human growth and market reflection of that growth.

Right now, I believe that the “new paradigm” has been “TINA” –There is No Alternative. Super low interest rates (historic lows) have driven investors into the stock market and out of safe investments. That, along with the low rates inspiring easy leverage to over inflated real estate—which in turn creates a “wealth effect”. People buy a better car and better stuff when they have a valuable house and a good stock portfolio. This pushes earnings higher – justifying higher valuations. It keeps going until it can’t keep going any more.

Like the other new paradigms that we thought would never end – this one will end too. Oh, and one other thing: wave 5 is often characterised by a greater angle of ascent, and tight, lower volatility moves. Note the angle of ascent since 2015 is a bit steeper,vs. the prior 2 uplegs (wave 1 &3). Note the lower price swings since 2016 (and lower VIX levels) – chart below. 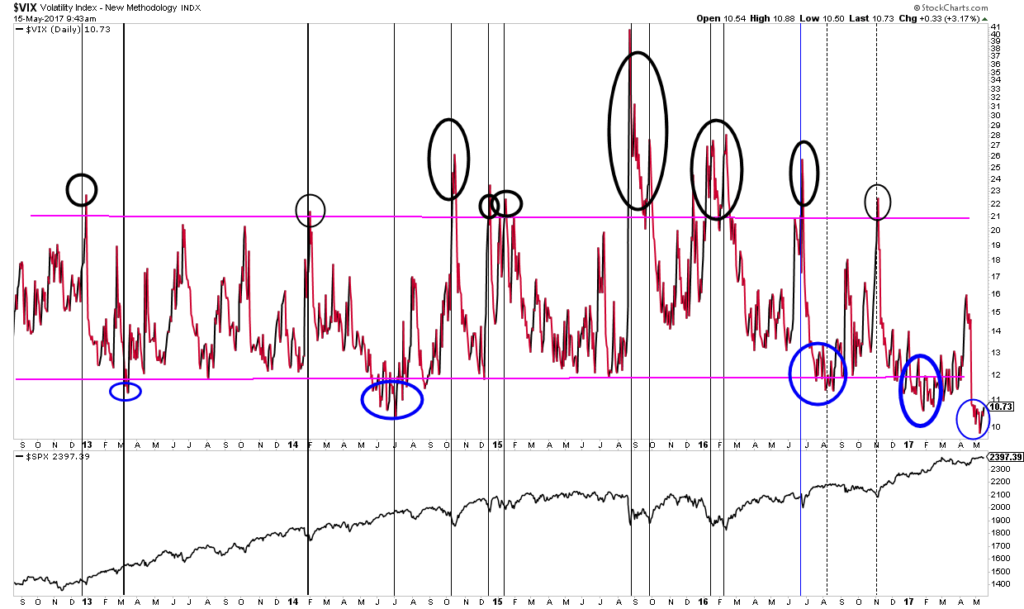 We’re probably in wave 5 of the current bull market. It could run for another month, another quarter, another year, or even longer. But I think there’s no denying it. We’re in that final inning. Stay aware, and be prepared.