Today, I’d like to look at the real nitty gritty stuff. We’ll start with a basic candlestick formation that the S&P 500 has been showing over the past few trading days. The spinning top is a formation signalling confusion in the market. High wicks with a small body in the middle tell us that market participants were excited and buying at one point during the day, then scared and selling during another point of the day, but ultimately decided to close the day pretty close to its opening price. Big emotional swings create tall wicks and long tails.

Note on the chart below the high and lows of January 24th in particular. This is a classic spinning top. The 23rd and 25th were also small bodied days, but did not truly look like spinning tops. Nonetheless, you can see the confusion of late via these candlesticks. If the market puts in a classic reversal candle such as a “hammer” or inverted hammer (which is very powerful as a market top signal), or something like an “engulfing pattern” or an “evening star” (also known as an island reversal)- we could see a neartermed pullback for the S&P 500. Please read my book Sideways for the basics on these and other candlestick patterns.

Now, let’s look at the S&P 500 vs. the 200 day SMA (simple moving average). As of Friday, it was 12.5% over the 200 day SMA. I have done studies on the markets when they are 10% or more above their 200 day (40 week) SMA’s. The net result is that market tend to consistently retract to a point of less than 10% above the 200 day SMA if they remain over that level for any period of time. This retraction to a sub-10% 200 day SMA level can occur via a sideways action, or a correction. The current level of the market vs. this key MA suggests a retraction is eminent.

Finally, let’s look at my short termed timing system. This system employs Bollinger Bands, stochastics, and RSI to measure if the market is likely to pullback or rise. The indicators must trigger overbought or oversold conditions concurrently to issue a buy or sell signal. For the latter half of last year and into this year, we have witnessed a condition of perpetual overbought markets. So my short termed timing system was of no benefit in catching swings. In fact, there have been no swings for the better part of a year. 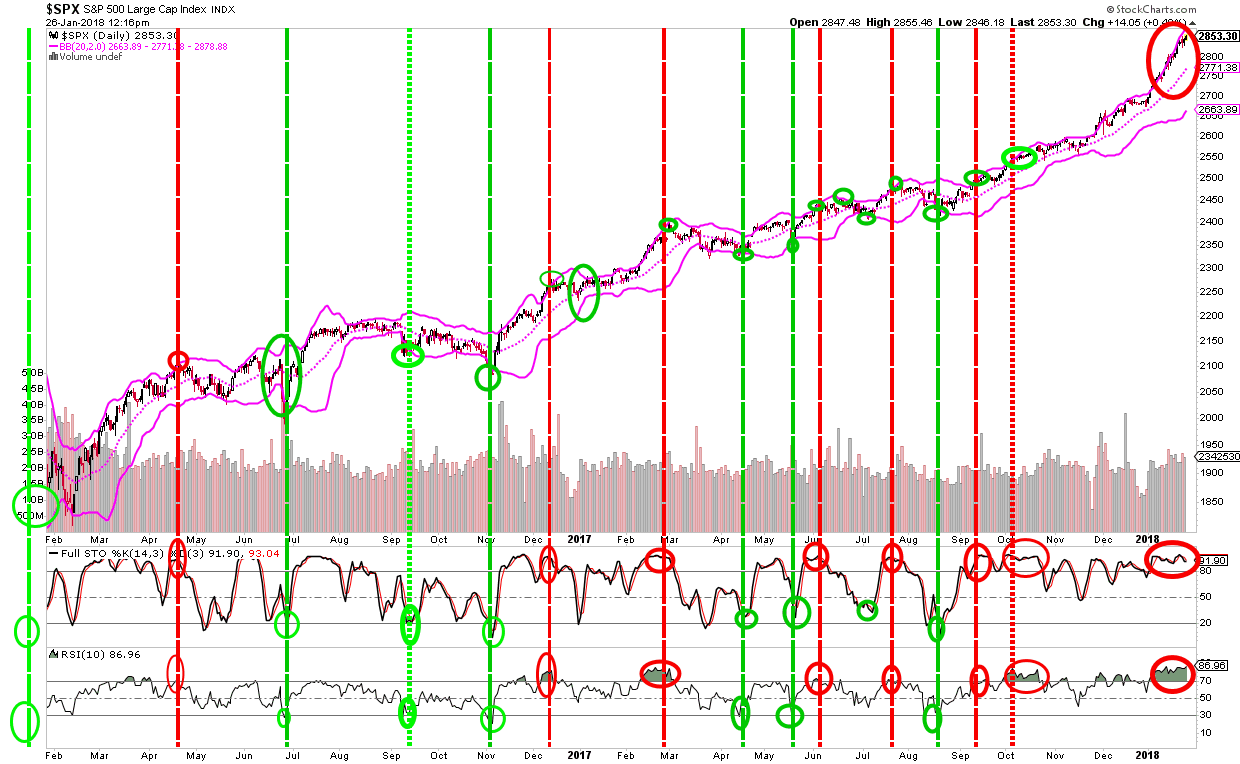 Having said that, we might look at the conditions on this short termed timing system now. Will the perpetual motion machine that has been the market take a breather?

Note on the short termed timing chart that the levels of RSI and stochastics are particularly stretched right now. They’re  exceedingly higher than they were last year. This makes sense, given the parabolic jump the market has taken of late. Despite the market’s ability to brush off the  overbought conditions of last year, it is likely that the current mega-overbought conditions are unsustainable.

In a nutshell, we have some candlestick formations that are signalling a change in market psychology. We have a market that is stretched over its 200 day SMA that has historically never held for too long. And we have some short termed indicators that suggest markets are vastly overbought.

All in, I’d bet that we are due for a healthy, much needed neartermed correction very soon.