Home / Near termed & mid termed view, and a case for small caps

Near termed & mid termed view, and a case for small caps

Today, I am going to cover some thoughts to help you plan for the near and short termed time horizons.

Two reasons I like the look of the Russell 2000 Small Capped index (IWM ETF) chart below. Not necessarily a current buy, but something to watch. 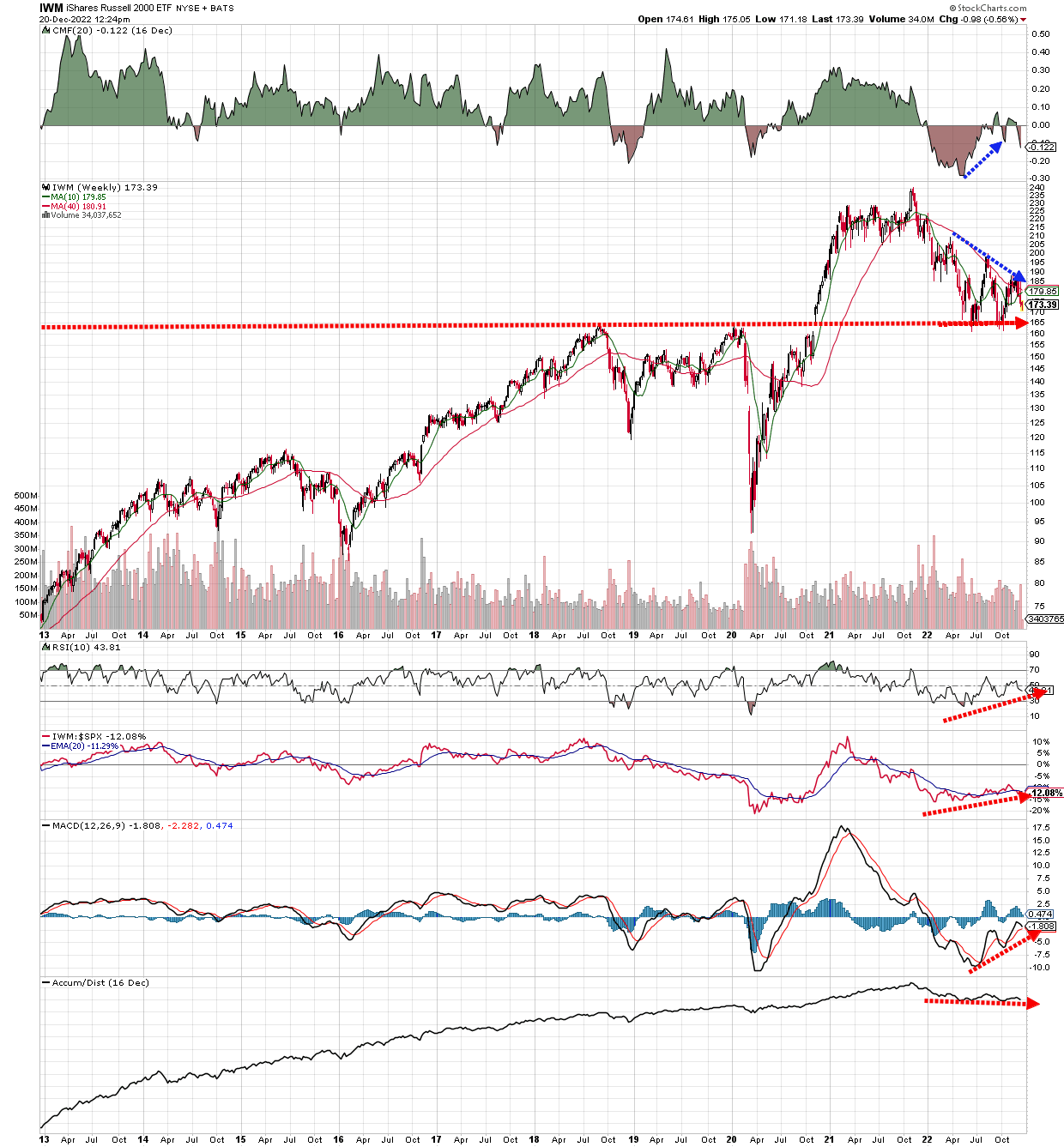 Here’s the SPX large capped index for comparison: Note that long termed support lies waaaaayyyy down below the last low. I’m thinking 3200-ish. Also note the lower low in the summer – aka the downtrend is not showing signs of a base. Positive CFM (top pane), but all of the other oscillators are flat vs. up on the IWM chart. Bottom pane cumulative moneyflow is the same (flat) for both indices so far.

All in, I’m thinking that IWM will be a better bet when the bear market is over. 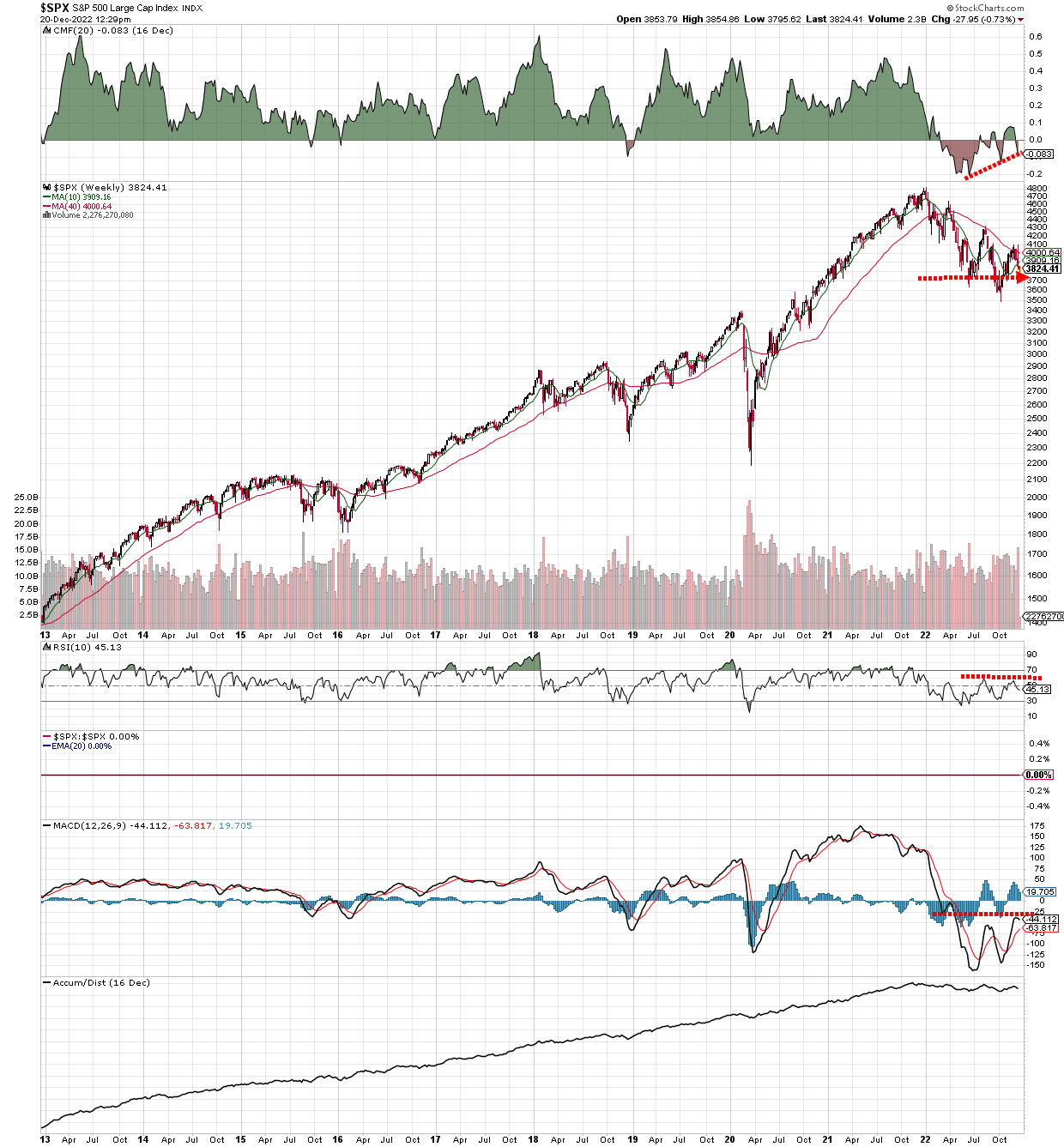 The 30-day moving average of the equity put/call ratio has risen to the highest since November 2008.

A lot of funds are buying puts according to BearTraps research. From a contrarian viewpoint, too many puts vs calls trading looks like excess hedging, with money managers and investors in panic mode buying “insurance” on year-end. I’ve circled the recent spikes in put buying on the chart below. I look for clusters–most certainly has been a bit of panic hedging lately, don’t ya think?

The SPX is off 6% in December 2000 vs +90bps average return since 2000. So this hasn’t been your normal December from a seasonal pattern perspective. Since 2000, there have been only 3 negative years more than 5% notable decline in December. This, like my put/call ratio observation, speaks to upside potential as volume fades out heading into year-end. I’m talking short termed rally here folks. Get out or rotate to better sectors if/as/when opportunities might present themselves.

Take a look at the chart below. Here’s something to make you pucker: We are roughly 12 months into a bear market which is still well below the 20 month average length and … wait for it…also below the average drawdown of -41%. 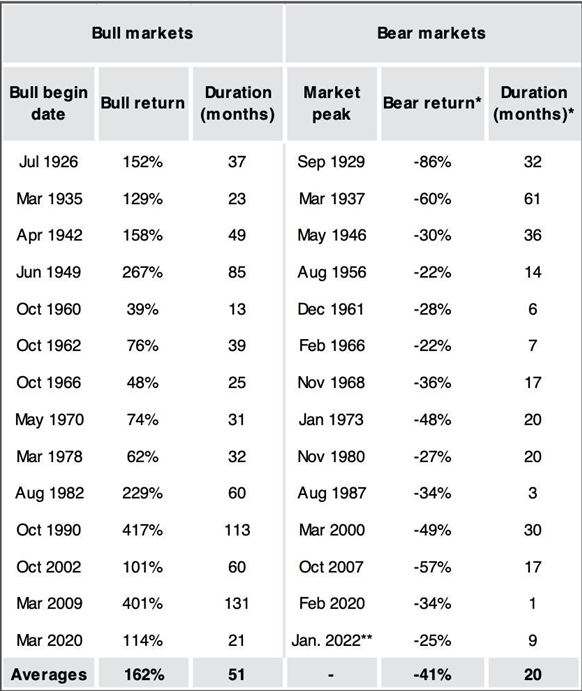 Why a recession is becoming more likely

Hey don’t listen to me about economics. I’m just a simple Technical Analyst (although in 2020 & 2021 ValueTrend called the inflation longevity better than the largest government financial influencer in the entire world. The US Federal Reserve Chair…just sayin’…).

Powell: The last two CPI reports show “a welcome reduction in the monthly pace of price increases. It will take substantially more evidence to have confidence that inflation is on a sustained downward path. We are going into higher inflation next year than we thought. Recent data gives US greater confidence in our forecasts… We have a ways to go on core services ex housing. Inflation in non-housing services is fundamentally about the labor market and wages. See little progress in average hourly earnings coming down. There is no painless way to restore price stability. I wish there were a painless way to restore price stability; there isn’t.”

Bill Ackman: “I don’t think the Federal Reserve can get inflation back to 2% without a deep, job-destroying recession. Even if it gets back to 2%, it won’t remain stable there for the long term. Accepting 3%+/- inflation is a better strategy for a strong economy and job growth over the LT.”

Anyhow–Here’s Bespoke on comparing the yield curve today to that year, oh so long ago–I’ve made the important part of their observations bold:

“Going back to 1962, there have been four other periods where the 3m10y curve inverted by 50 bps or more for at least 15 straight trading days.  Each of those prior streaks lasted much longer than the current streak, although, with the curve inverted by over 80 bps, this streak can also be expected to last much longer.  In terms of where these streaks occurred in the business cycle, in each of the four periods, a recession followed within eight months.” – Bespoke

For those unfamiliar with the yield curve. Basically, the “normal” situation is for longer commitments (long bonds) to yield more than short commitments.  An inverted yield curve occurs when yields on short-term bonds rise above the yields on longer-term bonds of the same credit quality, which has proven to be a relatively reliable indicator of an economic recession. The chart below shows you that 1 year bonds pay more than 30 year bonds! This screams “recession”. For equity investors, this means that the market may also have a final leg down to go.

I think that the market has a decent chance of a short termed rally. Thereafter, the market looks like it might continue its downward trajectory for a while. Possibly for a final bear market washout (lower low) as recession talk becomes more predominant. I’ve hammered into your cranial vaults the idea that financial assets will likely be on the back-foot as governments acknowledge that 2% inflation targets are unrealistic, the USD is too high, and recession isn’t just just talk. Its real. The alternative to financial assets is inflation protective assets like commodities and commodity producers, gold, emerging markets, and global currencies. Those, and unique overlooked value plays – like the small capped arena as I discussed above. I’ll continue to post my thoughts.