Home / NAFTA, the TSX and the Loonie

NAFTA, the TSX and the Loonie

Before we get started, I thought I’d shamelessly show off our new video from the ValueTrend website. I thought it was well done. But then again, I am just a wee bit biased!

Click here to see this short video on how ValueTrend combines technical and fundamental analysis to formulate our managed process.  And now, on with the blog….

It appears that we have a tentative new trade agreement between Canada and the U.S. replacing the previous NAFTA agreement. A quick search on the internet will satisfy any readers as to the details of the deal – so I won’t comment on it here. The comments that I will make today will be strictly technical. I’ll cover the TSX and the loonie. I’m not just going to focus on the neartermed patterns – my goal is to give some perspective on mid-longer termed patterns, and the resulting potential outlook that may arise from what is happening right now. Let’s get started… 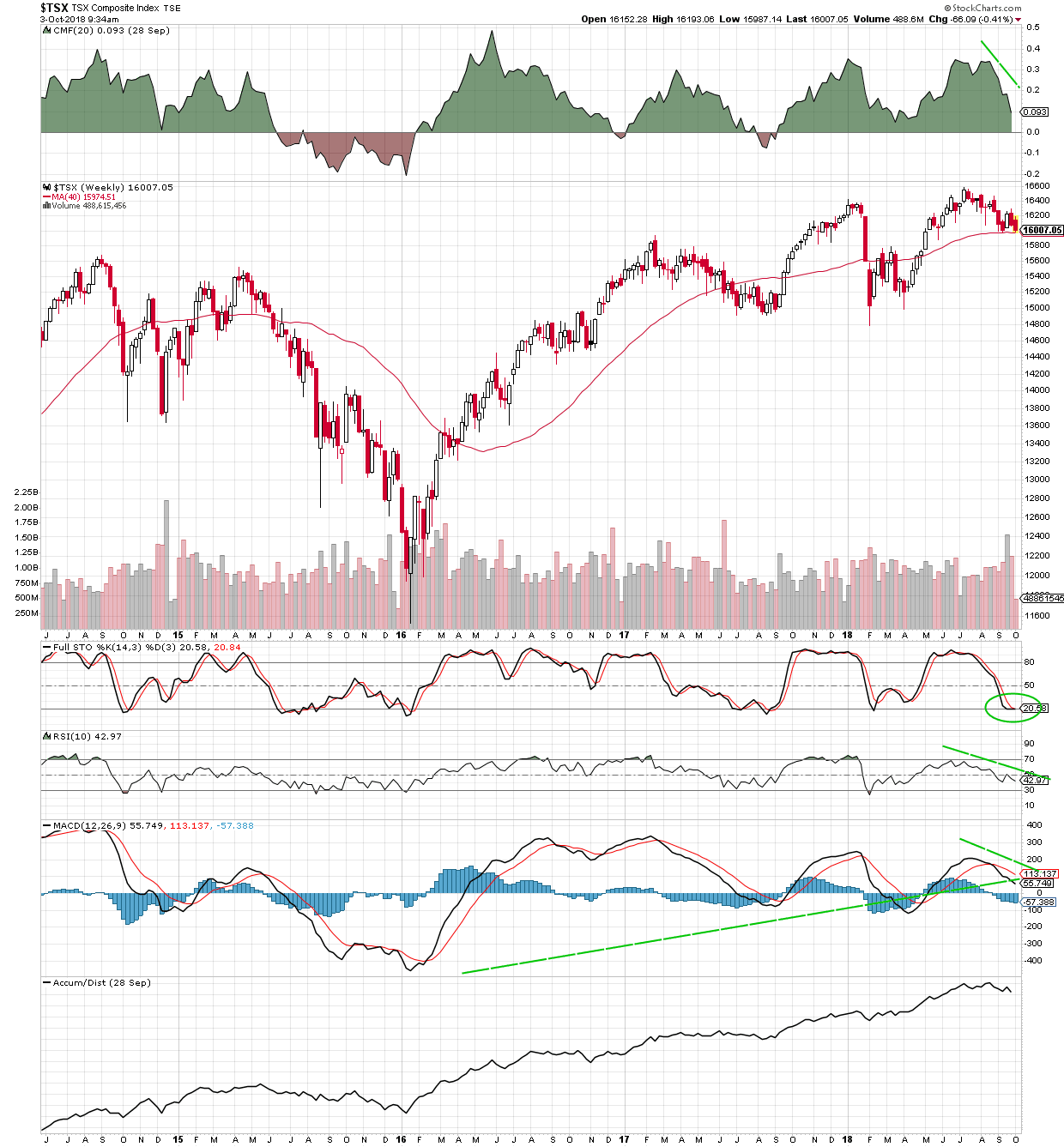 The TSX 300 index has been in a choppy uptrend since 2016. You can see that there have been 3 incidents where the market corrected  steeply enough to take notice since 2016. Perhaps the TSX will not correct as steeply on this most recent overbought move, given the positive (?) outcome of a NAFTA deal. Or, perhaps it will rise for a few days, and return to a corrective mode.

In its favor, the TSX displays very positive moneyflow (bottom pane) to back its uptrend since 2016. Stochastics (first pane below the price chart) is oversold, and suggests a rally is overdue.

On the negative, we see on the top pane (Chalkin Moneyflow momentum indicator) that moneyflow has momentarily slowed for the TSX. More importantly, we can see the longer termed momentum indicators RSI and MACD moving down. They could reverse upwards upon a market rally lasting for more than a few days. But that remains to be proven.

If I had to score the TSX on a technical perspective, I would say that the trend is decent, although volatile. Moneyflow backs it, but a few other indicators suggest a cautious tone. I’d give the TSX 5/10 right now—i.e., neutral. Its much less a broad market play than it is a selective market to play. 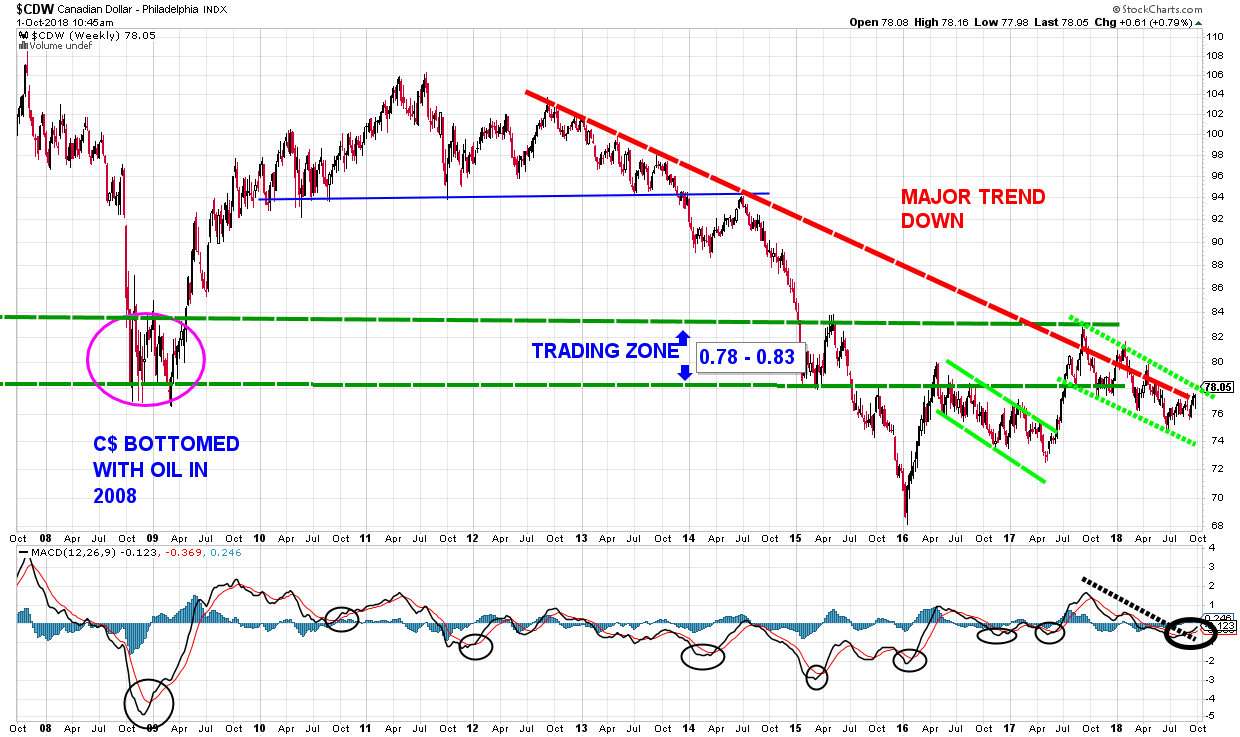 I’ve posted this chart of the Canadian dollar (above) with its various annotations numerous times on this blog – and have updated it regularly. Today, I will bring you back to a few key points when viewing this chart, and one new development since my last entry on the loonie.

First—it ain’t over ‘til its over. The “Big Red Line” is the dominating trendline. The trend is down. Any questions?

Next –  the minor trend – which I have been following on this blog for some time – is marked by dashed green channel lines. It is an down-trending channel within that bigger downtrend – aka the Big Red Line. We are nearing, but not at, the top of the small trend channel. Somewhere around $0.80 / USD represents the top of the channel, and the loonie sits at around $0.78 now.

One positive development has been the bullish crossover by the MACD indicator- bottom pane. Such crossovers have indicated positive moves more often than not. The more defined the crossover –the better the odds for a bigger move. The current crossover is not coming off of a deeply negative MACD level, and the hook is not aggressive. But it’s there, nonetheless. This suggests a potential move to the top of the green trading channel, noted above. From there, the loonie will have a whole lot of work to do to break the major downtrend.

I have a certain degree of optimism that the loonie will see $0.80 or near that level. I have limited faith in a move much beyond that level. I will only believe that the loonie will be a long termed performer if it can crack $0.80 and move well into the low $0.80’s for a period of several weeks or longer. The BOC comment regarding its tightening policy might help push the loonie to that $0.80 level. However….The bigger downtrend presents a very big wall to climb for the Canadian currency. For this reason, I expect to do some personal currency conversion if/as/when the loone moves to $0.80. I don’t think the move will last.

BTW–a quick shout-out to my good friend Grant Neuber over at Wood Gundy in Barrie, who called me this morning to discuss the NAFTA deal and resulting market outlook. Grant has been in my circle of pals for almost two decades – I’ve always viewed him as a guy who has intelligent perspective on things. Thanks for the inspiration for today’s topic, Grant – I hope this blog helps!

Here is the link to last week’s BNN/Bloomberg MarketCall show.