The market is now in “sell everything” mode. This should provide some clue as to how much longer and deeper this bear market can go.  Typically, capitulation – aka the “get me outta here” attitude –  is seen closer to the end of a bear market. Yet, I strongly suspect there is more downside to come before that actual bottom is achieved. My current target  for the SPX remains 3400-3500.  Yes there can be interim bounces, just like we had a few weeks ago when we saw a less-than-double digit rebound.

Here’s a daily chart with some of the short termed indicators that I find helpful in looking for neartermed moves. I’ve marked green arrows when we have a deeply oversold stochastics and a touch of the 30-line on RSI. When combined with a massive move down to either break our touch the lower Bollinger Band (which contain most of the markets moves–aka 2 standard deviations of a 20 day SMA) you often get neartermed pops. It looks like those conditions are roughly with us now to see a bounce. Note in any downtrend  (and this is important) –  peaks and troughs get progressively lower. Thus, we cannot look to the last peak near 4150 as a target. Instead…look for a possible maximum target nearer to 4100. If we get the bounce (no guarantees). That level represents recent support (before the market fell out of bed again) and the neartermed mini-peak in May.

No guarantees of a rally. We could just flush out to 3400 with no bounce. From there, we call it as we see it.

Note also that moves to the top of the BB’s combined with overbought stochastics and RSI levels of 60 +, it can signal pullbacks. I’ve marked those situations with red arrows. We got that signal in early June. 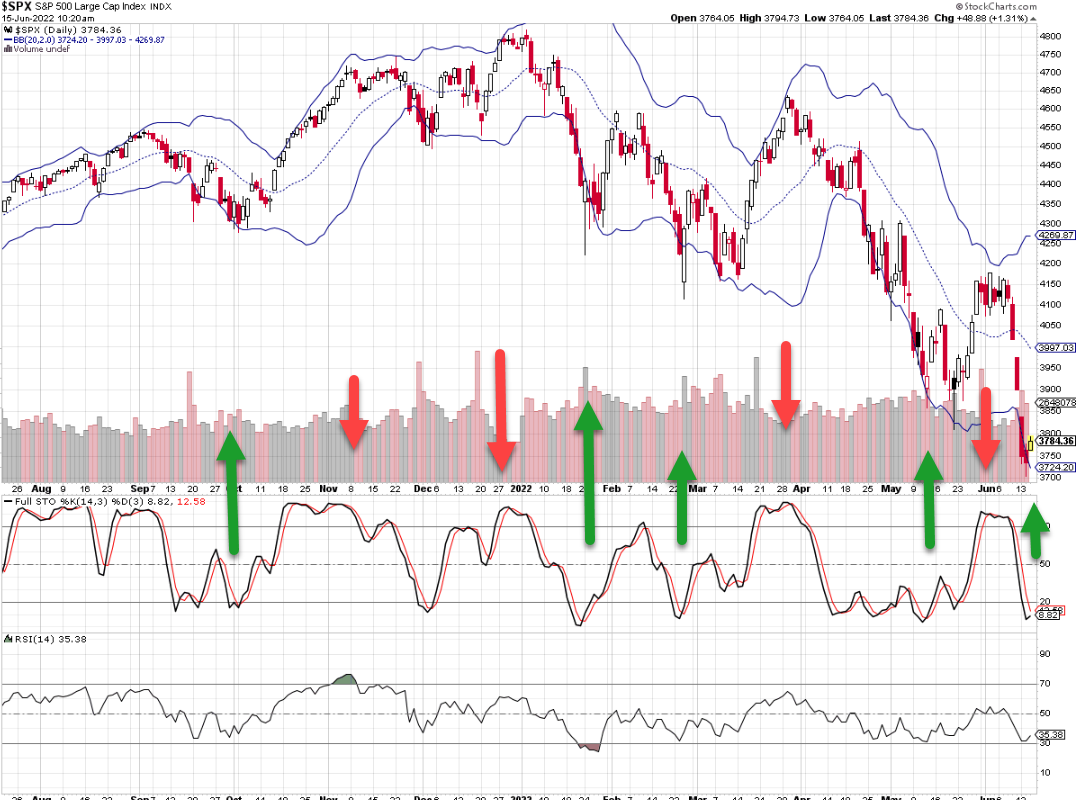 OK, so the strategy is obvious. Use any neartermed pop, if any, to raise cash. But, you can also consider diversifying your portfolio into gold. Did you see my interview with Brooke Thackray? Watch it here! We talked about gold. We are both fans of this trade. In fact, in today’s chaos, it is holding its ground! Here’s some more evidence of its potential attractiveness beyond our discussion in the video: Gold has been popping up on rate hikes. Question: What are NA governments doing to (try) and control inflation right now? If you guessed anything else beyond rate hikes, you have some catching up to do on what is going on out there. 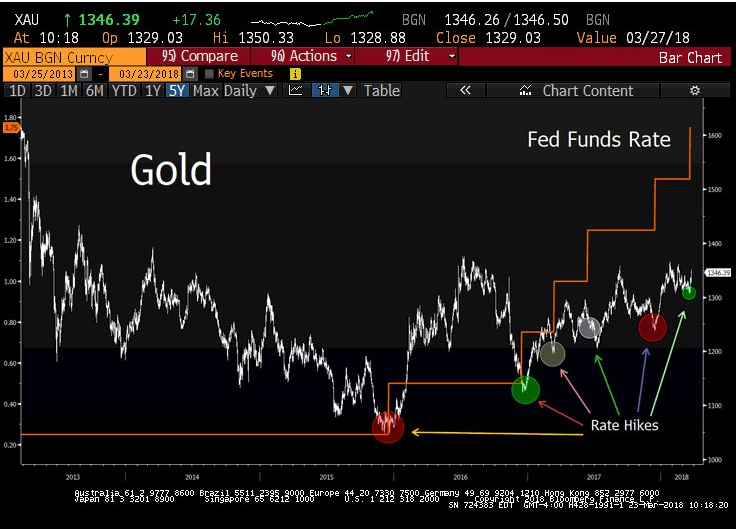 There was a meme during Trump’s presidency noting that the markets moved more on Trump’s tweets than on anything else. Technical Analysis didn’t matter.

Now, the Fed is back to doing the talking. It plays a more persuasive role in market moves than ever – given the inflation situation. If expectations are for a 0.50% rate move, and we get a 0.75% move such as announced yesterday – you can discount all value metrics and technical analytics. Markets are likely gonna fall. However: A confirmation of the expectation usually means the technical indicators rule – its back to normal crowd behavior driving the markets. A positive surprise (less tightening) would mean markets rally. Don’t count on that, BTW. So – keep this in mind. Follow the charts, but be wary of surprises from the Fed.