I’ve noted in my blogs over the past two weeks that I’ve received positive indications from my Bear-o-meter for a lower risk stock environment– with the only remaining signal needed as a move by the S&P 500 (SPX) over its 200 day (40 week) SMA.

If you’d like to see a video with greater details on this outlook, I covered this development on my Bloomberg/BNN show here

I’ve noted in the past, as I did on the Bloomberg/BNN show last week, that I like to see 3 positive days (preferably clustered within a single week) before confirming the probability of a market turnaround. We got that signal last week. So, as when I posted the Bear-o-meter reading, the only component for an outright buy signal – based on the way I do things- is a firm move over the 200 day SMA by the SPX. Of note, that moving average currently sits a hair over 2760. The market sits a hair over 2720 as I write this blog.  We are talking really, really close here, folks.

The only other monkey in the barrel that remains is the mid-term election – which takes place tomorrow. It is expected that markets will react positively if the Republicans win both legislatures vs. if the Democrats win. However, presidential election stock market cycles demonstrate that no matter who wins, the pattern is often bullish for markets after the results (positive or negative) are absorbed. Don Vialoux notes on his popular “timing the markets blog”  that strong employment figures may help the Republicans maintain control of the senate. We shall see.

Note the chart below – if you look at the mid-termed part (second year)  of the 4 year electoral cycle, you will see that markets tend to be flat to bearish over much of the year (which they have been) –  and then see a reprieve in about the last two months of the year. That, along with a setup for a very strong year into the third year of the 4 year cycle, also known as the post-election year. Should the cycle follow (and it has followed its past tendencies throughout the Trump presidency), next year may be a fantastic year on the markets. We shall see. 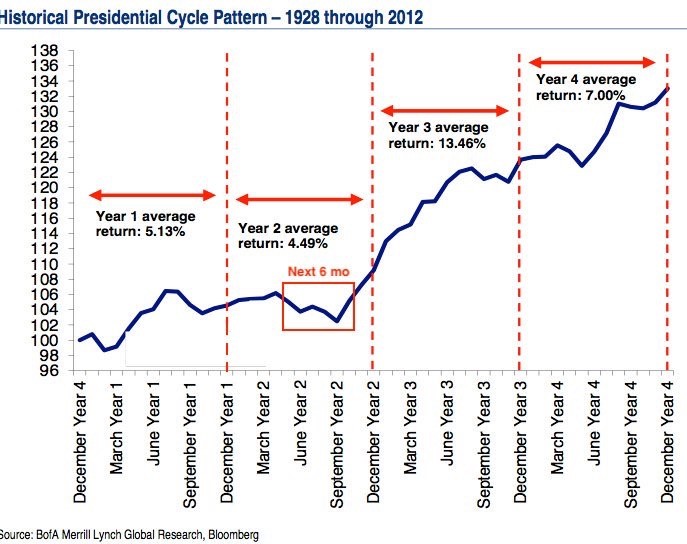 I expect this week to begin moving into the market with the cash we at ValueTrend held over this summer. If the market sells off tomorrow, that would be icing on the cake—possibly a good opportunity made better to buy stocks.  If it rises, I will play it by ear and either buy in if it’s not too aggressive a rally – or wait a day or so. Either way, I will not deploy the entirety of our cash reserves until the S&P takes out 2760. I expect to go in with about half of my cash to start.

Should that move over the 200 day average occur this week, it is really up to the market’s “look” as to whether I give it a few days to prove an adherence to that level, or just jump right in. Sharp moves tend to make me hold back a bit (given the market’s tendency to sell off emotional moves one way or another) – vs. orderly moves into the market. Either way, I expect to be into the market this week with a potential for holding back some cash if the 200 day SMA is not cracked. Its all about controlling our emotions, and following a plan.

No perfect way to do it

As always, what I am doing is not necessarily the way you should play it. You may feel that this market should be bought now without abandon. That, or you may want to hold off entirely until the 200 day SMA is broken and holds for a number of days. I am not going to argue with either strategy. The point is, having a strategy beats an emotional approach to investing.

And that, folks, is what this blog is all about. Happy trading!