Here are a few charts that have caught my eye for one reason or another. Most  are coming off of – or in the area of – a significant support level. Seasonals are positive for some of them. Some might be suitable only for neartermed traders, some for longer termed investors. Some are historically more volatile than others. Some are just things to watch for now. Investigate these ideas on your own.  If any of my basic observations spike your interest, you can consider a trade. Here we go:

Nat gas shows an old neckline level from its 2016 bottom formation as current support. That support comes in around $2.50. Clearly, gas is bubbling up from support, and may rise above $3 in the near future. That’s a short termed, relatively shallow trade—but perhaps worthy of a neartermed traders attention. Nat gas is seasonally strong from now until June.

Japans major index has clear support (former resistance points) between 20,000 and 21,000. The index looks to be bouncing off of the 21,000 level. Seasonal tendencies are bullish for that index from now until May. Perhaps 24,000 will be seen again. Worthy of a trade consideration for neartermed traders.

You can choose to trade the individual commodities like I did when I bought into oil not too long ago. Or you could buy a basket of commodities which includes metals, the softs, etc. The CRB index is widely followed as a broad representation of the commodity space. The problem with such a viewpoint is that it’s pretty hard to compare agricultural commodities to something like copper. Likewise, can you really compare something that we use industrially to something with vastly more concentrated audiences as gold does? Whatever the case, the CRB has been in a giant base since mid-2015. If it breaks out, watch out!

Bombay’s exchange has been on an uptrend since 2012. However, it periodically arches off the trendline to become overbought. Short termed topping patterns emerge after such an occurrence, and the index peels back. Watch for a neckline break on the BSE index. If it breaks, expect  a return to the trendline. Such a move would likely mean a great buying opportunity.

If this puppy breaks to the upside—expect a monster move up. If it cracks – well, let’s just be sure we don’t own the sector if this thing cracks. One to watch. It could be huge either way! 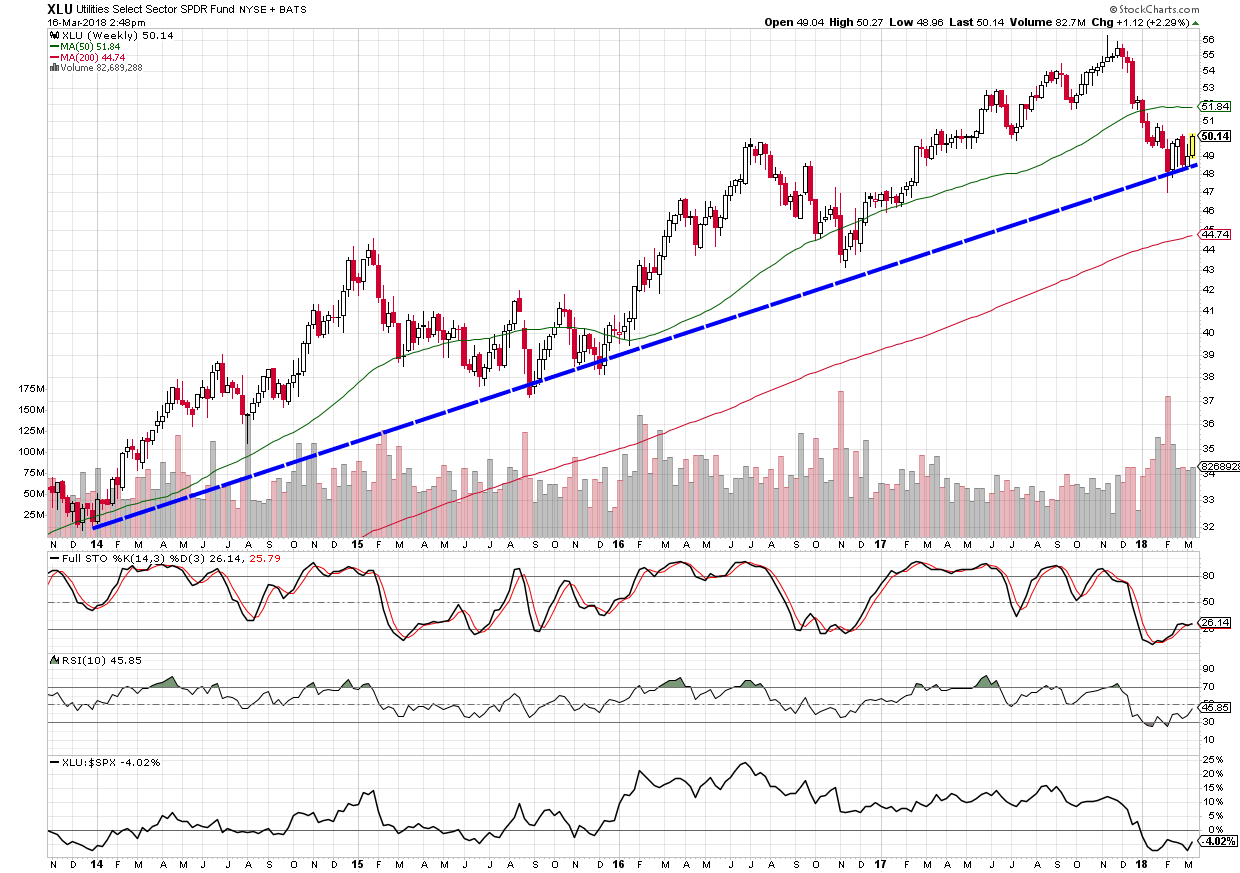 Everyone knows that rising rates hurt utility stocks. That’s because utility companies have lots of loans, and higher rates mean lower profits. US rates are going up. The secret is out!  But at some point, the bad news (rates) get priced in. Could now be that time? Seasonal trends are for this sector to rock n roll in the summer. The trendline seems to be intact. Momentum oscillators seem to be hooking up. A contrarian play?  Hmmmm…..