Home / How much upside is left for the loonie?

How much upside is left for the loonie?

Here is a chart of the loonie that I’ve been tracking for some time. You will notice the big trend has been down since 2011. It looks to have been broken. However, there is massive resistance at just under $0.84. I noted this in a blog quite some time ago and suggested a target of 0.80-0.81 for the loonie, but if that was blown through, we could see that ultimate 0.84 level. Looks like we will see that 0.84 (ish) level, now that 0.81 has been broken!!

Below the seasonal chart for the loonie. You will see that even in non-rate-rising years, there are seasonal trends to drive the loonie higher through the summer. But the peak often occurs in late September. The pattern suggests a bit of chop though the fall into winter before the seasonal decline for the loonie begins in November. So – given that nothing is precise (seasonal are a tendency, not an absolute)—we may have a window of Sept-November to see the loonie hit that 0.83-0.84 potential high. 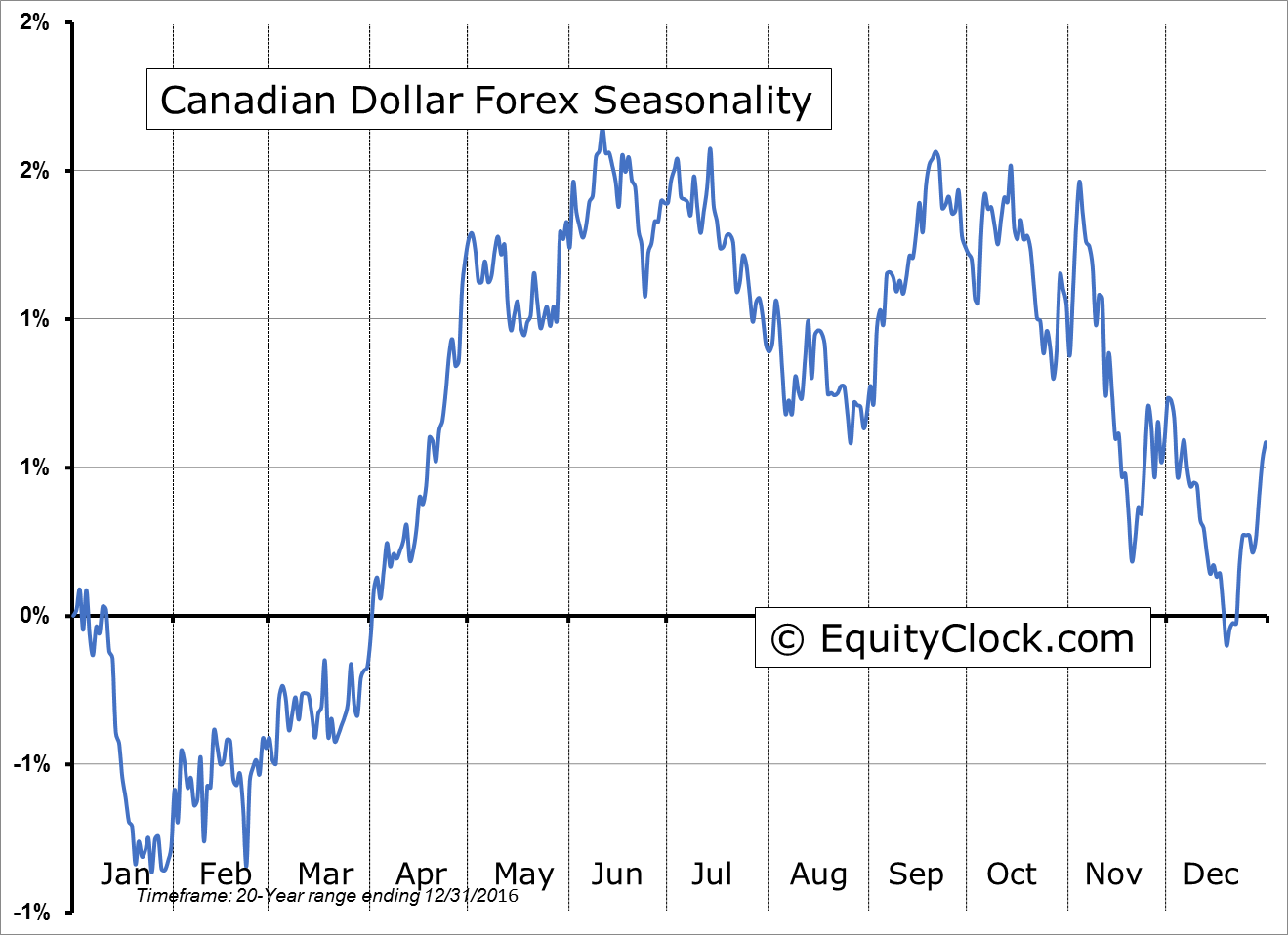 Finally, sentimentrader.com provides an optimism reading by currency traders on the loonie. Sentiment went from overly pessimistic, which is when the loonie bottomed early this year – to overly optimistic recently. I’ve circled on the attached chart times when those extremes have been reached. Note how the extremes do tend to signal a turn for the loonie. Too much optimism is usually a sign of a short termed or significant top for the loonie, and visa versa. Currently, the optimism level is over 70 on this indicator. This has happened some 23 times since 1990, says sentimentrader. Only 5 of those times led into further gains.

Some of you may be looking to convert some loonies into USD’s on the recent strength. Perhaps you are looking at a major purchase in the US- such as real estate. I’m in that situation, and here is what I did and am doing.  I converted half of the amount I wanted to covert about a month ago with the idea of 0.80 as the first point of resistance. I decided to hold off on the other half on the potential for a breakout—which has now happened. I will do the other half anywhere at or over the 0.83 area (pigs get slaughtered, so I don’t know that I will hold out waiting for 0.84). I noted an upside potential for the USD on this blog in July.

The timing on my currency conversion will likely be in the next 2 or so months per some of the above factors.

Could the loonie extend past 0.84?

Not likely, in my opinion. Beyond the strong technical factors, we still have oil near $50 (vs $90 just a few years ago) and we have rising debt in Canada thanks to a spend-happy government. True, we are seeing growth, but with other pressures such as wildfires in BC that will eventually affect the broad economy, ongoing trade talks with the USA,  unfavorable capital gains taxes on savers/ investors, and arguable business tax and wage policies potentially to be implemented –  it will be hard pressed to see growth ramping up much more. Thus, there is only so much the GOC can raise rates, and only so far the USD can fall.

Moreover, if the proverbial poop hits the fan in the East (N. Korea) – assuming no impeachment of Trump – it’s likely that the USD and Euro will be the go-to currencies—not the loonie! So – there are many risks that might slow the upside beyond a few more pennies on the loonie.

The clip to last night’s show on BNN is here.

Keith was at the MoneyShow Saturday, Sep 9, 2017 for 2 presentations