Home / Monday madness: Is today’s selloff a reason to panic?

Monday madness: Is today’s selloff a reason to panic?

I try to be as rule based as I can within a stock trading environment. Readers who have followed this blog consistently will know that we at ValueTrend held 22% cash over the summer based on some of those rules (Bear-o-meter readings, seasonality). We’ve also been following some buy-in rules in an attempt to sensibly try to take advantage of the October selloff. For example, in mid-October as markets declined, I noted that the market could continue to fall.  Before buying, we wanted a cluster, or consolidation, of up/down action on the market to help confirm the beginning of a market bottom.  Here’s the blog on that suggestion.

After we got a bit of sideways action, I then noted on this blog the next positive development – a positive move on the Bear-o-meter.

I noted that before stepping in, I wanted to see a few positive days (I tend to look for about three “up” days—see my book Sideways  to confirm a potential discontinuation of the waterfall decline.

I also wanted to see the market move over the 200 day SMA and stay there for (you guessed it…) a minimum of 3 days before entirely committing my cash.

Here is the summary of how I  viewed the recent market correction as outlined in my blogs, and what I wanted to see to buy back in:

I also offered some more musings on my buy-in strategy on this blog.

After the positive 3 days signal noted during the week of October 29th, I made the decision to step in with a little less than half of our cash (10%) on November 5th – the day before the-mid termed election date. On Wednesday Nov. 7th, we got the next signal – a move over the 200 day SMA – which stood at 2762 at that point. The count began the next day – which was last Thursday. Today (Monday Nov. 12th) is the third day of that count.  As I write, the 200 day is being contested by a break. If it doesn’t hold, I will wait it out until I get my 3 days in a row over the SMA. I can sit on my remaining 12% cash for as long as it takes to see 3 days over that moving average.

What happens if this selloff continues?

Should the market break down, and take out its February low – which was in the low 2500’s – I will consider that a new sell signal, and a potential for a bear market.  I will raise more cash if/as/when that happens (after 3 days, of course…). Favorable seasonal tendencies and a neutral Bear-o-meter reading suggest that to be a low probability occurrence.  However, never say never. 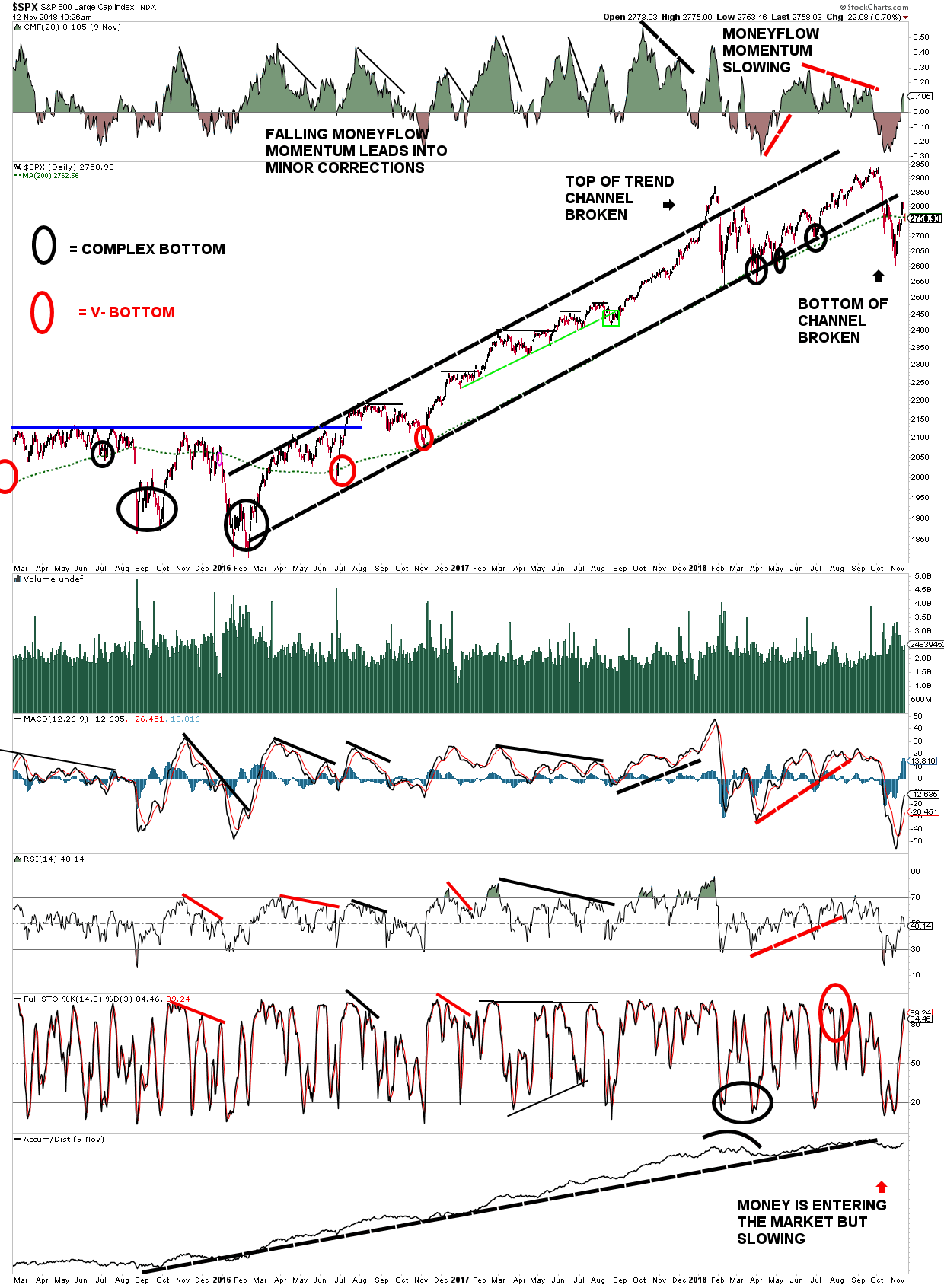 So, I stay where I am for now, invest the cash if we see three days over the SMA. We sell if the market goes below 2500. But that’s a long way off.

That’s my way of doing things. BTW—on a prior blog, I noted that trend lines can be punctured for a while – so the break of the trend channel shown on today’s chart, while disconcerting, is not an unusual occurrence. the chart above shows that longer momentum studies such as MACD and RSI are still moving up, but stochastics (a neartermed momentum indicator) is peaking. This suggests that today’s pullback is likely temporary. We shall see.

This blog is all about discipline. We are dealing with probabilities, not absolutes. To deal with those probabilities, you will  have your own way of doing things, and far from it for me to tell you what to do. Today’s blog is just an outline of my own discipline. Perhaps it will offer some insight into how you might form your own approach to this, and other market movements.

Please feel free to post your comments and questions below. I might note that I’m always looking for suggested topics—which should be on points of interest to other readers of the blog. Sectors, commodities or international market indices are good examples. I look forward to reading your input.