US Midterms are upon us today. How will they affect the markets?

Here’s a chart of the latest Predictit poll re; todays vote. Polls are currently favoring House & Senate leaning towards the Republicans.  No matter- US equities tend to weaken into elections and rally after elections. Thereafter, we are in the seasonally strong period of the year  and could see a move into year end. More on that below. However, it may be difficult for markets after that point. We’ll cover that when we get there.

Meanwhile…Oil could be an exception. After the elections, the White House might start to phase-out Strategic Petroleum Reserve (SPR) releases. There is no immediate supply emergency and the need to keep oil down for the elections is gone. Separately, the EU sanctions are going into effect on Dec 5 to reduce total Russian supply by 2ml bpd (barrels per day). I expect this combined supply shortfall could give WTI significant upside into 2023.

There are also implications for the USD from the policy paths expected under a Republican vs. split Congress. Some intel form AGC Analytics: With the United States moving towards a recession in 2023, a Republican-controlled Congress is far less likely to enact a significant fiscal stimulus.  However, Democratic control of even the Senate increases the likelihood that Republicans compromise on a relief package. The debt ceiling could also represent a threat to markets as partisanship could force brinksmanship and a potential government shutdown. Last-minute debt ceiling debates tend to be dollar positive. 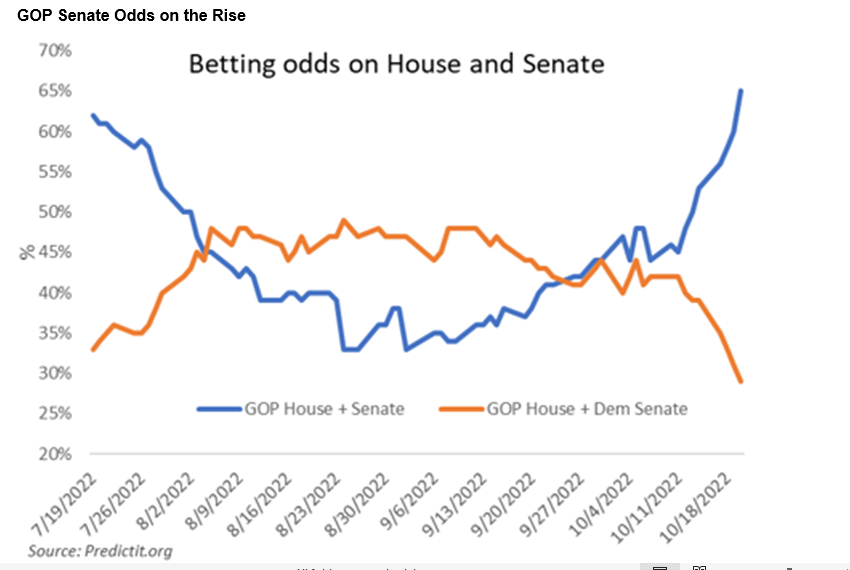 Elections and Thursdays CPI report should be watched

Given that post-elections (no matter the result) tend to lead into a bit of downside, AND the CPI report due this Thursday – We are holding off with our cash for a few more days. However, there are enough arguments that a move into year-end might make sense.

The chart below suggests upside into year-end of 4000-4100 (trend channel top to 200 day SMA). The last peak was near 4200, which could prove to be the ultimate upside potential. RSI hooked up and MACD is moving up as well. However, some weakness has appeared on that indicator of late. Keep an eye on that one. 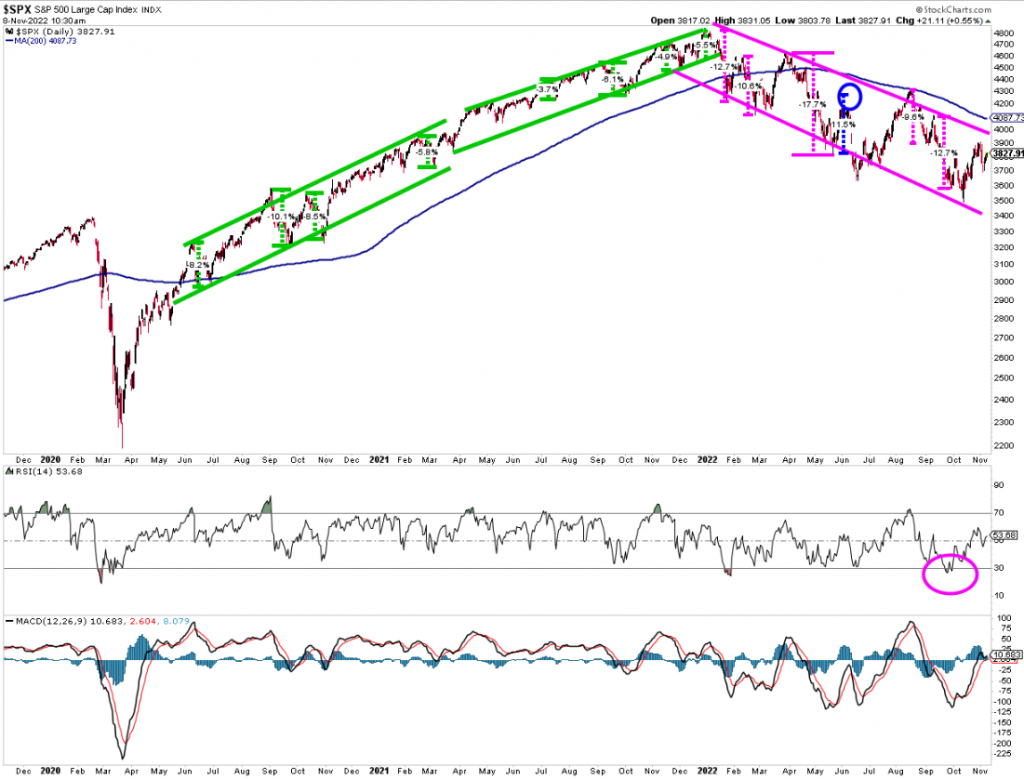 The market has had some strength based on China’s potential return to less COVID-restricted activities. However, the markets excitement may be premature. Regular reader Wendy sent me this article

“China on Saturday reiterated that it will “unswervingly” maintain its strict COVID containment policies, after a week of rumors that it would ease measures sent Chinese stocks skyrocketing. At a press briefing announced just hours beforehand, officials from China’s health commission said the country’s controversial zero-COVID policy was working and would continue, despite the dramatic toll it’s had on the economy.”

The China CZH index rallied on the recent excitement surrounding COVID policy easing. But the chart suggests a potential topping at its last peak resistance near 165. Looks like we probably shouldn’t count on China’s re-opening as a positive for the markets just yet.

My thoughts are that, if the markets pull back into the late part of this week, it might be a buying opportunity. I’m thinking there is enough evidence, including the points noted in my recent Bear-o-meter blog, to merit some strength into the end of the year or so. Oil will probably carry on much further than that time period.

I’d like to see a move over the 200 day SMA and the last high (4200-ish) on the SPX before getting too frothy, but theres likely enough evidenced suggesting some near termed profits can be had once we get thought this week.

As promised last week – I am doing a special discount on the Online TA course. If you subscribe to our newsletter, you will have received a special notice with a discount coupon in it. If you don’t subscribe-do so, and let us know so we can send out the discount code to you.