Home / Massive Opportunity may be coming

Today’s blog is detailed, but trust me, this is one of those blogs that you will want to read fully. I believe that we are on the cusp of  two colossal upside trades. I believe that these trades will be, in hindsight, seen as the “big moves” in a couple of years. Bear through the details- I believe you will find that understanding the logic and timing behind these trades as very valuable. Buckle up, dear readers!

To start: Somebody posted a comment on my blog that, in  a nutshell, politics shouldn’t be traded on. While I agree with that statement – partially- and will ALWAYS endorse using the charts as your key decision maker, it is a fact that many sectors / investments are massively influenced by political decisions. To name just a few: currencies, commodity prices, financials, infrastructure. As I noted to the reader (who’s comments I appreciated):  You can most certainly trade against political stupidity! That is exactly how we at ValueTrend got involved in the inflation trade in 2020.

If an obvious supply crunch is in the works, and you make the following observations:

That’s what we were observing in 2020. I blogged about all of these factors back then – check for yourself on the search tool for this blog. The charts agreed with a commodity setup / inflation trade that was driven by the stupidity of our government. The oil chart was coming off of a washout, and breaking out. Boom! The ideal trade: political stupidity – with chart confirmation!

Here’s our view on a recession trade:

We are observing the following right now, leading us to believe that a recession is likely:

So – the government reacts:

Once the late-as-always governments figure that there really is a recession, they will begin backing up their tightening-talk.

The next step is the path of lowering rates to get them out of the problem they caused to begin with.

Then they will restart the money printing machine. Deja vu!

The good news is that – once again – you can trade the stupidity. During the bear market (now) you should have defensive positions and cash.  That cash will come in handy soon. Markets tend to rise as they witness the policy talk changes that I just talked about. You don’t need to be coming OUT of a recession to witness the early stage of a bull market.

IMPORTANT: The key to this year’s market strategy will be to watch the Fed and BOC for a changing monetary rhetoric. Then, look to the charts for a base, bottom and breakout – as I teach you to do in my Technical Analysis Course. Please note that the course price changes to $397 effective July 1, 2022.

Here’s our case for the energy trade

My continued argument for energy producers as a place to be comes down to common sense. Let me explain:

Before you ask: THERE ARE TWO ARGUMENTS AGAINST ENERGY

So….Don’t be dumb! Buy a solar stock, or Tesla, not an energy stock! Right?

Am I crazy to buy energy stocks?

Do you want to make money now, or do you prefer to wait for half a decade?

We aren’t in a time machine. Ironically, right NOW there is a colossal energy re-investment cycle forming. According to metrics I am reading, the planet is $2-3T (that’s trillion!)  below the previous 2010-2014 capex trajectory for oil, gas, metals! Meanwhile – the global population is 600m higher! Over the last 20 years, we have exported 7 million jobs out of the USA to India, China, Vietnam, Bangladesh etc.. So we have hundreds of millions of families that consumed zero fossil fuels in the last two cycles. But now, as their countries develop and embrace new found wealth and capitalism, they are consuming at an accelerated pace. And then, there’s the demand in North America and developed nations coming from the re-opening of the post-COVID economy.

All of this, in the face of previous energy infrastructure and development shutdowns. If our governments incompetence wasn’t so negatively impactful on ordinary people, I’d be laughing.

Regarding the “recession is bad for commodities’ argument, I’d like to offer one other factor to the case for oil. Similar to 2008, China has been far more accommodative than the US Fed and most other central banks. China’s re-opening + an accommodative fiscal posture is supportive for the global economy and commodities, if history is a guideline.
If the Fed backs away from its tightening policy path slightly, as I note above in my case for a recession, this speaks to a big negative reversal for the US dollar and likely upside for commodities.

Here is the bottom line:

The entire planet is craving global oil. And energy infrastructure. Suddenly, there’s a  move back towards development of energy assets – after years of government suppression! They could have saved us all a whole lot of inflation if they hadn’t been so stupid to see the obvious in 2020, but if you read this blog in 2020, at least you made money on that trade.

But here we are again, energy has declined somewhat. And herin lies the opportunity – the background is set, and prices are not overbought any more (I did mention that I reduced oil a couple of months ago). There’s likely an energy trade coming soon to a theatre near you. You CAN trade against political stupidity!

2020: “Oil companies, you’re all dinosaurs, we want you out of business in about 12 years, we’re actually thinking of suing you for being an oil company.”

TRUDEAU IS NOW LOOKING TO EXPAND ENERGY INFRASTRUCTURE … After 5 years of shutting it down…!!!!!!!

This is a colossal failure of common sense – and our politicians have no clue how long it will take to turn this ship around.

But that helps you and I earn some profits, methinks.

The chart must support the setup

As noted at the top of this blog, the chart MUST support the political stupidity-setup. So, lets see if it does:

Below is a longer termed view of WTIC. Energy hit $140’s in 2008. There is a big resistance lid at $110 right now that has to break in order to see that old high. We have bullish MACD, but a negatively diverging RSI. This suggests that the breakout is yet to be seen. So – recall my rules for entry on a breakout–you need a good chunk of time-minimum 3 days, up to 3 weeks, to confirm a breakout through $110. BTW–there is no reason for the 2008 highs to remain a barrier for price if the above fundamental factors remain in place. 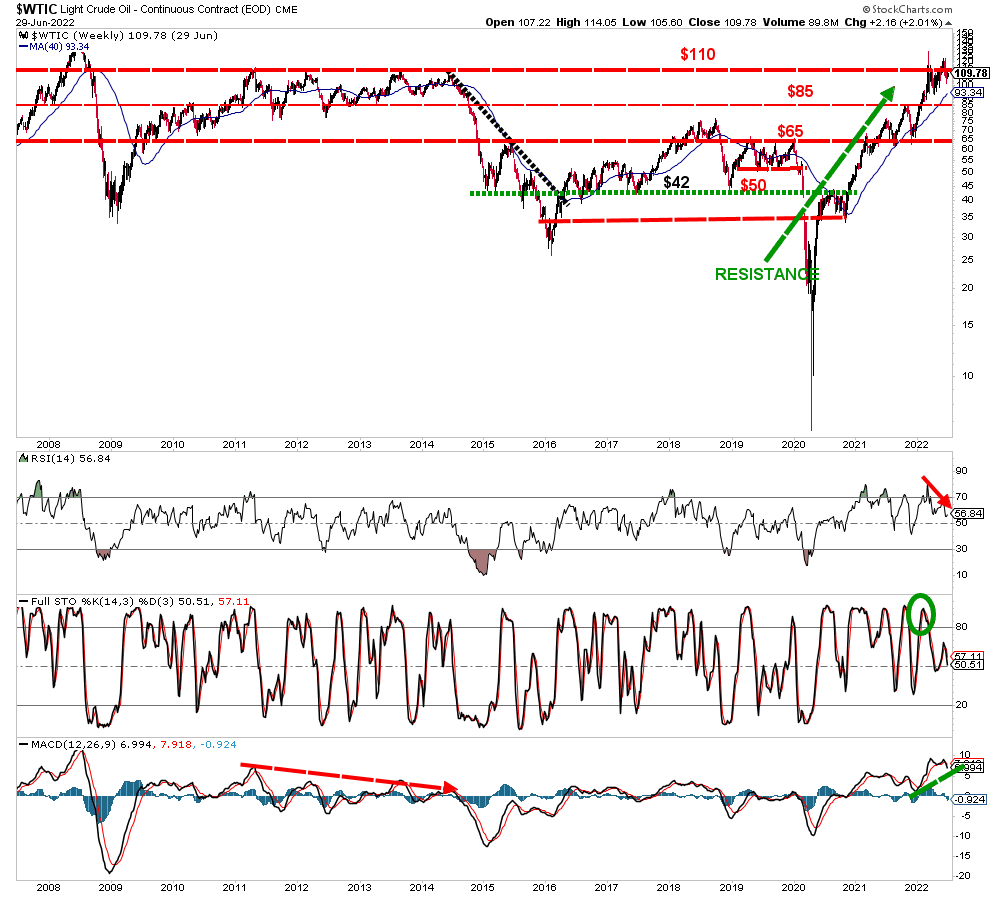 Now lets look at the producers

The iShares XEG ETF is a good benchmark for CND producers. If Justinflation Trudeau wants to reverse his stupid decisions on capping production, noted above, Canadian producers would benefit. The chart shows us a clear move towards oversold conditions on RSI and Stochastics. MACD remains bullish. But there’s that lid again. Resistance near $18 is strong – and was tested unsuccessfully yet again recently (one of the reasons we took more than half our energy out of the platforms we manage). If we see a breakout, we’d buy. We might even attempt a trade from the oversold conditions in a month or so. But the safe bet is to buy the breakout – same rules as always (3 days-3 weeks). 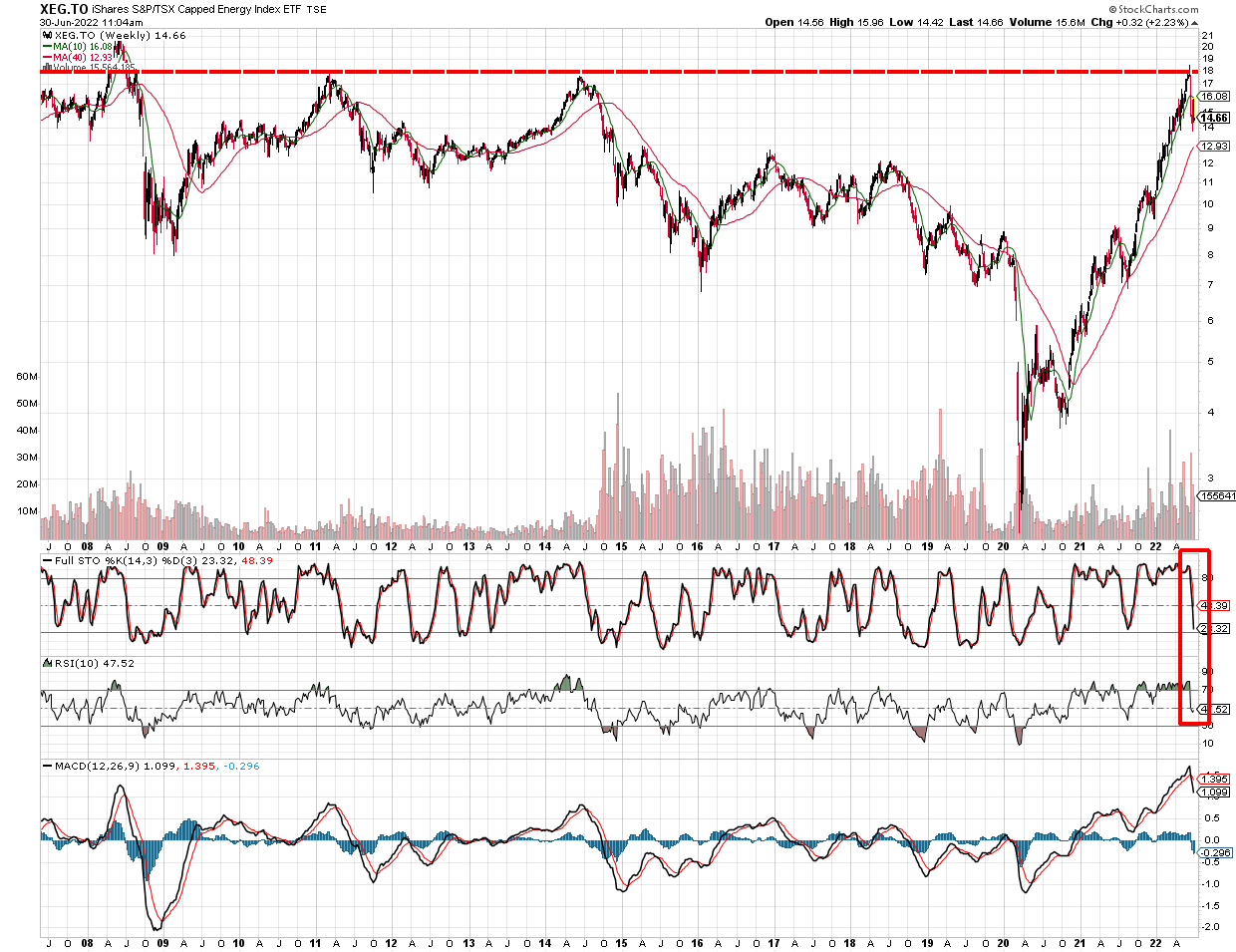 There may be a massive opportunity to play a Fed/BOC policy change if/as/when the charts confirm the move, as described above. Broad markets and growth stocks would benefit most. Think technology and NASDAQ. There’s also an argument for enormous profit potential as energy producers finally get some respect.

The time to trade either of these scenarios is yet to come. But, in our view, they are coming possibly as early as this fall. As I always say: You can’t fix stupid. But you can profit against it!