Home / Market rally may continue, but beware the “niggles”

Market rally may continue, but beware the “niggles”

I own an older model Porsche. I like it because its a purist car – a true drivers car for those who want absolute connection to their vehicle. Manual tranny (essential for the purist driver) with a short shifter and race clutch, hand brake for drifting at the track (should you choose to do so), minimal weight without all the modern toys, minimal driver aids, and a steering wheel with no buttons. Even my daily driver is the last of a dying breed – its a sports sedan with manual tranny, hand brake and stiff suspension. Minimal luxury, that’s my game. No third pedal = not the car for me.

My friend is the polar opposite of myself from a driving perspective. He has a big German cruiser. Its got horsepower, but that horsepower has to pull 1500 lbs more than my Porsche, and corner with that bulk. Tons of drivers aids, a computer in the dash that defies imagination (he can choose from essential oils for the incoming air vents).  We laugh about our driving style differences.

One of the things about owning an older enthusiasts car is that they all have “niggles”. That’s what a car magazine I recently read called them. For example, the Porsche burns a bit of oil. So I have to check the oil level after about 5000 km and add half a quart. The engine is in the back, so it wears rear tires out like nobody’s business with all that weight upon them. And so on.

Why mention all of this car stuff? Well, first of all, I’m going through seasonal remorse, seeing as the dreaded day of winter storage is only 2 weeks away (sob!). Writing this was therapy. More important for you is understanding that the market has niggles too. Its like an older car. Stuff happens, and you have to deal with it if you want to be an equity (or enthusiasts car) owner.

Right now, we have a technical setup for the SPX to return to 3500 or so. The chart below is one I use for short termed timing insight. It provides evidence for neartermed moves. Testing an upper or lower Bollinger Band with a subsequent hook on stochastics and (even better) RSI typically suggests a bounce to the upper band is likely. That’s what the setup is right now. We recently saw a bounce off of the lower BB, and a nice hook on stochastics. RSI is hooking, albeit not from an oversold level. That indicates a rally, but not a big one. A target of 3500 comes from the top BB level. That’s a 5% gain from here. 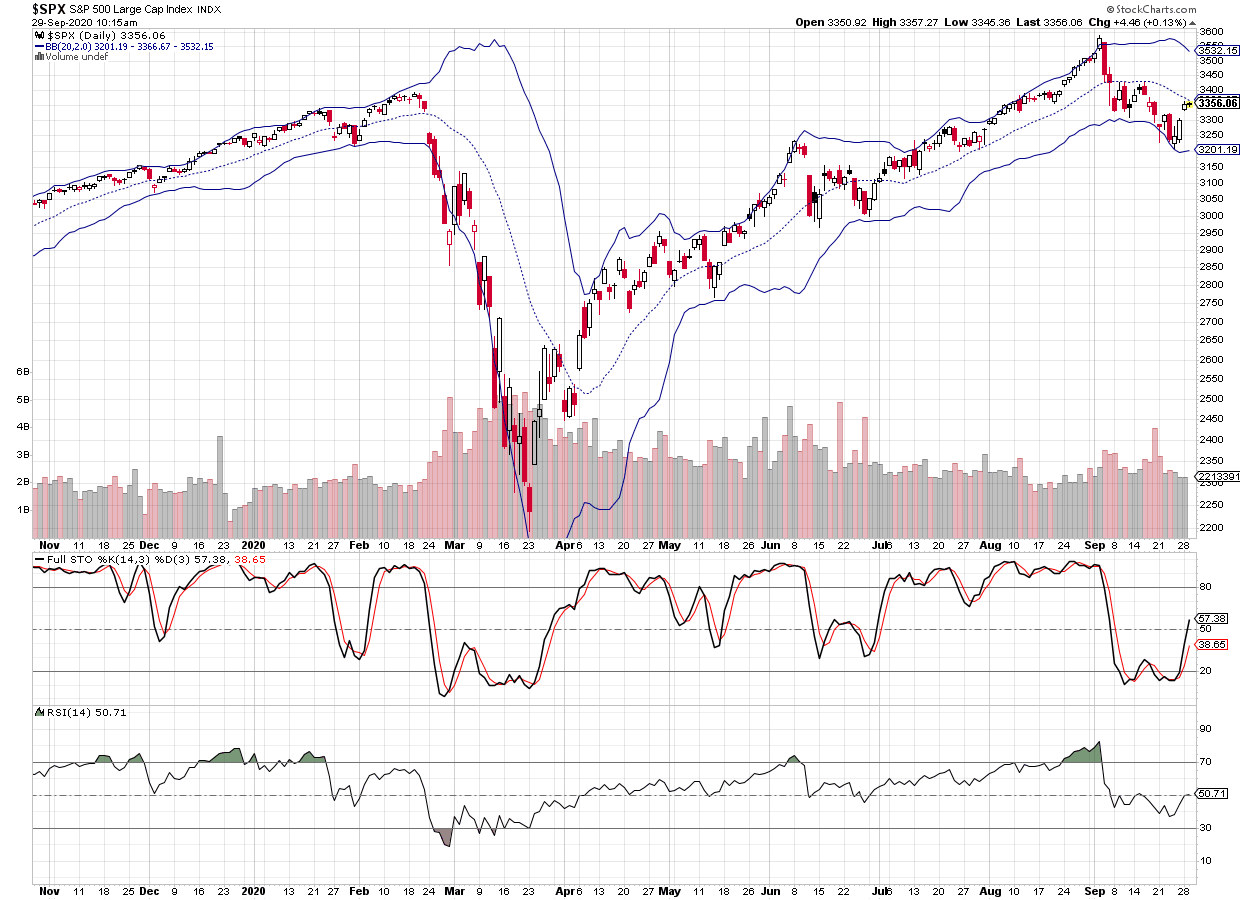 The niggles on this rally are threefold.

First, we have that seasonal thing when it comes to October. October is actually not a statistically bad month insofar as most Octobers are actually bullish, according to Brooke Thackray’s “Thackray’s Guides“. But its the month that when things go wrong – they go REALLY wrong. So what could go wrong? Well, there’s that debate going on where the Democrats want something like $2T in stimulation in the next bill, while the Republican’s want $1.5T. Will either get their way or will the stimulation debate delay anything happening?

Next, there is that election thing. Markets may be bullish during most Octobers, but they are particularly vulnerable in Octobers coming into an election, statistically speaking. Check my prior blogs for the stats.

Finally –  Markets are not oversold on the more important time frames like the weekly charts (see below). MACD  (second pane from the bottom) is just starting to hook down – a bearish sign for the mid-termed picture. This suggests that a bounce to 3500 is not likely to repair the bigger overbought picture. 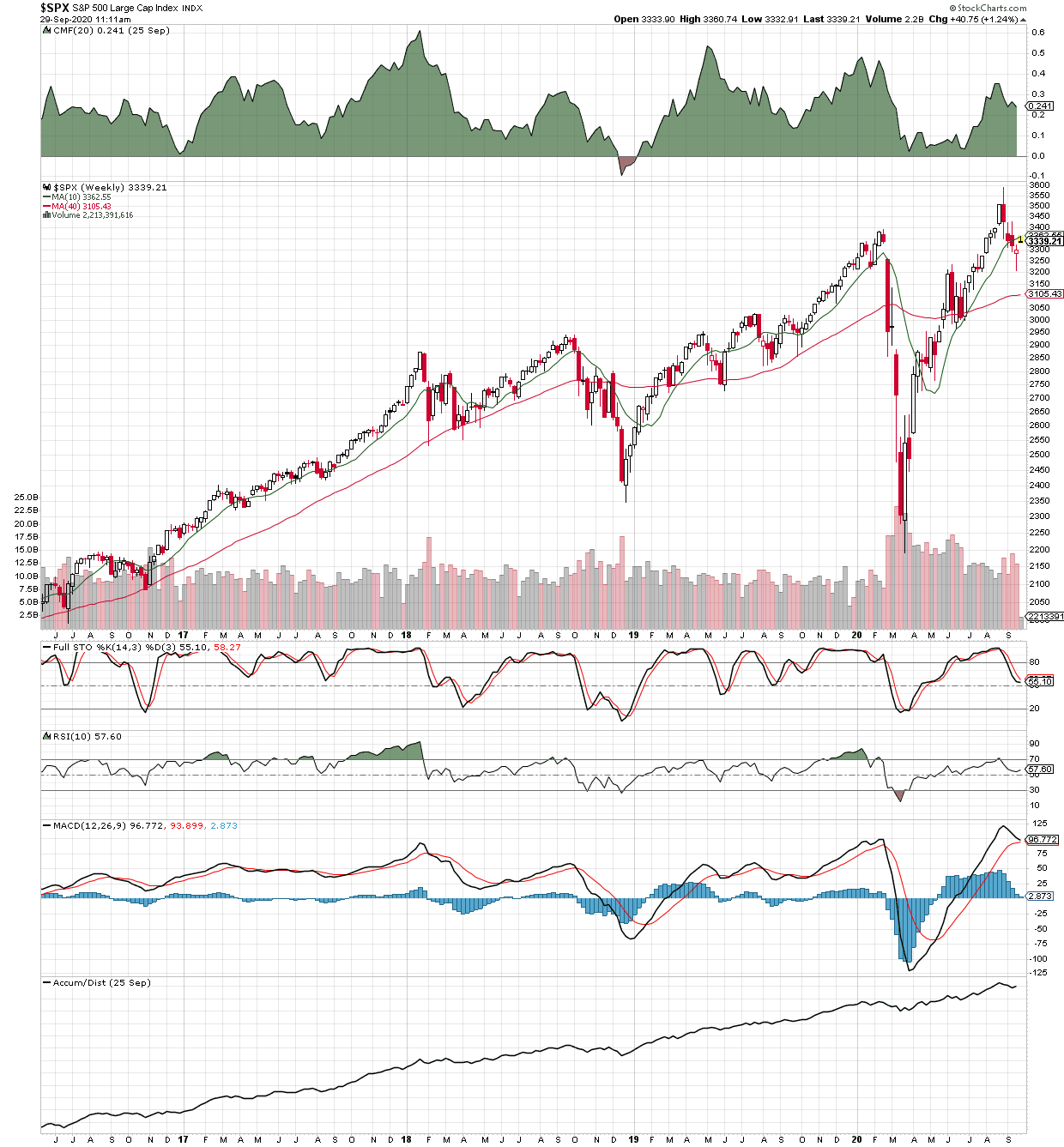 As Technical Analyst David Chapman notes in his typical tongue-in-cheek manner: “It is 36 days to the election and the number of coronavirus cases are rising, global deaths have passed a million and an incumbent president is hinting he won’t leave office even if he loses because the election is a fraud. What could possibly go wrong?”  Actually, its not just Trump who might call the vote a fraud. Biden has uttered the same sentiment. Things like this can only cause market mayhem until settled.

My thoughts are that the market will move into 3500 or near enough to it. But I am not convinced that the move will be very long lasting. I’m not looking for any long lasting bullish move until the election is behind us. Whenever that happens…