Home / MACD may signal the bottom of this crash

MACD may signal the bottom of this crash

Last week a wild one for markets, to say the least. Today carries on that tradition. The Bear-o-meter reading that I took last week provided a simple message, in my experience: the stock market will most likely rally significantly over the coming months, but there’s also a high probability that markets will continue to experience significant up/down volatility in the very nearterm.

Today I’d like to look at how we might determine when the end of this horror might come. Although the December 2018 crash reversed upwards in a straight line, most historical stock market crashes saw significant up and down volatility before the market recovered. This is known as “complex” bottoms. Its the norm.

The stock market’s decline this week was one of the worst in history, matched only by:

Lets look at the last two of that list. Below is a weekly chart from the 2001 crash. Note the flattening MACD (divergence) against the falling market in the late stages of the crash. Note the turn-up in MACD at the time of the bottom base. 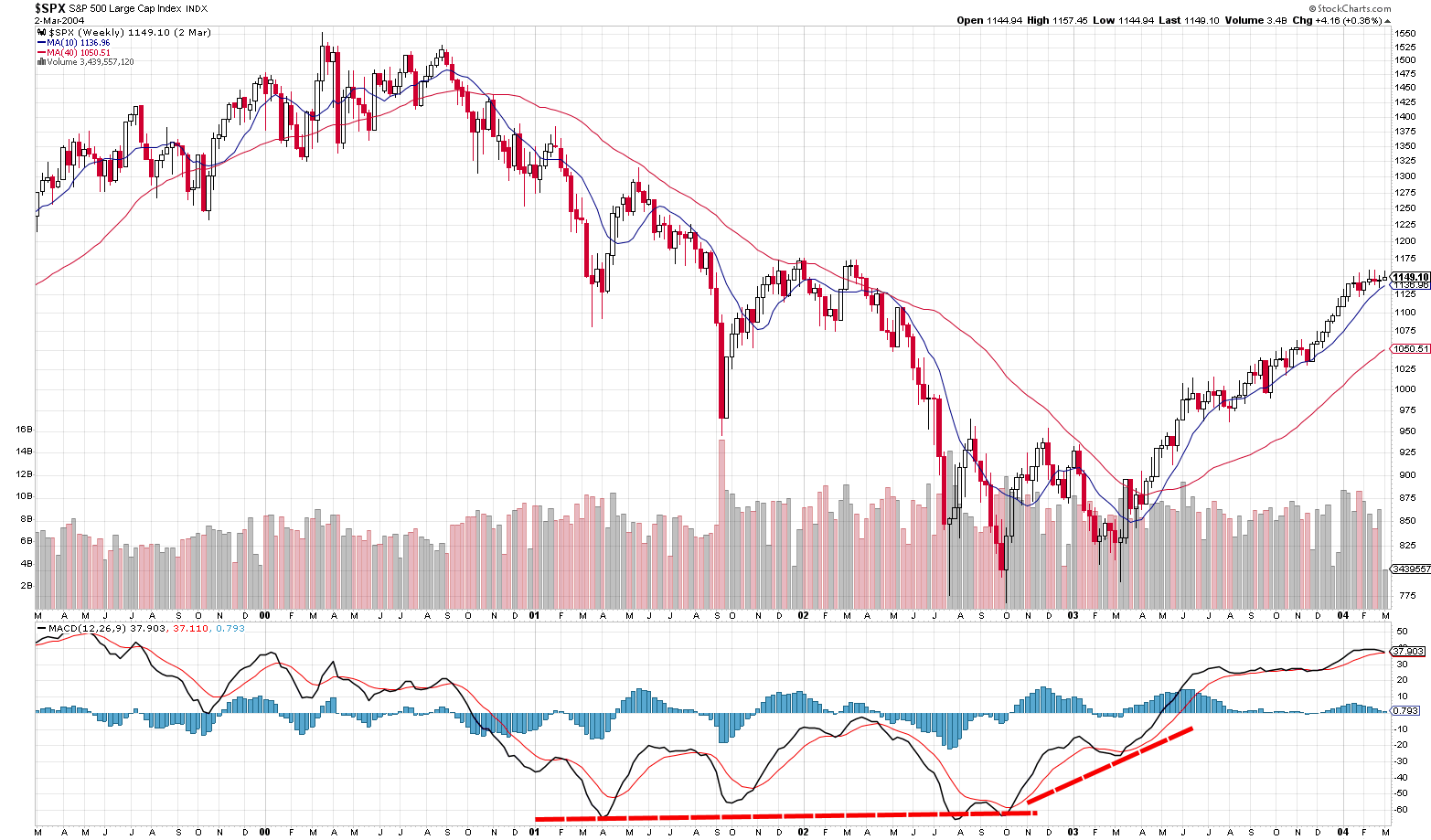 Here’s the 2008 crash. Note the diverging MACD leading into the bottom. 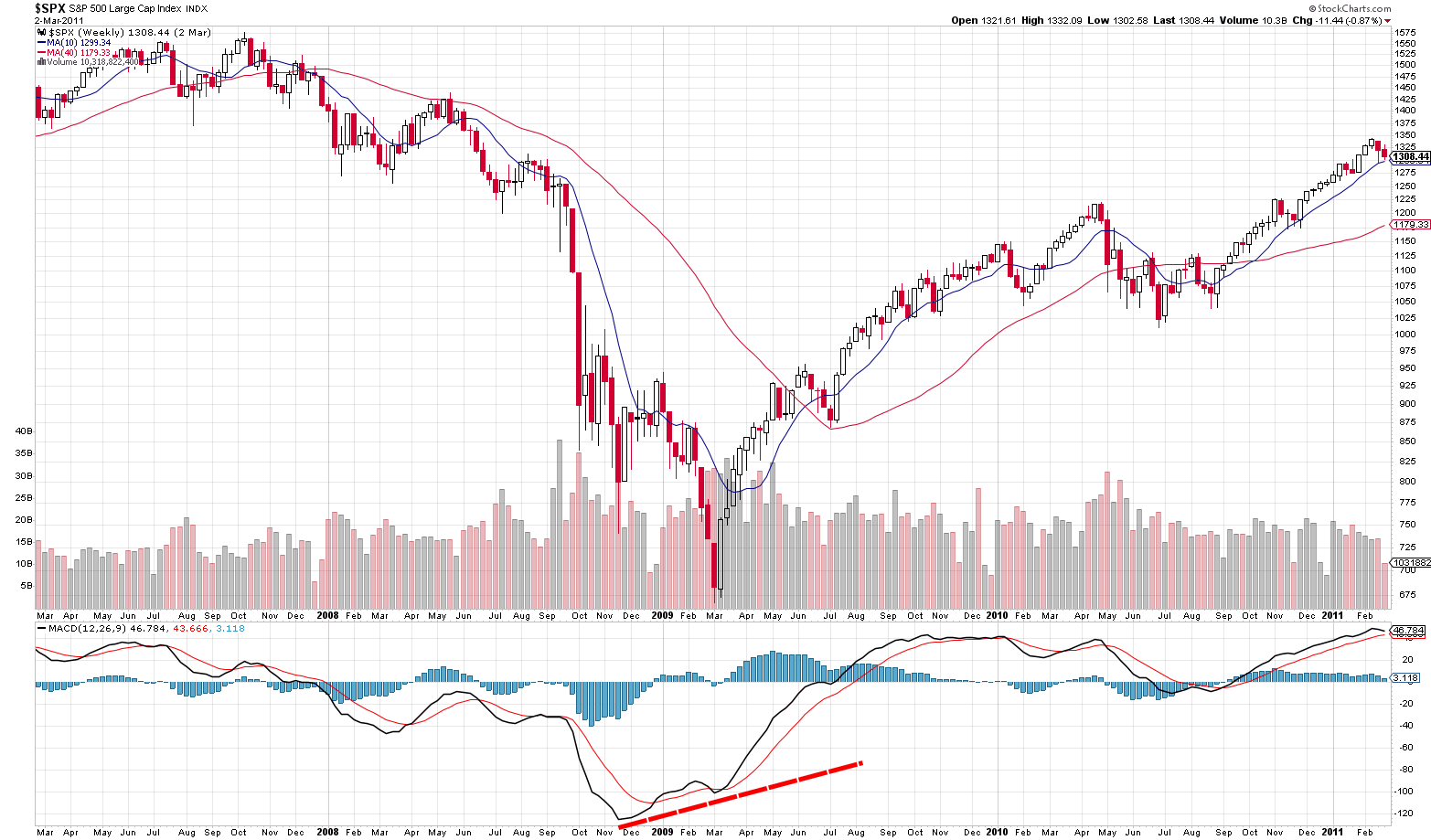 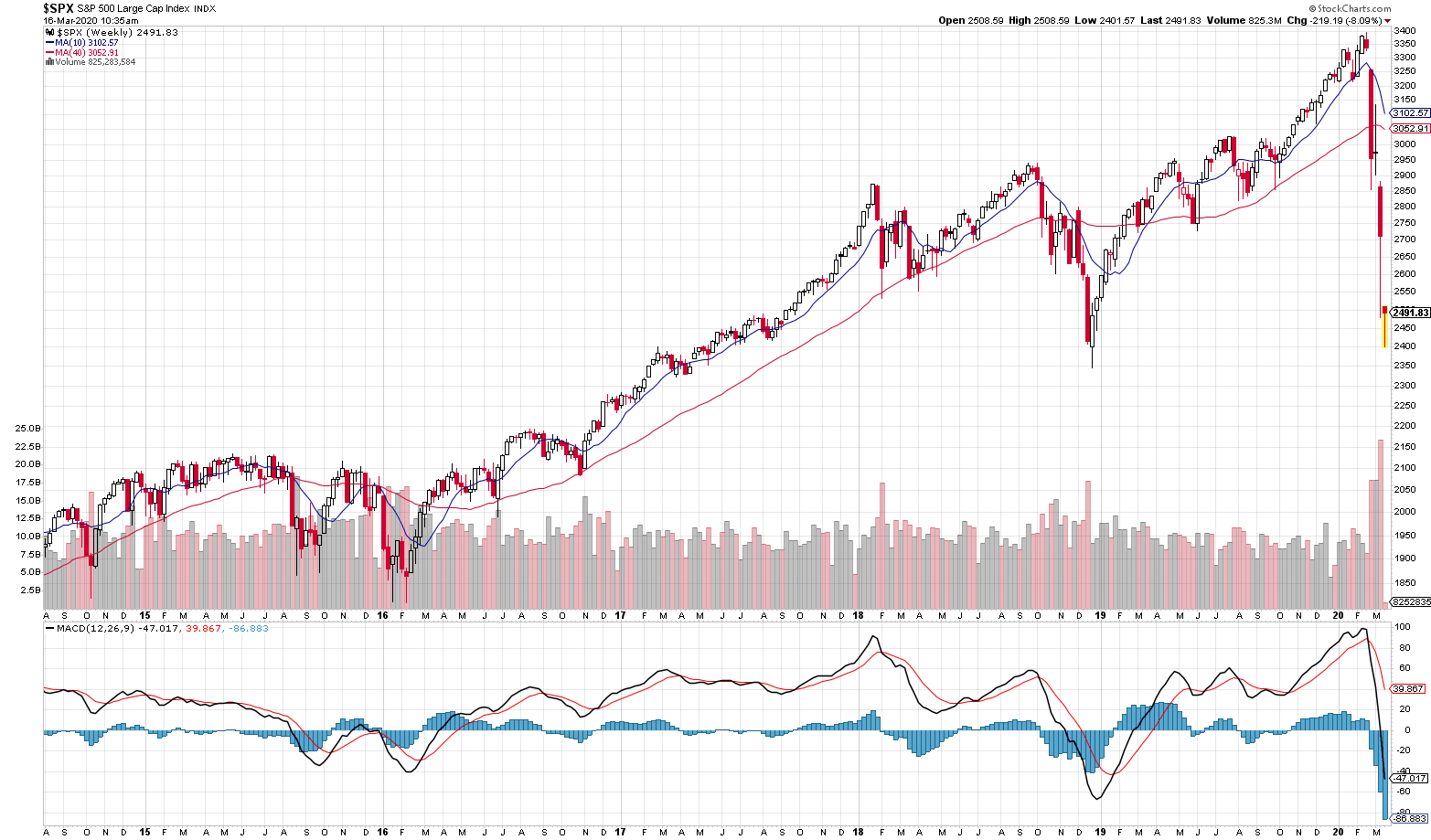 So, look for a MACD divergence to signal an end to a complex bottom. In the meantime, we are likely setting up for a nearteremd spike on the tiniest bit of positive news. Like last week, I’ll provide you with some new excerpts from some of the research I follow:

Quote from Jason Goepfert at Sentimentrader

At any point, even nominal good news in the virus fight could send stocks higher by 15% in minutes…and vice-versa. Volatility will be enormous, to the point where they may have to temporarily close trading for days on end. Based on everything we’ve looked at, we should still see higher prices over the next couple of months, even within the context of a protracted bear market and recession. It’s just hard to rely on “should” when we’re essentially required to fly blind. However, the volatility we’ve seen lately is extremely compelling from a medium-term point of view. Virtually everything we’ve looked at suggests a strong probability of gains over the next several months, even within the context of a potential bear market. With an increasing sense that government entities will finally do anything it takes, and signs of progress in isolating and testing for the virus

Quote from Larry McDonald of BearTraps

Our team believes stresses in equity and credit markets will force a colossal – global policy response (get long commodities). In the US, there is a rising probability of swift action coming from the executive branch and Congress, delivered in separate packages. Likewise, on March 18th or sooner, we will get 75-100bps of love out of the Fed – a vast expansion of their powers, a new tool kit will make its debut. We believe the US entered a recession in Q1. The bear market in US equities will last at least a year – but many sectors have been in a bear market for years (energy, materials, and some emerging markets) – these unloved groups will lead markets out of the bear’s grip. Trillions of dollars will flow out of crowded US assets and out to the RoW, as the safe haven has surrendered to the bear.

Imagine its 2025. You’re trying to describe this crash to a newbie-investor. Here’s what you might relay

I’ve borrowed some comments of Technical Analyst David Chapman and paraphrased his work for this story:

There was nowhere to hide. The Corona virus caused market panic unlike anything I’d seen. Everything was on sale – stocks, commodities, oil. Even gold, and other defensive positions like bond prices fell as the fear persisted. It was a crash for the record books.  The monetary authorities were ineffective. The politicians were befluxed. And behind all this carnage lay a mountain of debt after years of excessive stimulation. But the damage had been done, the market had swiftly transitioned from a 10 year bull to a bear in record time. Everyone knew it was coming. But TINA ruled for so long, it became dangerous to be out of the market, even for a week. The runaway market wouldn’t stop for Brexit, the defaulting loans of Italy, Hungary Greece and Spain, the bombs going off near Korea, war threats from Iran. You name it. TINA was in charge. Until she wasn’t any more.

But I knew that crashes go through different phases. Often the first phase of the crash is the most shocking one. Then comes the recovery where everyone thinks the worst is behind us only to discover it is not. Fear and greed.  Fear dominates the first phase. That’s where we were in March of 2020. That soon set up a tradeable rally and helped repair broken portfolios.  I took advantage of it, and played the rallies until the market completed its crazy up/down gyrations.

This too, shall pass.