There are quite a few ETFs coming out these days marketed as “low volatility” securities. IShares has quite a host of these low-vol ETFs representing various international markets. I will disclose that I hold the iShares US minimum-vol ETF (XMU-T) in the ValueTrend Managed Equity Platform. BMO has a Canadian product that I also own a significant chunk of in my ValueTrend Managed Equity Platform. The BMO low-volatility ETF (ZLB-T) holds the 40 lowest beta stocks of the TSX large caps.

Regular readers of this blog know that I am looking for a top on the markets to occur in the next few months. Valuations, cyclical patterns and significant overhead technical resistance have influenced me to plan around this potential. It is for this reason that I have slowly been replacing higher volatility equities with lower beta securities. These ETFs and certain low-beta individual stocks are part of that plan.

For those who are unfamiliar with the “best six months” seasonal strategy, you buy the index in November, and then sell in May to hold cash for the following six months. An interesting premise was explored by BMO surrounding their low-volatility ETF mentioned above. What would happen if one were to buy the TSX index (or perhaps buy an ETF of the S&P TSX top-60 index such as Horizons S&P 60 ETF or the infamous iShares TSX S&P I-60’s) for the “best six months” seasonal cycle. Then, during the “worst six months” you buy the BMO low volatility ETF in May and sell in early November. Theoretically, you would be getting all of the beta from the TSX 60 index when you want it during the best six months, and then reducing your risk by owning low beta stocks in the more risky six months. Below is the table for that strategy as reported by BMO capital markets. The data goes back to 1996, so it is not as long a period as the seasonal studies done by Don Vialoux or Brooke Thackray (who have tested back to 1950—see Thackray’s Investor’s Guide)—but it’s a large enough sample to give us a taste of the performance over the recent flat markets, plus the tail end of the last bull market (1996-1999) 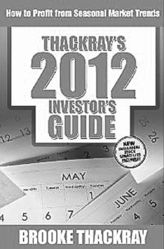 One conclusion that can certainly be drawn from the timeframe studied is that the buy/hold low beta ETF approach beat the rotational strategy between the TSX and the low beta ETF using seasonal patterns. I don’t have the precisely matching data for that period of time using the “best six months” seasonal strategy for the TSX using the index to cash, then back again–because BMO’s study started in December 1996 for some reason. But Brooke Thackray did very kindly provide me with the more typical study. His data goes from November 1st, 1996, sells every April 30th until 2012. Over his time period, the TSX buy/hold strategy averaged 6.05%, while the seasonal buy November 1, sell April 30 of each year during the time period averaged 7.11%.

My conclusion from the BMO data is that, given the time period studied (starting just before the onset of the secular sideways market), low beta has won the race for buy and hold. In both Brooke’s study using only the TSX, and in the BMO study using their low-beta ETF, the seasonal strategy beat the TSX buy/hold strategy. Perhaps that outperformance would be amplified if one were to rotate in and out of high-beta during the “best six months”, rather than just the TSX.

Either way, I believe that these studies show us seasonality does work for the TSX, and that low-beta has worked as a stand-alone strategy during the recent secular sideways market.

As we continue our book promotion tour, I’m speaking at the Notawassaga Inn on Saturday February 16th at 10AM. The topic will be on investing for income, and the technical outlook for the markets. A continental breakfast will be served at this free event. Join us if you can.