Home / How to lose your money as quickly as possible

How to lose your money as quickly as possible

As some of you may know, I’m kind of an old dog in this industry. Despite my “young” 56 years of age (ha!) – I started as an Investment Advisor at 28 years of age – in 1990. It’s now been 28 years of industry experience – exactly half of my life!  Prior to that, I had been investing a (then) small account personally. Before getting into this industry, I was in a different arm of finance – credit/collection rating services.  Professionally and personally  I have been trading, investing and involved in finance for more than 30 years. This old-dog experience afforded me to experience the 1987 “Black Monday” crash (my first day on the job at credit firm Dun & Bradstreet was Black Monday!), the rising interest rates of the 1980s, and then falling rates with the coinciding recession in 1990-92.

As an Advisor,  I helped clients navigate the waters as we witnessed numerous minor corrections, the 1998 Asian contagion/ Russian near-default, the 2000-2001 tech bubble, and the sub-prime / oil crash of 2008-09. It was the tech crash that inspired me to create a more rigid screening process for market risk. Yeah, I held some Nortel. Thankfully I sold it around $40/share, but only after it had climbed to $120. Mud on my face there! The lessons I learned from that experience were channeled into a quantitative approach to risk analysis over the following years. This process saved my clients from major grief in 2008, and other minor corrections along the way. Some of you may be familiar with my Bear-O-meter – which is the end result of the lessons originally learned during the tech bubble of 2000.

I bring this bit of history up because I am currently spotting a couple of worries on the markets.

My first worry is that I believe that North American markets may be in the final leg of a bull market. To be clear, though, this leg can, and probably will, extend a bit further before the next bear market crash begins. I covered that very big-picture viewpoint here. And here.

The next worry is nearer term. I got a call from two individuals recently who have rather speculative tastes, and a less quantitative viewpoint of the stock market. That’s a nice way of calling them “dumb money”. These individuals (one who is friend, actually) asked me about bitcoin and cannabis stocks. One of these two individuals is notorious for jumping into theme – based investments at the wrong time with a feverish conviction of their insight’s accuracy. That’s a nice way of saying that this person buys like dumb money – at tops. I talked my buddy out of buying them. Not so much the other person. Whatever the case – the charts of these securities exhibit classic parabolic moves. The talk surrounding these securities exhibits classic bubble chatter.

Below are the charts. One is the bitcoin index, and the other is the biggest Canadian pot stock (Canopy Growth).  They are overbought from every perspective imaginable—and in a big way. Could these securities go higher before they implode? Sure they could! But, based on 30 years of trading knowledge, I will stick my neck out and say that an implosion is imminent for both of them. When…I can’t say. But it’s not going to be a decade from now before the roof caves in on these sectors – it’s going to be much, much sooner. 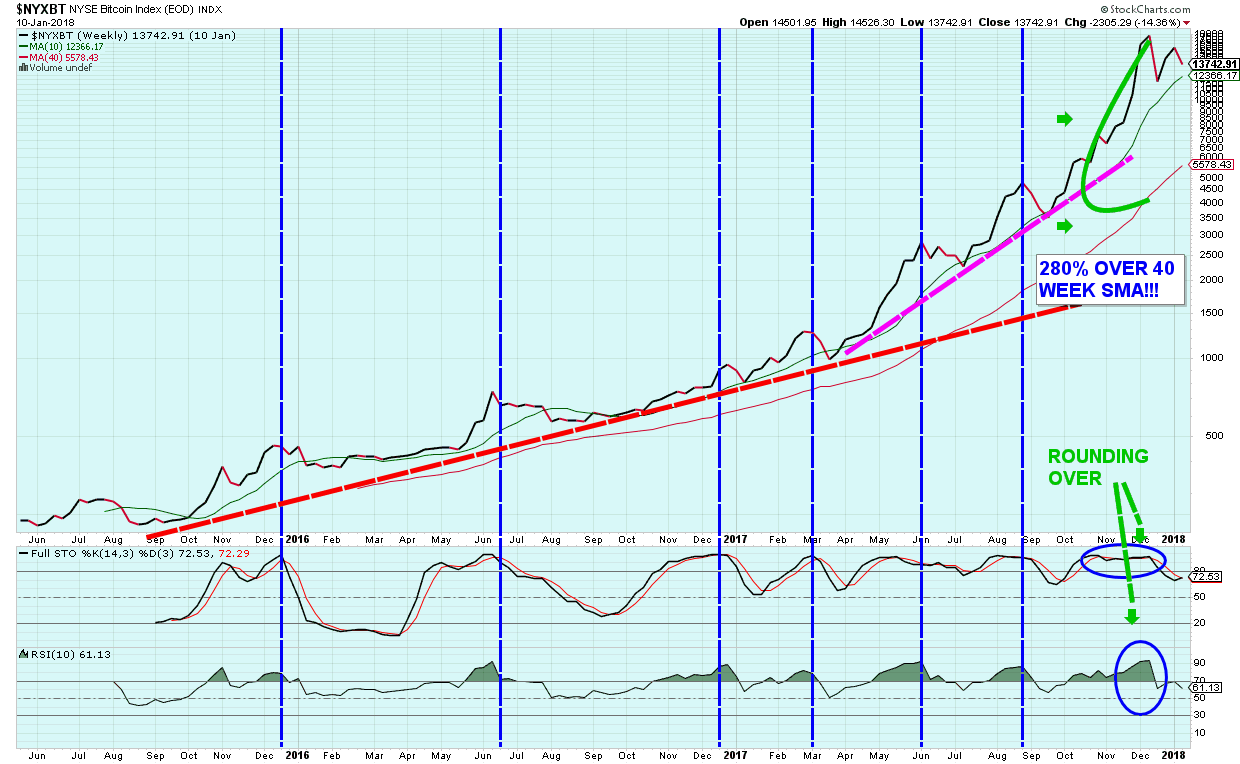 The dumb money – seen through the charts, and the day to day conversations I am having  (not usually with MY clients, I must say!) are telling me that the end is neigh. Buy these sectors only if you are a gambler who loves risk, and want to follow the dumb money.  Otherwise, avoid. 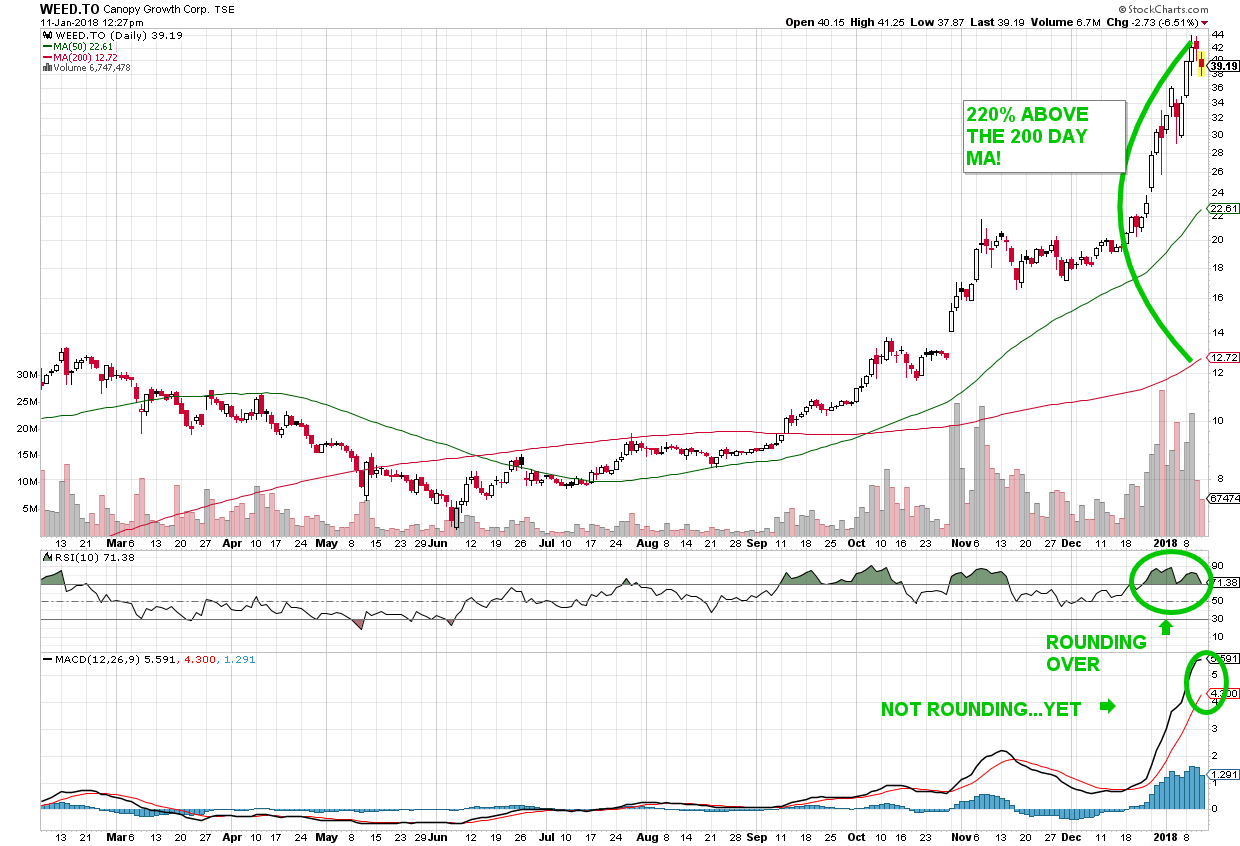 Some of you know that I speak at the Toronto MoneyShow every year. This winter, the MoneyShow has invited me to speak at their Orlando show on February 10th at 6:15pm. Honestly—who would say no to that offer, given our wretched winter weather in Ontario? If you happen to travel to central Florida during the winter, or if you have family/friends who do the snowbird routine—come on over to the show. It’s taking place in the Omni Orlando Resort –  here is the link.