Looking for the “true” market bottom

This morning, we woke up to read the newest US CPI reading at 8.2% on the year, and 0.4% on the month. Hardly down from the 8.5% reading a month ago. Markets read into this the probability of another strong hike on November 2nd.

Inflation is persistent, much of which has been driven by ridiculous spending (corporate bailouts, college loan forgiveness, gender studies, sending money to Africa, etc, etc), added massively to existing debt for NA governments. Recently, the Canadian NDP overlords pushed our government to make “inflation relief payments” (along with free dental and a other costly spending) to individuals making less than certain income levels. To quote Brooke Thackray’s recent newsletter “Governments create inflation …. and then pretend to do something about inflation by causing more inflation”

Stealing a line from Brooke again –

What seems like a long time ago, governments and citizens used to worry about how much debt governments were taking on. Voters wanted accountability and did not want to rob the future by spending now. That was considered common sense – back then, at least.

But along came Modern Monetary Policy. Please click this link if you do not know much about MMT. Anyone interested in the economy and markets need to understand its failings (which we are witnessing right now!!). Then, they cut production and increased taxation on commodities such as energy – right on the cusp of an international supply chain shortage. As I’ve noted recently, NA governments, having painted us into this hole, will have no choice but to continue borrowing and printing more money to pay the increasing servicing costs as rates rise, and to deal with an upcoming recession. It is logical to assume that this will keep inflation higher than the 2% target. Yet, the FED & BOC will be under pressure to keep interest rates as low as possible in order to service their ballooning debt. Quite the conundrum!

The Hawkish bar is SO high – any softening of the policy path will provide market relief.

Some of you may have questions of what I mean by ‘pivot’ by the Fed and BOC.  Think about a Fed/ BOC pivot as having three phases:

Here’s my guess as for the timing:

Politicians in NA pushed MMT,  with careless non-GDP accretive spending policies, resulting higher inflation, higher interest rate costs, and ultimately resulting in recession. All of this could have been avoided, had the good citizens not embraced the mathematically challenged agenda’s of vote-hungry left wing politicians. Had inflation been recognized for what it was (aka not transitory) in 2021,  we could have invoked policies removing the rampant spending and money printing.  A gradual increase in rates would have created a softer landing today.

‘Ridiculously stupid’ economic policies have the US hurtling toward a ‘perfect storm’ of economic pain, Ray Dalio says

But here we are. The faster the Fed and BOC raises, the more damage they do. Ironically, this may mean the faster they have to lower rates next year when they realize the mistakes they have made over the past several years. Unfortunately, the mistakes of current governments – including the EU, Australia etc – driven by their idealist voters – are going to cost millions of people their jobs globally. Sure, Biden and Trudeau are likely on their way out in the coming years. Alberta’s recent vote, along with the upcoming mid-term polls in the USA, suggest this trend. But the damage has been done – we are closing the barn door now that the horse has escaped. I have always believed that all voters should be forced to answer some basic questions on economics before receiving the privilege’s to cast their vote. But…I digress…

I was discussing with a client this morning how we have some potential for a washout and rally soon. But, we must pay attention to the charts for the longer termed move. Insofar as the rally potential, we are at the bottom of the bear market channel with a number of momentum indicators signaling oversold. I’m also seeing plenty of oversold breadth-momentum indicators like the number of stocks trading over their 200 day SMA’s. So, there’s that to say on the positive side. 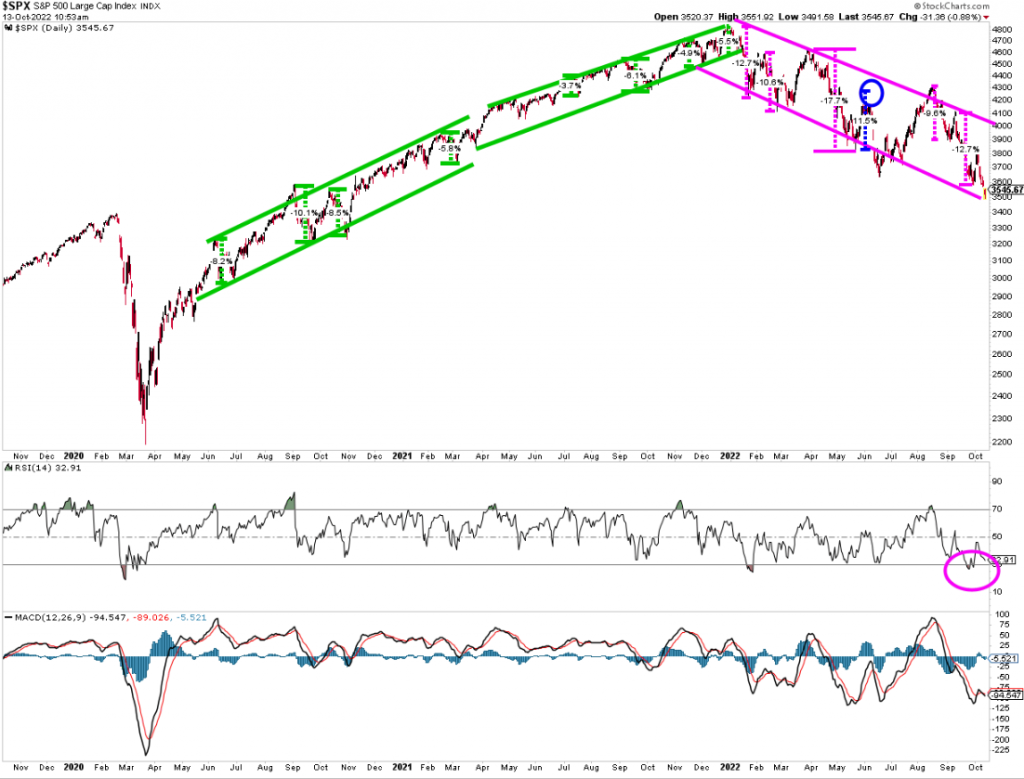 The negative for the markets include: a break of 3600, implying a potential move to 3200-ish. See this blog for the chart. That, and a lack of sentiment washout.

The puke phase – coming soon to a theatre near you!

When looking for the “true” bear market bottom, as opposed to a rally, we will probably want to see a washout candlestick such as a hammer. See my Online Technical Trading Course for more on that. That, and extreme washout in the VIX to well over 40. What this means is – you need to see a big day or two where the market reacts violently down, usually driven by a significant point of bad news. You should feel like packing it in, all hope is lost for the markets. If you don’t, we’re likely not there yet! That day, or at the end of a string of days, will likely see an impressive intra-day turnaround. As I noted to my client, every true bear has been punctuated by those occurrences. Here’s a chart highlighting the long-wick candle reversals (even seen on the monthly chart) that occurred in 2002, 2009, and 2020. Each of these marked the beginning of the end of those bear markets.

Is it a guarantee that these conditions will occur at the bottom of the current bear? Heck no! But, history typically does mimic itself on the markets more often than not. So its important to keep this in mind if we do start to see a meaningful rally appear in the near term.

I’ve just conducted a long video interview with market historian and analyst David Chapman of Enriched investing. I had to divide it into two parts, the first of which will be posted this week. I’ll alert you to the publish date. David shows us some history of bear markets, and of fiat currencies. We even discuss the rotations between empires, and how that fits into his prognostications – something I am familiar with from some of my own readings.