Home / Linear regression may show us the next bargain

Linear regression may show us the next bargain

Before we get started on today’s topic, some of you may be interested in how I plan on trading within the current market.

Are we about to enter into a new bear trend? That’s the question of the day. S&P is set to open lower. That means today–if it stays below 1990 by the close,  is the first break of the neckline support level of 1990. I will give it 2 more days. Thus–if the S&P stays below 1990 by Fridays close, and does not open higher to indicate that this week’s action was a spike on Monday, I will begin to sell on Monday afternoon. The exception would be if stochastics, RSI etc are well oversold, I can wait for a bounce.

Statistically, there are greater odds for a turnaround in the coming week (seasonal data, and some data provided by sentimentrader that speaks to the coincidence of 1.5% drawdowns in the first trading day of January vs. a rally a week after that) –so the odds are good that this is a temporary blip–but I have to follow my rules. Thus, a break in support by 3 days = sell on the 4th day. Assuming no break back above support (1990) on or before that 4th day. 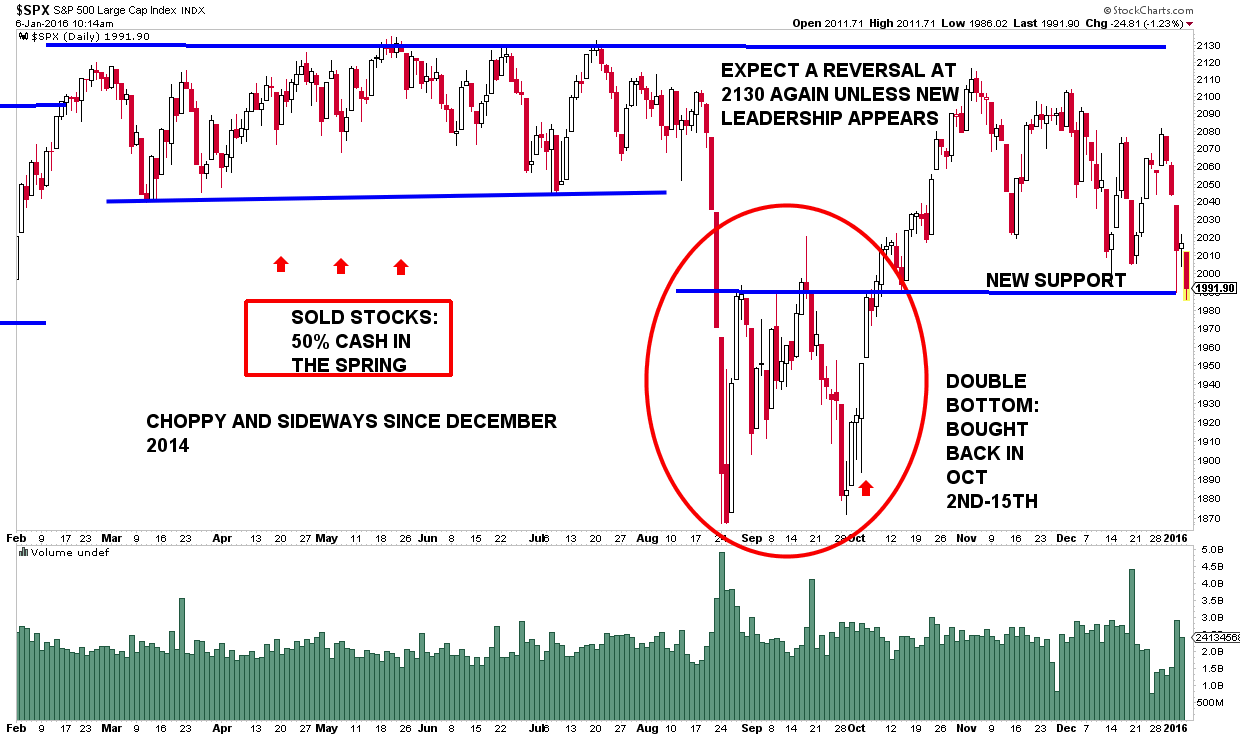 On the following charts, I chose to look at a few sectors that typically have been either higher dividend paying (per my last blog) , or have been beat down significantly – or both. On the charts, I started the linear regression lines (blue lines) at the point where the trend changed. We’re assuming that the current trend is to continue until proven otherwise. The other thing I added – in green – is a “zig zag” line. This line simply stops and reverses at a set default percent movement. I set it for 30%. This means that the line follows the trend unless there is a 30% change in movement one way or the other. Obviously I’m looking for big moves within our linear regression study.

Below are charts for Canadian banks, US and Canadian Energy stocks, Canadian utilities, and BCE (which is Canada’s largest telecom company). I’ve made notes above each chart.

The linear regression line was set on the iShares Energy ETF (XEG-T) from the 2009 lows. Since that time, energy prices, and the producers, have been quite volatile. As you will see on the chart, our zig-zag setting shows plenty of 30% swings in that 6 year period. Yikes! You can also see that the sector is getting close to the 2-std deviation low line. That line lines up with the 2009 lows.

On the US Energy ETF (XLE-US) I drew the linear regression lines going back to 2003. That’s a longer study period, thus the XLE chart contains more data – hopefully making the lines more significant. It too shows a move back to the lower line.

My take: the buying point may soon approach us on the energy sector. Wait for a consolidation before buying. I expect to blog on the sector if/as/when a consolidation may occur.

I drew the regression on this sector ETF (XUT-T) only back to 2011 given the short history of that ETF. The sector presented enough volatility to give us an indication of potential future volatility –assuming the trend doesn’t change aggressively. It appears that XUT is trading below its mean average line. Its bouncing off of the lower linear regression line. That’s probably a good sign for the sector. The zig-zag tool shows us it had a 30% drop since its last high, and hasn’t begun retracing that drop to a significant point. This sector should be one to consider for contrarian investors.

The September market malaise brought the BMO Cdn. Bank ETF (ZEB-T) temporarily down to spitting distance of its lower linear regression line. Recently, the sector rallied – then stalled out. The fruit is not ripe for picking in this sector at this time.

Negative volatility has not been much of a factor in BCE’s stock since 2009. The stock seems to comfortably trade in the upper portion of its volatility range. That’s a good thing – especially for investors who want to own a stable, high dividend paying stock. It’s not oversold – at least according to a regression study. There is no signal for contrarian investors looking for a bargain here. But you can see on the green zig-zag line that the stock has rewarded investors holding it over the past 6 years with very few sleepless nights. We at ValueTrend hold this stock in our income model and our growth model.

Of the securities covered in this study, only the utilities catch my eye right now. Energy, though, is looking pretty interesting. Let’s keep an eye on that one. At this time, I have no positions in utilities, beyond one pipeline. But that may change.