Home / Keeping a Zen mind on the Shanghai

Keeping a Zen mind on the Shanghai

The longer I’m in this business, the more I appreciate the Zen Buddhist philosophy – especially when applied to the markets. In fact, many years ago I used to attend a regular meditation group. I practiced meditation to help me develop a calmer mind for trading. The philosophy helped me deal with the neurotic behavior of the stock markets, and my own  neurotic thoughts surrounding those behaviors.

Lately I find myself returning to some of the core lessons I learned while practicing meditation. Trading patterns, Trump Tweets, and market volatility surrounding the US / China trade deal certainly can drive one to try and maintain a calmer awareness. Part of the philosophy within Zen practice is to keep an open mind to any outcome.

“If your mind is empty, it is always ready for anything; it is open to everything.”

Examining the Shanghai index with an empty mind

Unlike the less complementary meaning of the term “empty mind”, Zen uses the term to describe an open mind with no preconditioned thoughts. Lets try to examine Shanghai with a Zen mind using technical analysis. Here’s the chart: 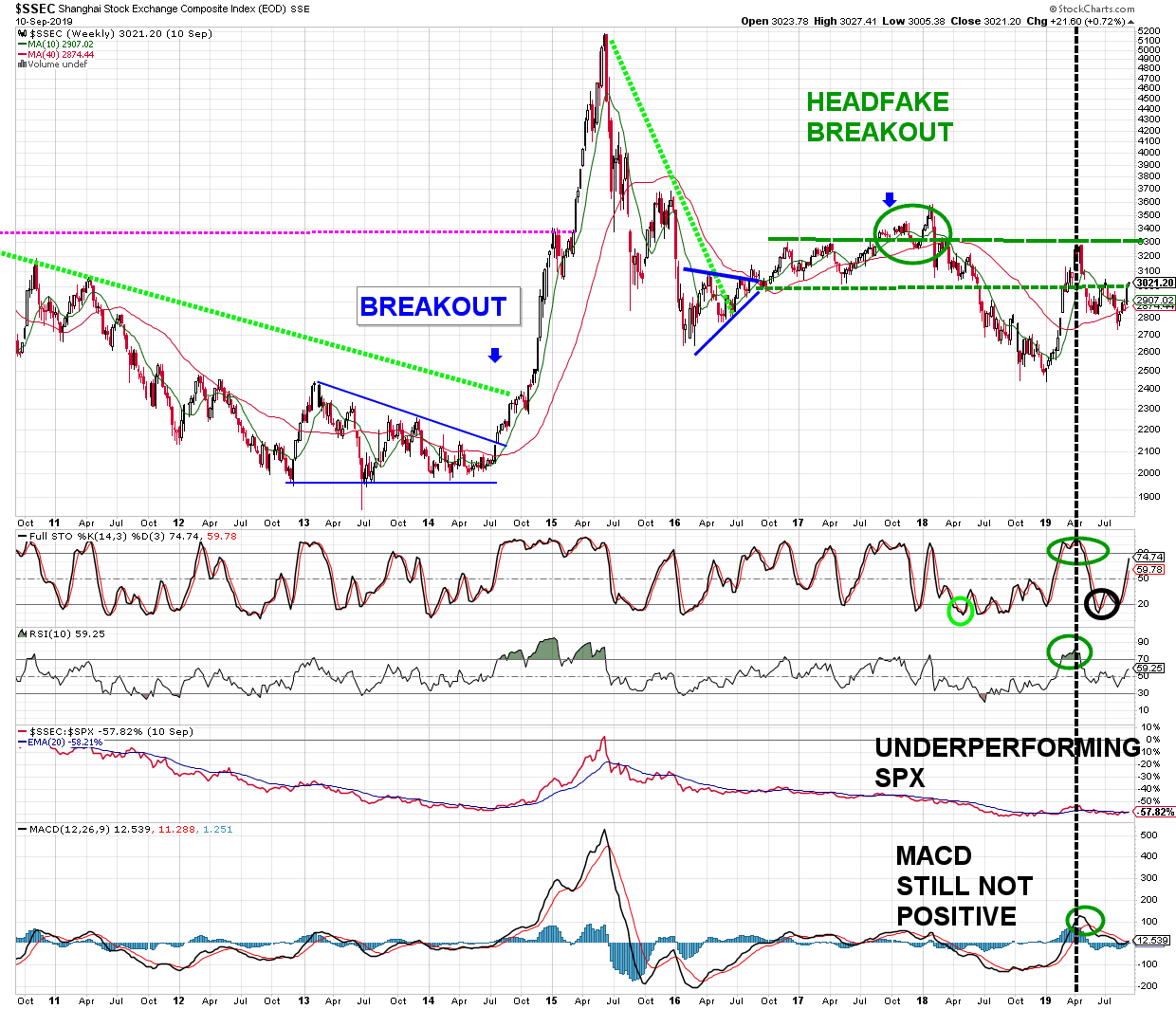 You’ll note back in April, the Shanghai tested an area of resistance of around 3300. At that time, momentum indicators on the weekly chart were overbought. I drew a vertical line lining up with that moment. The Shanghai couldn’t overcome that wall, which had been established in early 2017.  Prices declined into the 2800 area.

Fast forward to July, and you will see an oversold stochastics signal. However, unlike the overbought sell signals of April, we didn’t get an oversold hook on the longer termed momentum indicators like RSI and MACD. In fact, MACD continues to trend down, in spite of a 200 point rally back to 3000 for the index. A small hook may be forming on MACD, but it has yet to prove valid. Current resistance lies around this 3000 area–illustrated by the chart as former support during the past 3 years.

The lack of conviction behind the recent move, illustrated by MACD and RSI’s lack of participation, suggest that the Shanghai may hesitate at current levels. China continues to underperform the SPX with no signs of changing.  My Zen mind tells me to wait and see if 2800 breaks. That might suggest a return to 3000. My Zen mind also tells me that downside is also contained to the mid 2000’s. Either may happen. Or something different! However…Current patterns suggest a continuation of the sideways market.

At ValueTrend, we hold some Chinese stocks and ETF positions. Our opinion is that a trade deal will eventually be struck, and the market may react positively to such an occurrence. It could be a big move, albeit unpredictable as far as timing. So we’re in the trade, and we’re keeping an empty mind about it. Things change, we can react accordingly. For now, its best to keep an empty mind.

I’m at the MoneyShow next Friday!

Don’t forget to register early for the MoneyShow in the Metro Toronto Convention Center. I’m presenting on Friday September 20 at 4:15PM on something a little different. I’ll talk about trading capitulation candidates–higher risk/return plays. I’m looking forward to this talk! Here is a link to register, and find out more about my talk. Pre-registering doesn’t cost you anything, and helps you avoid the registration lineup. 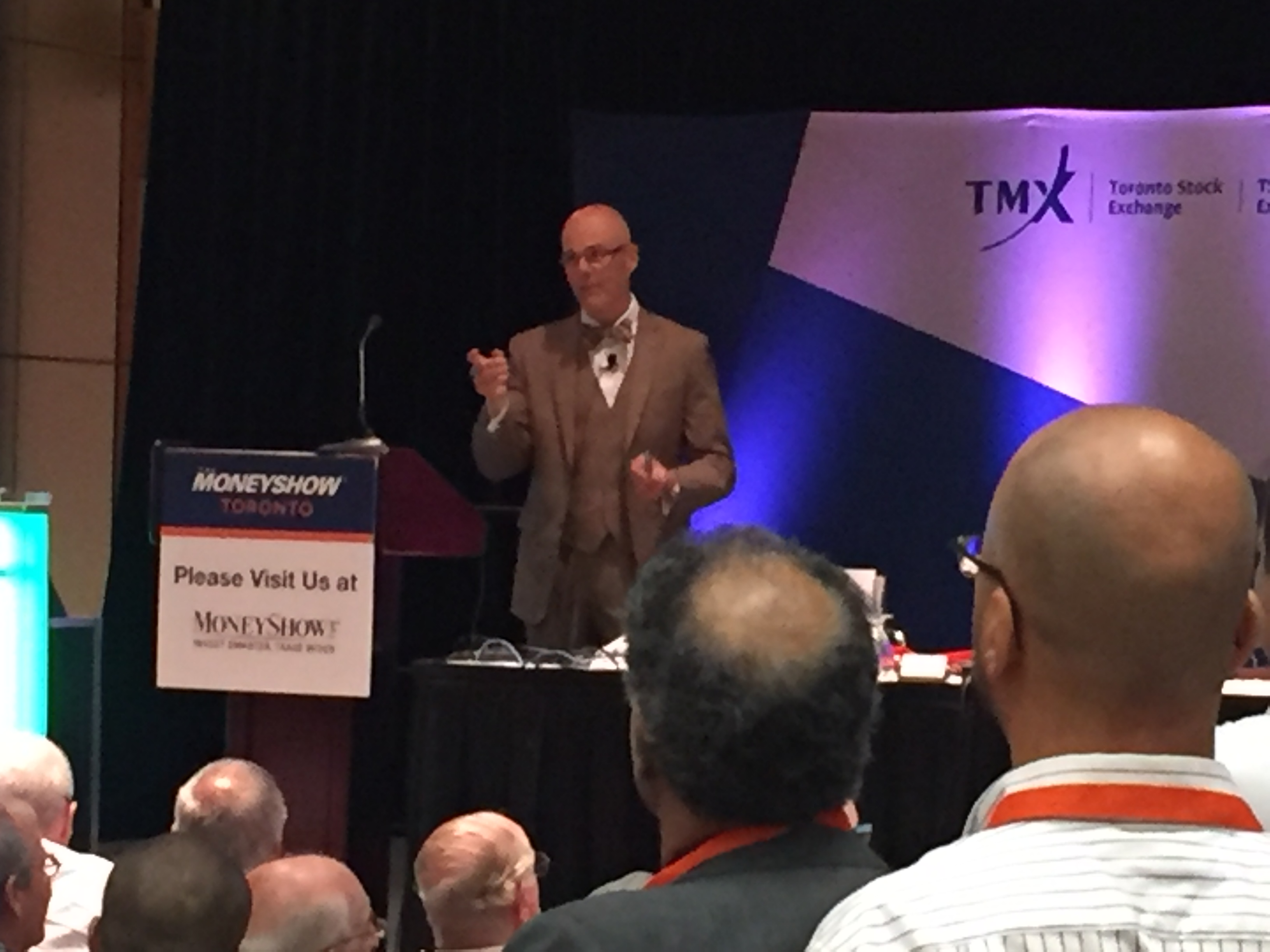