Home / Just another ending of the world

Just another ending of the world

For fun, here is a summary of news headlines from the past couple of weeks as market literally went up, down, up, down in a rhythmic pattern.

Early this week I did a webinar for the Winnipeg CSTA group. Great group –  they are always so engaged. During the webinar I posted the chart below, albeit not so far in lookback period. What I was suggesting is that the market has returned, believe it or not, to “normalcy”. You see, markets without 20% pounders once in a while are unusual. Even during the greatest bull market of all time (the 1982-1999 bull) we had tons of big sloppy corrections. Asian contasion, black Friday, bond scares, Y2K scares (planes were gonna crash outta the sky!) etc. That bull ended in the tech bubble 2001-2 crash. But during that amazing bull run, it had plenty of (pardon my vulgarity here) puke-moments.

Since Trump’s election, the market refused to get sickly. Not until 2018, that is. But even the bigger move of that year (December 2018, where we saw some 25% downside) was way too short in duration. Markets do not normally make v-reversals like that.

I’ve drawn on the chart a few boxes. These represent market corrective periods that occured after bull-trend runs. Note the 2008-9 crash on the left side of the chart. One of the characteristics that distinguished that crash vs. the bull-market corrective boxes that followed was the lower number and smaller magnitude of lower lows. In the bull market “boxes” we can see a few minor lower-lows, but quick (a few weeks to a couple months)  moves back over the 200 day / 40 week SMA. Not so for the 2009 crash (nor for the 2001 crash).

It is my opinion that we have entered into a new sideways box. This one has come sooner than expected. But, there was a lot of excess to work out of the market, and the virus is a pretty good excuse for a period of volatility. The support level of 2850 was tested for the SPX last Friday- with a hammer reversal. Read this blog for more insight on that subject.

I believe that 2850 may be tested again, or, as in 2016 and 2018, briefly taken out. I think the market will gyrate for a while, but it’s not going to be another 2001/2 or another 2008/9. The box may last a year. But it provides trading opportunities. The box is your friend! I’m looking for further buying opportunities in the box.

In the long run…The virus will be cured. Its impact on the economy, although unknown in length and scope, will not be permanent. People will buy stuff again, go back to work, go on planes again, Disney will sell tickets again, we will revisit public swimming pools. Everything is impermanent (thank you to the Buddha for that little reminder). How many times have emotional investors freaked out over events like this, sold at a low, then completely forget their panic a year later. Impermanence + emotional irrationalism = opportunity. 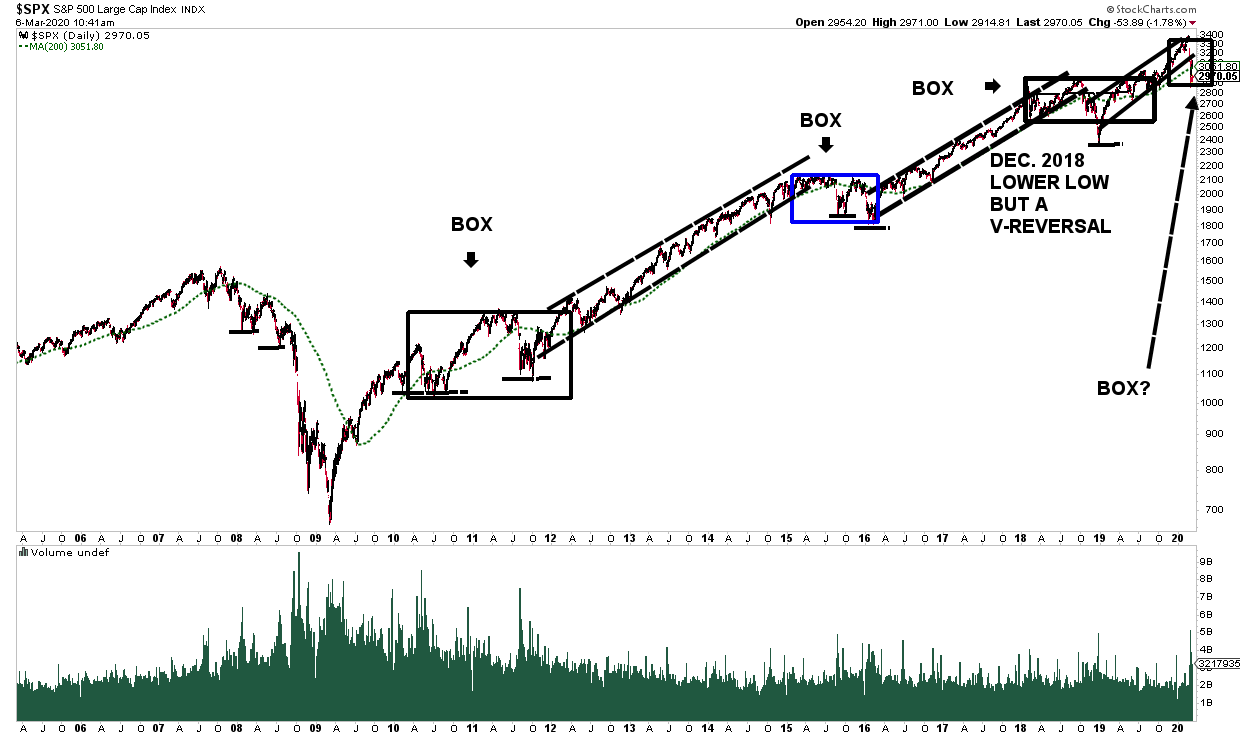 So much for the one – year view. Let’s take a look at some quantitative analysis summaries that I’ve clipped from sentimentrader.com. BTW–I highly recommend that investors consider subscribing to their basic service. Its cheap and invaluable. I have subscribed to their premium service for years. Here are some clips from their regular and premium notes:

“Such extreme anxiety in the markets has only been matched several other times from 1962-present.

When the market saw this many days of extreme selling in the past, it wasn’t a clear short term bullish sign. Sometimes the market fell more over the next few weeks, and sometimes the market bottomed immediately. Predicting exact tops and bottoms is difficult, particularly during periods of market panic. But overall, this was clearly bullish for equities over the next 6-12 months.

The Backtest Engine shows that since 1997, there have been 63 days when Risk Appetite was below 5%. Three months later, the S&P 500 was higher after all 63 of them, averaging 7.8%. Like we’ve seen with many of the other studies, there was often some more wild shorter-term swings, as these didn’t necessarily market the lows. Just very close to them.
Over the next three months, the Dow rose each time, quite a feat given that one of the signals triggered during the midst of the 2008 meltdown. Volatility like we’ve seen has a strong tendency to lead to medium-term recoveries.”

So, there you have it. I’m out of the internet loop until late next week, so Aleks will blog for me on Monday. I’ll respond to comments at the end of next week. Meanwhile, as Bob Marley sang “Don’t worry, be happy. Everything’s gonna be alright”