Home / It’s the end of the world as we know it. And I feel fine.

It’s the end of the world as we know it. And I feel fine.

Rock band REM sang a truly great song called “It’s the end of the world (as we know it)”. Many of you have heard the song, I’m sure, but if you wish to marvel at how lyrist Mike Mills can carry off a fairly rapid flow of complex lyrics – click here.

Today, I’d like to present an argument for the renewal of a highly active, trading orientated approach to investment management. At ValueTrend, we try to “go with the flow” regarding our trading. For the past two years, our trading activities, while still well above average when compared to most Portfolio Managers, was subdued. This was due to the consistency of trend, and lack of volatility on the markets from mid 2016 to early 2018. You trade less in a trending market.

I believe that the longer termed trend that has been in place since the 2009 is still very much intact for the S&P 500. A break of the lows set in February of this year would change that prognosis, but for now, we are still in a bull market – technically speaking. Despite the longer termed trend remaining intact, it is clear that the mid termed trend, which was established in mid-2016, is over. As I noted on this blog, markets pull back 10-12% fairly rhythmically, and often move into sideways consolidation patterns. These sideways periods sometimes last for more than a year. I believe that we have moved into one of these periods at this time. Sideways markets are my favorite environment to trade. They could be for you, too. Let me explain. 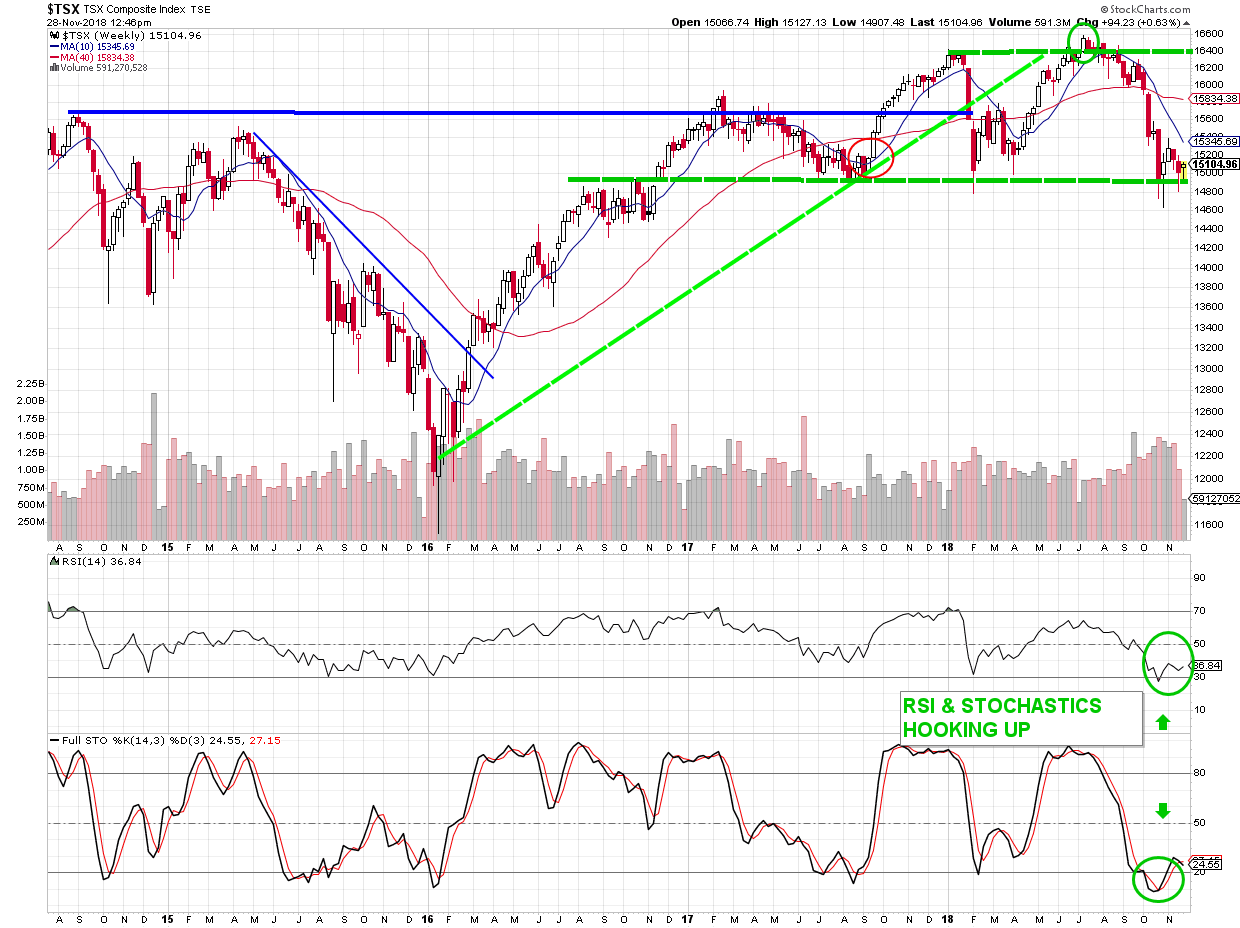 Let’s take a look at the TSX first. It is not in a long termed uptrend. It has, however, held a mid-termed uptrend since 2016. Note that the uptrend that began with the 2016 trough has recently ended. Note the current sideways “box” that encapsulates the movement of the TSX with a certain amount of predictability. Note the floor near 14,900, and the ceiling near 16,400 for this index. Using my trading rules, I look for a bounce off of support (14,900 or thereabouts), a positive follow-through of a few days, and a nice hookup on the key momentum oscillators RSI and stochastics. Bingo—we are nearly there for an entry! We need another couple of positive days and I expect to enter into an index ETF trade for the TSX. With this type of trade, you know your stop price (below 14,900 for 3 + days). You know your target sell price (at or near 16,400). Don’t you just love this trading stuff?!?!

As noted above, the long termed trend is bullish for the S&P500. The mid termed trend that began in 2016 is, however, broken. Like the TSX, the S&P500 attempted to put in a new high (circled on the chart) before failing miserably. This index, like the TSX 300, has been trapped in a box. Support comes in at or below 2600, resistance around 2900. Like the TSX, we are setting up for an entry. You can already guess my strategy: buy after another day or so of confirmation, stop out below the Feb low of 2530, sell for a profit at 2900. Easy-peasy.

To paraphrase REM, It’s the end of the up-trending market, as we’ve known it. And I feel fine! You should too.