Since 2015, its been all about the US stock markets as commodities took it on the chin against the returns of US Info tech and growth stocks. That trend seems to be over this year. Canada has been the better market. But will that continue? I think so. Lets explore why we need to take a serious look at buying Canadian stocks.

Oil is particularly bullish IMO: Please see these two recent blog(s) here & here outlining my argument for energy -which included US restocking of SPR’s, a longer than anticipated Ukraine war, and the realization by dofus liberal governments that their lofty green policies were premature, short sighted, and lacking any mathematical backings of supply/demand realities. The “new” green goals seem now to be for targets into 2050, rather than 2030 that we were hearing just a couple of years ago. Even that sounds pretty lofty. Whatever the case…Oil is going to remain dominant for years to come.

Below is the TSX 60 (courtesy iShares) sector breakdown. Financials are the #1 spot in the index, but the energy sector comes in at 19%. Materials (gold, metals) come in at 10%. All in, the TSX is 29%+ in commodity producers. More good news: the TSX is only about 5% in the Info tech sector – which caused much of the damage in this years rising-rate environment (growth stocks prosper in easy money conditions due to their leverage). The tides have turned, and info-tech, as I predicted would happen for the past 2 years, is in the dog house. 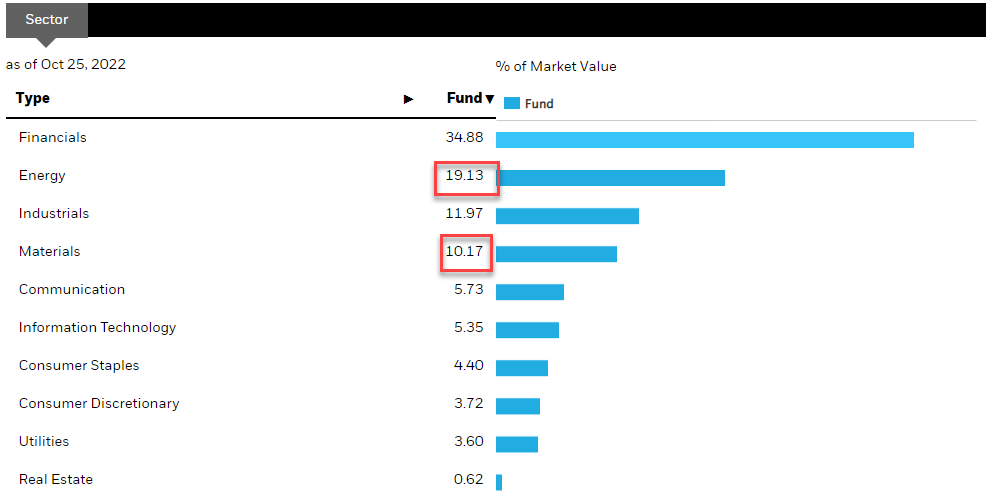 Commodities benefit from a weaker USD: As the Fed pulls back in their uber-hawkish stance (which I have been predicting on this blog would happen), large outperformance will arise in  hard assets on the back of a weaker USD. Please see my video on an argument for a weakening USD/ rising gold going forward.

Of note: as the USD has experienced the first signs of weakness, gold miners are now at 3-week highs. Meanwhile, gold is also taking some of the glory from tech stocks. In August, the Technology (XLK) / GDX Gold Miners ratio (bottom pane of the comparative chart below) put in a top and rolled over. After the recent tech stock disappointments, the ratio is hitting new lows (XLK underperformance). I remain bullish hard assets -including gold as we see a potential rotation of strength from  financial assets. 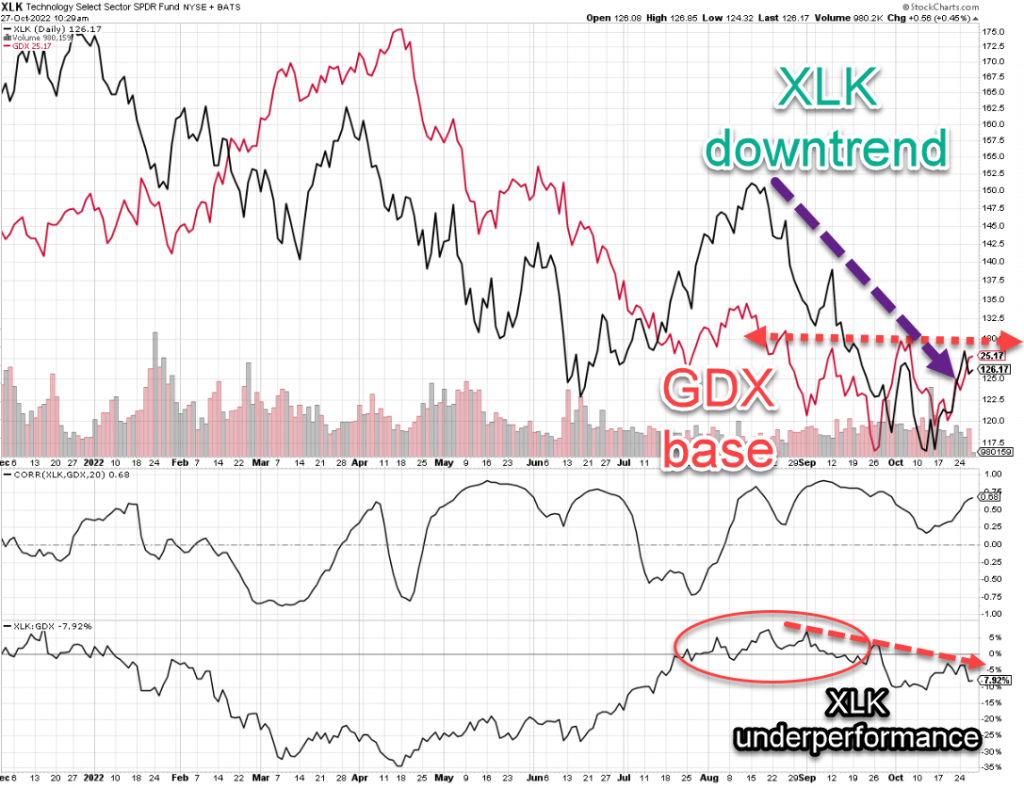 Note on the chart: Gold miners (red line) looks like they are basing. If the Fed raises their long-term inflation target, yet back off in the aggressiveness of their tightening with the pending recession in mind, then the US dollar will decline and hard assets, including gold, will likely rise significantly

TSX will benefit from a less hawkish BOC

So, runaway inflation …. but …. the BOC decided to hike rates by just 50bp instead of the expected 75bp…??

Either the BOC got the tap on the shoulder (slow down) from the Fed… OR…they saw something that scared the poop out of them. Can you say…”Recession”?

Recession is political suicide: It seems that Justin Trudeau can continuously commit ethical atrocities, unwarranted totalitarian exercises in power, and record breaking self serving privilege’s – all with no punishment. In fact, he gets re-elected! However… recession might be enough to scrape some of the Teflon off of  the Prime Minister. No incumbent politician wants to preside over a recession.

What I am suggesting here is this:  Recession trumps inflation when it comes to elections and BOC policies. Evidence of this reality is being seen this week.

Lets take a trip back in time by 2 weeks. Remember this  message delivered by the BOC on October 14th?

“Bank of Canada governor Tiff Macklem emphasized Friday (Oct 14) that he has not changed his mind on interest rate hikes, even as expectations grow about a possible recession next year.” – CTV

90%+ of investors were under the assumption that the Bank of Canada was going to hike 75bps. Remember, Canadian CPI just came in hot across the board on the 19th. Then…we got a lower rate hike…say, what? Result? The market’s expectations of Bank of Canada hikes before the new year just collapsed on Wednesday.

The market went from expecting 75bps this week, followed by another 25bps.

Instead, we got 50bps hike now, and the market is now pricing in only a small chance of any further hiking (near 60% chance of one final 25bps hike)! Chart below, courtesy of Beartraps, shows the falling forward rate expectations. Note – this isn’t a rate chart, it is an expectation chart. 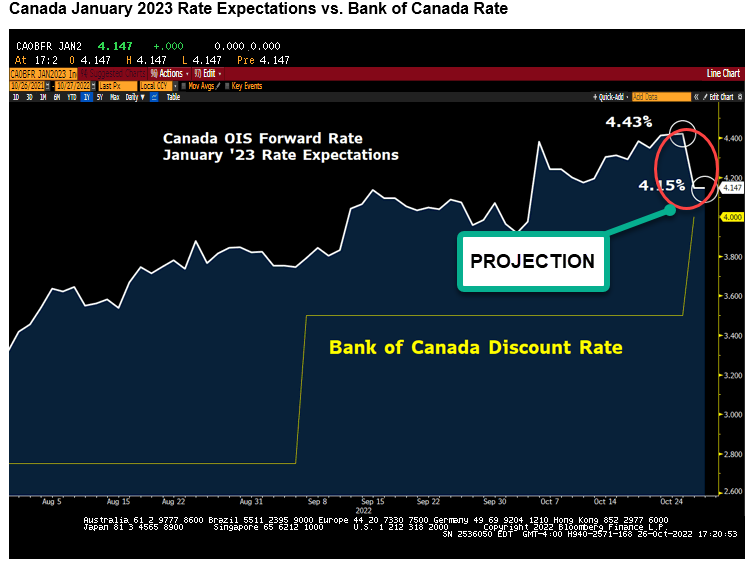 IMPORTANT: What does this change in policy shift towards accepting inflation with a new focus on softening a recession mean? It means that inflation will remain persistently high in Canada!

TSX has a better technical profile than the SPX 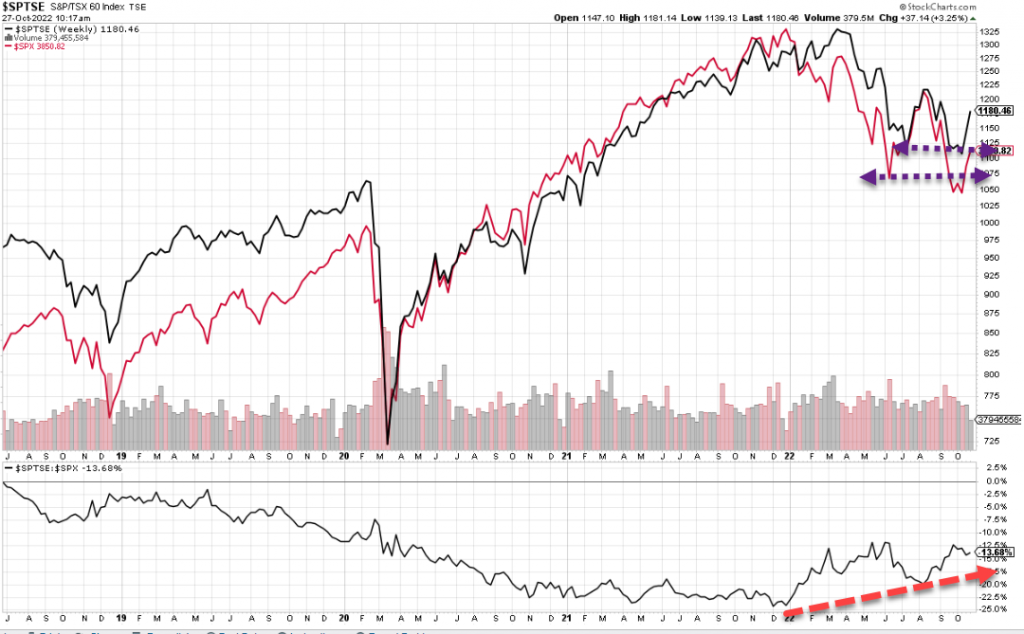 Higher concentration of energy and commodities, lower concentration of growth stocks, a reduction in inflation fighting policies, a potentially softer USD, a heads-up from the gold sector, and finally – a better stock chart for the TSX. It continues to be looking like its Canada’s turn! At least for investors in the Canadian stock market. Perhaps not so much for every one else.