Home / Is yield breaking out?

Is yield breaking out?

Canadian yield plays are trying to break out. While most of these sectors perform best over the summer according to the seasonals, the charts are telling us something different. In fact, many of the yield-orientated sectors and stocks such as utilities, REIT’s and high yield energy stocks underperformed this summer. Right now, their summer downtrends appear to be turning the page- although further evidence is needed to confirm this potential. Let’s take a look at a broad “dividend yield” ETF, run by BMO. The CDN Dividend ETF holds a variety of higher yielding CDN stocks including financials, energy, utilities, etc. You can see by the chart pattern that the spring/summer downtrend ended with a September breakout. Below, I’ll look at a few of the bigger sectors in Canada that tend to attract yield orientated investors. Click on the charts for greater detail.

The BMO Canadian utilities ETF is attempting to break a significant resistance point at around $15.20. I’d like to see a break and at least 3 days follow-up before buying, but moneyflow (top, bottom panels) and comparative relative strength vs. the TSX (third pane from bottom) are improving. 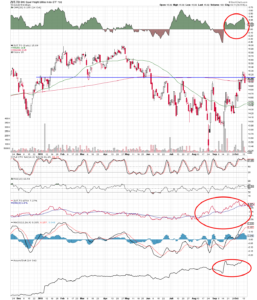 REIT’s
REIT’s are not breaking out yet. Momentum looks encouraging, but moneyflow is pretty lame at this point—at least for the Canadian REIT ETF issued by iShares. I’d want to see the ETF break $15.50 before getting too excited. 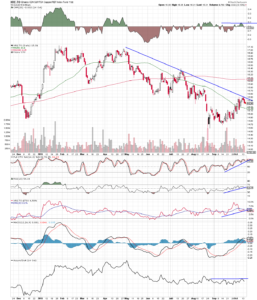 I noted the breakout by the CDN banks here  Canadian insurance stocks, such as Manulife, are basing on growing moneyflow and momentum. It’s a positive development—look for a breakout before committing. 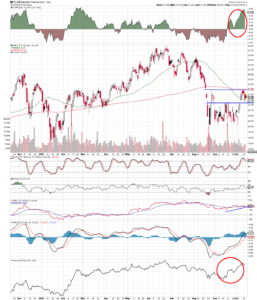 It’s a risky bet, but the market is moving into higher yielding energy stocks right now. Lower yielding stocks like Suncor in the sector are not the big movers. It’s the yield plays that are having all of the upside of late. Crescent Point Energy, probably one of the better known yield plays in that sector (despite the dividend cut a while ago) has recovered some of its losses after a devastating summer. The stock broke its short termed neckline at $17, and is finding resistance at the 2014 energy selloff lows. This is a risky bet – one that I won’t be playing.

Please come out and join me – I really enjoy meeting readers of this blog at my speaking engagements. Here is the link for the details.