Home / Is this the real life, or is this just fantasy?

Is this the real life, or is this just fantasy?

Regular readers know I refer to 1970’s and 1980’s rock lyrics periodically to inspire my blog topics. Today’s blog is brought to you by Queens hit song “Bohemian Rhapsody“. The song begins by asking if this is the real life, or is it just fantasy…

I might ask the same about the stock market. Much ado has been made over the recent triangle breakout on the S&P 500. BTW – argue as you wish about the interpretation of whether this was a symmetrical or right angled triangle breakout. Either could be argued for–it depends on whether you measure the low of January’s low (resulting in a symmetrical triangle) or if you prefer to measure from the close (resulting in a right angled triangle).

As I note in my book Sideways… I really don’t get tied up in the “Name that formation” game. All that matters is that the market was consolidating after an over-extended bull market. Consolidations are identified by a lack of fresh higher highs and higher lows. How that image projects on the chart is of less importance than the fact we are not on trend.

It is encouraging to see the recent breakout of the triangle. Officially, the week ended with two days through the trendline–regular readers, and those who have read my books will know that I like three days or more before getting too excited. So if we see the S&P 500 stay over the trendline today (Monday) it will be encouraging. This would imply that we have a higher high than the last peak and a market that has maintained its position above the 200 day SMA.

Bear in mind that the trend channel recently broke – as seen on the lower chart – although we may be re-entering it. This implies that a new bull run may proceed at a different angle – probably less steep than that of 2017. The break is not outright bearish for the market, but it does imply that something has changed. I return to my much-stated suggestion that we should beware any break of the January low of 2580 AND a crack of the 200 day SMA before declaring a bearish turn. Meanwhile, stochastics shows a mildly overbought situation, and moneyflow (bottom pane) is losing steam. But all else checks out positively on the indicators I watch. 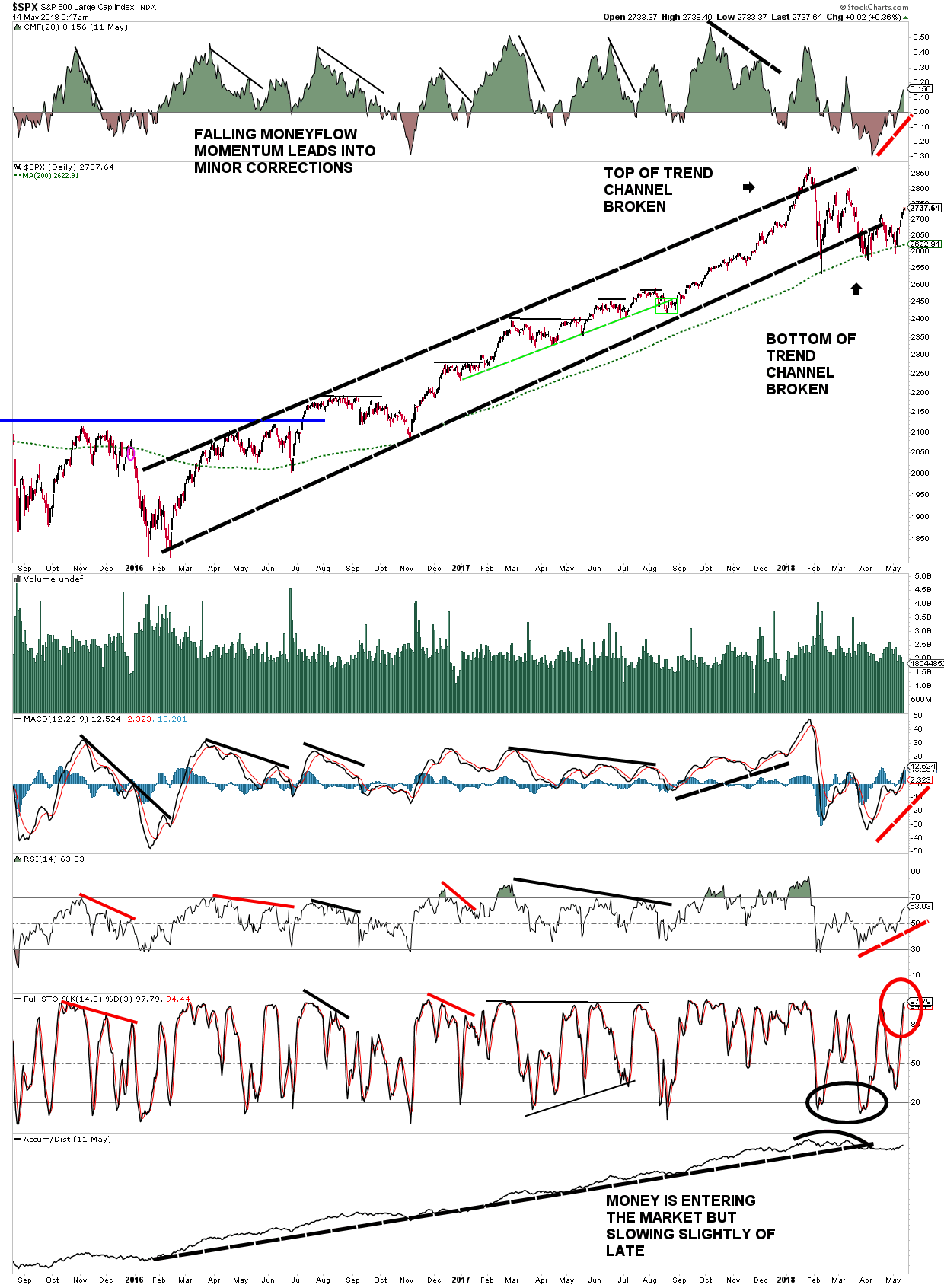 I noted that my “Bear-o-meter” went into mildly bearish territory at “2” out of a potential of “8”, where 8 is most bullish, and 0 is most bearish.

At ValueTrend, we recently added a scaling methodology to our Bear-o-meter readings that dictate the potential range of cash to be held in our Equity Platform. This scale dictates that a minimum level of 20% cash should be held upon a reading of 2. So that is where we sit right now.

The recent breakout of the triangular consolidation is encouraging. But nothing has changed as far as my market risk assessment. The weekly chart (not shown) shows that the primary trend remains intact. But the various sentiment, breadth, momentum etc ratings seen on the Bear-o-meter reading (again, refer to that blog) remain largely neutral. This implies a market that could be subject to a reversal should an unappealing bit of news appear in the media. In the mean time, the trend is your friend until its end.

The market remains in a less attractive risk/reward state, but its primary trend is bullish. As such, we expect to maintain our 20% cash weightings – without adding or subtracting to our net equity exposure (trade swaps aside) in the nearterm.