The latest fad seems to be a remake of the ethical fund concept of the mid-late 1990’s. The new ones are called ESG funds. This stands for environmental, social & governance. I recall examining the makeup of the ethical funds in the 1990’s. I was amused at the time to note that one of the funds held the broad TSX index. I also questioned the determination of what is ethical. I still do. As in…who is the authority on ethics? What gives the managers of the fund the moral authority to say any of these businesses are ethical? Come to think of it…Is their fund business ethical?  Is a liquor company ethical? Is marijuana? Tobacco? Is driving any car ethical….shouldn’t we all take transit?

Is eating animal products ethical? Some people say no.  Is buying anything made in China, given their human rights issues, ethical? Planet Fitness’s  says no grunting and clanking weights and rings an alarm if you do – is it non-inclusive to others to grunt when working out?  Is shorting a stock unethical? How about short termed or day trading?  Higher density housing would solve population problems – is it unethical to live in a detached house? Are pesticides and weed control unethical? Have you switched to drinking, uh, water bottles out of, uh, water out of, uh, when we have water bottles, uh, out of plastic, uh, sorry, away from plastic towards, uh, paper, um, like drink box water bottles sort of things?

Are atheists, gays, and abortion doctors unethical? At one time in history – all members of these groups have been thought as unethical, and even punishable by death! Thankfully, this has changed.

Tesla is currently clearing forest to build a new plant. Is this ethical? Is wearing blackface like our PM did unethical, or was it just ok in 2001?

The recent ESG fad has been marketed heavily by Blackrock. We ran across an investor who told me he didn’t like the idea of owning oil stocks. He wanted to avoid fossil fuel investments. He wanted to buy into Blackrock ESG funds. Are oil companies not ethical? Fossil fuel was evil in this person’s mind. However, I am sure that he, like all of us, is surrounded by oil products. A battery powered car has tires that are disposed of every few years. Thanks to the million year old dead things in the ground,  I don’t drive to work on Fred Flintstone’s cement tires. Synthetic rubbers are typically produced using polymers found in crude oil.

So are the plastic parts in a so-called ethical car derived from petrochemicals.

As I look around my office, I see plastic stuff everywhere.

The FlexShares ESG fund (ESGG) holds 5% in energy stocks. On a recent report, it held 2% in XOM. You know, the guys who spilled a zillion gallons of oil into the ocean in 2010? Oops.

It also holds 5.5% in Amazon – the company that supposedly works its employees too hard.

The chart below illustrates via the relative strength to the SPX (circled) that the fund has been in line with the US market. This is an international fund, but it’s a comparison worthy of considering. It goes up, and down with the SPX. 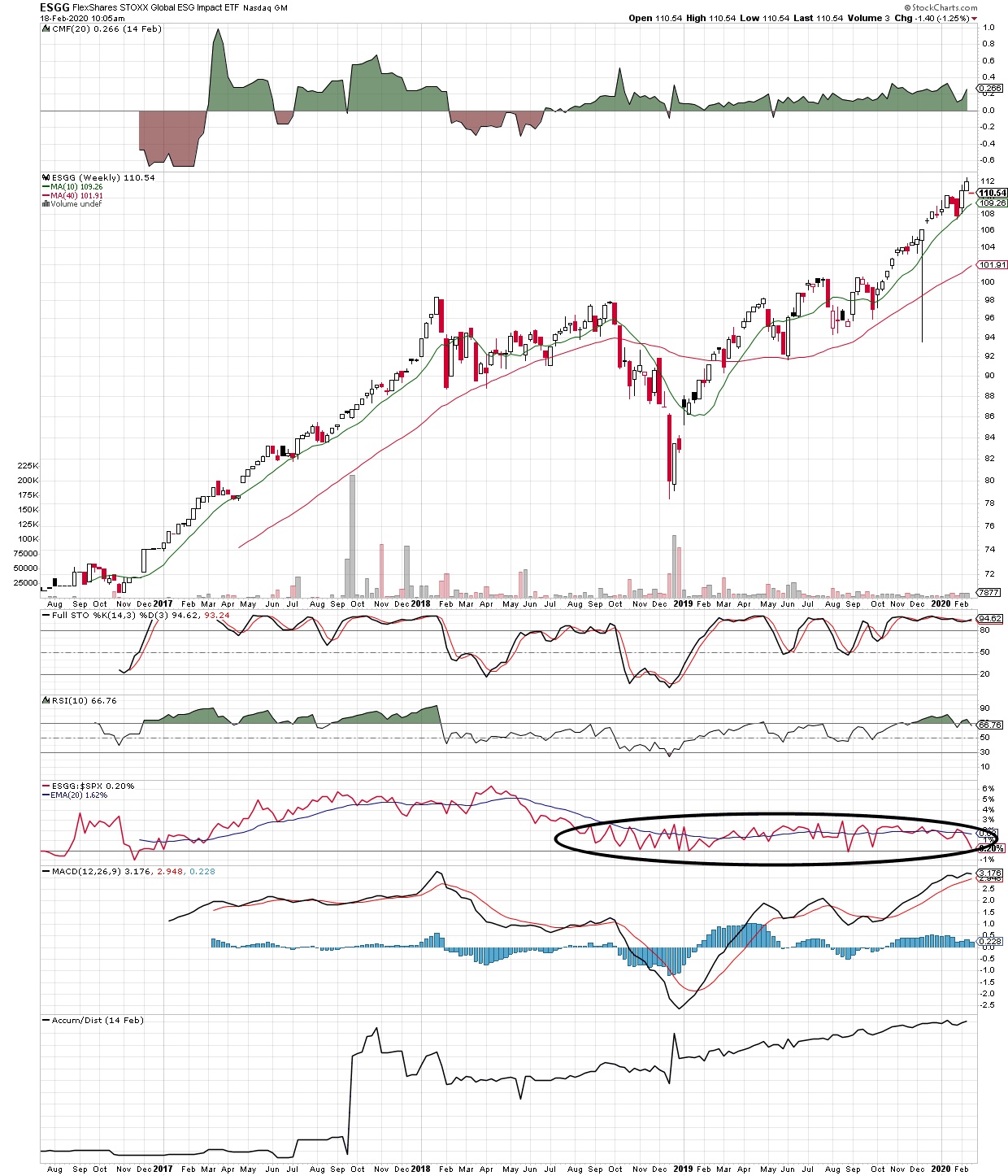 Blackrock’s own SUSA USA fund holds 2.6% in energy. Does that make my formerly mentioned investor evil if he buys the fund…by helping support an oil company? Canadian oil has been argued to be ethical….. and not ethical. Its arguable on each of those sides.

SUSA also holds Google, who have pledged “not to be evil”, yet have run across accusations of questionable tax policies. Despite the likelihood that Google is amongst the most ethical companies out there –  It’s hard to quantify.  SUSA also holds Apple and Microsoft. Apple has been accused many times of using “sweatshop labor”, . Does that make SUSA a fraud? Or again, are we back to an opinion by a fund manager as to what is ethical…? Microsoft (which we hold in our VT Equity Platform)  made use of its powerful position to force some of the computer makers and suppliers to sign contract to assist its pushing aside activities of Netscape in the market – eliminating competition.

All of these examples are ethics- debatable. The fact that each of these issues will polarize many of my readers tells us that nobody has the moral authority to determine what a truly ethical fund should hold. My stance is that ESG is a marketing ploy, and little else.

Back to the SUSA fund.  It’s done a bit better or worse than the broad markets. For 2017-2018 it went sideways with the SPX. Now it’s outperforming. Relative strength is circled on the chart. You’re not making or losing much more over the market by owning the fund. If the market falls, so will you – note the identical corrections in December 2018, etc. 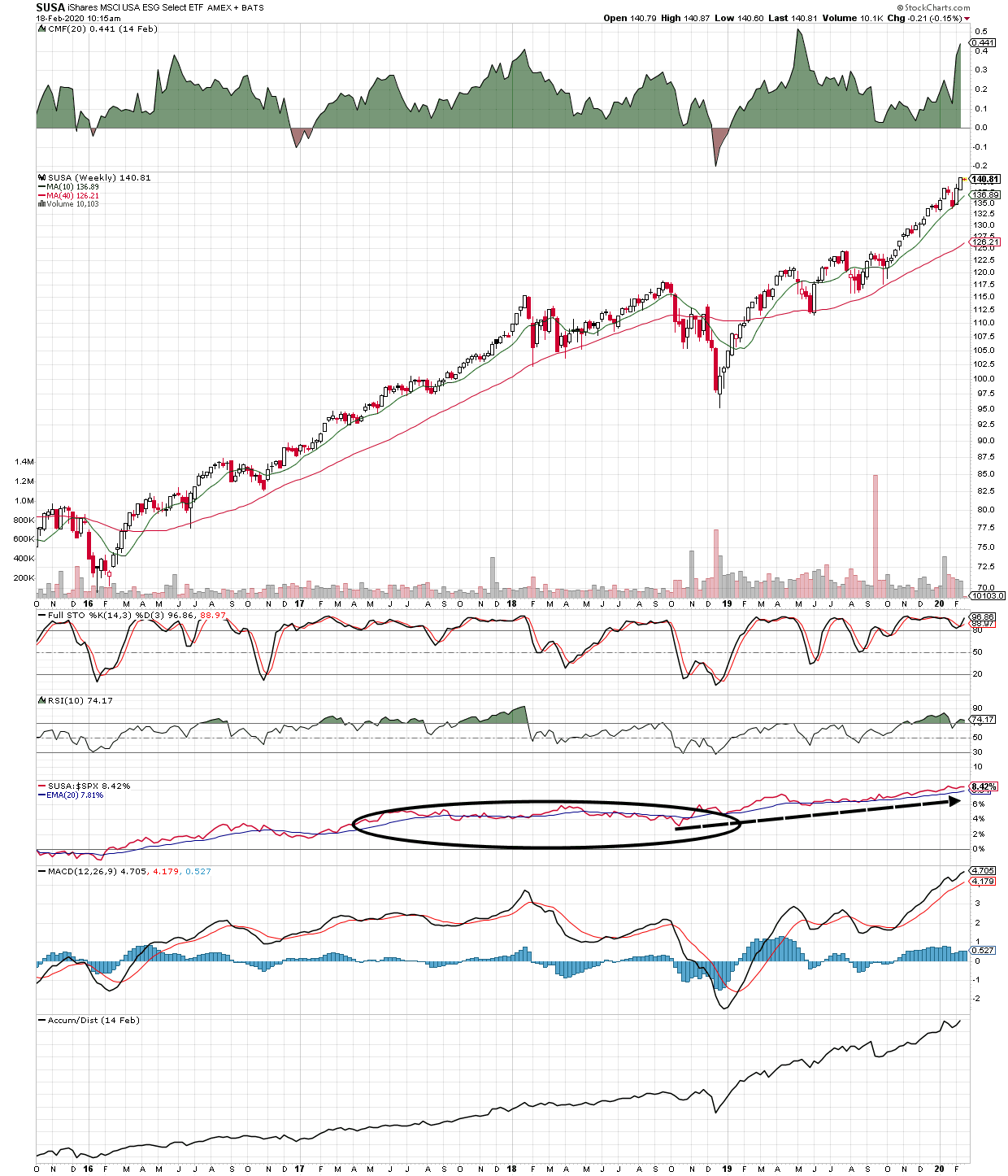 I believe in investing by the potential of the stock. By default, you will likely end up owning some stocks that these ESG funds classify (rightly or wrongly) as “ethical”. For example, we hold MSFT, as noted above. We also hold ENB-T and JNJ, which are held in a couple of other Blackrock ESG funds. We bought these stocks to make money, not to feel warm and fuzzy. Asking someone else to judge what is and is not ethical, and then placing your faith in their analysis to determine morality and investment worthiness, is a bit of a stretch.

For this reason, I say buy based on risk and reward potential. The rest is debatable.