The basis of sentiment studies is that when too many investors – particularly retail investors – are bullish, its a contrary signal suggesting things are overbought/ due for an eventual pullback of some sort. Conversely, when too many investors are bearish, its a contrary signal suggesting the market has sold off too much from pessimism, and the market is likely to rally.

I follow a number of sentiment indicators, and they are assigned weightings to calculate my Bear-o-meter compilation. That compilation is a reasonably good indicator of the risk/reward tradeoff on the US broad large capped stock market. Its especially valuable when the indicator reads at one of the extreme ends of its spectrum – unlike the reading I got 2 weeks ago, which was neutral.

I only measure the Bear-o-meter once a month – typically in the first week of the new month. But in between those readings, I still keep an eye on sentiment indicators that are used within the Bear-o-meter. These indicators are – Put/call ratio, VIX, and Smart/Dumb money.

Were you to draw a linear regression line on the above chart, you would find that the put/call ratio tends to average a little under the 1:1 ratio of put volume vs. calls. That makes sense. Most of the time, markets go up. Option traders and hedgers tend to bet in the positive direction favoring calls. Early this month when I read this level for incorporation into the bear-o-meter, the reading was closer to 1:1 – a normal level. I’ve found that a move below 0.75:1 indicates that option traders are too complacent. They are buying considerably less puts – meaning they are skewed towards markets continuing higher even after a strong market return. They’re usually wrong at the extremes. The current level of 0.71 suggests a strong bullish bias, or high complacency. Why hedge with puts when the market shows no signs of abating? Like I said, these traders are usually wrong at extremes, and that’s where they are right now.

The VIX is another indicator using options to read sentiment. But instead of trading volume, it measures option premiums. Options are priced according the their time value (how much time is left on the option before expiry) and the volatility that investors anticipate within that time period to expiry. This “implied volatility” is really where the meat of option pricing lies. That variable changes rapidly as investors become more or less bullish/fearful of the outlook for the market or individual stock. Thats why the VIX is sometimes called the “fear index”. Although the VIX will also include the optimism premium built into calls during a bullish market, the bigger moves in premium will come from the shrinkage of that implied volatility in calls and the surges in put premiums when traders become pessimistic.

The VIX chart is not in “complacent” territory by my definition. But there is no doubt its direction indicates more and more comfort with the market valuations of late. Still, its a neutral reading at the end of the day. 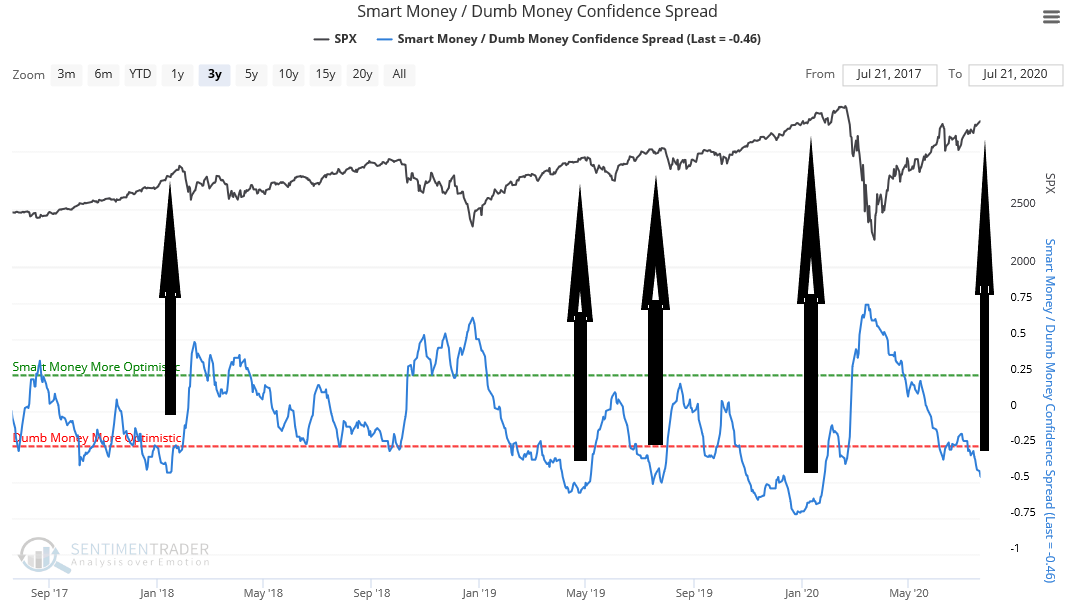 This one gets me into trouble sometimes, but facts is facts. Some investors make better decisions as a group than others. For example, institutional investors and commercial hedgers are on average more “correct” in their market outlook than are retail mutual fund, ETF investors and stock traders. The value of the smart/dumb indicator is that it pits these two groups and looks for extreme divergences in opinions. It stands to reason that often both “smarties” and “dummies” will be on the same side of the coin. It’s when you see a drastic polarization of opinion/outlook that we should take heed. Sentimentrader.com follows trading volume and fund flow of these groups and has created a chart that I find amazingly accurate at extremes.

When the ratio of smart/dumb optimism falls below -0.25, we start to get into irrational exuberance territory. Right now that ratio sits at -0.5, meaning that dumb money is about twice as enthusiastic about the market outlook as is smart money. Note on the chart above that this condition could last a few months, and could even get deeper into the “bullish dummy” territory. But it basically never stays this skewed forever.  This is a bearish sign.

It may take a week, a month, or a quarter. But sentiment of the wrong people has become a bit too optimistic . Keep an eye on the charts for any sign of rolling over.

BEFORE THE WEEKEND I’LL BE POSTING A BLOG ON SOME PREDICTIONS FOR THE CANADIAN INVESTMENT AND ECONOMIC ENVIRONMENT.  MY CALLS FOR A FALLING LOONIE AND UNDER-PERFORMING STOCK MARKET OVER THE PAST 6 YEARS HAVE SADLY, BEEN RIGHT – READ MY PAST BLOGS IF YOU NEED PROOF OF THOSE CALLS. MY OUTLOOK HASN’T CHANGED. IN FACT ITS GROWING MORE PESSIMISTIC.  IN THE NEXT BLOG, I’LL BE COVERING WHY I’VE BECOME EVEN MORE PESSIMISTIC. I PIN MUCH OF THE BLAME ON THE CURRENT FEDERAL GOVERNMENT, WHICH I DID FORESEE AS THE PROBLEM AS FAR BACK AS LATE 2015. TRUDEAU FANS WILL NOT LIKE THIS BLOG, SO IF YOU ARE ONE OF THEM, DON’T TUNE IN THIS FRIDAY. I WON’T RESPOND TO ARGUMENTATIVE COMMENTS, NOR WILL I POST THEM.

HAVING SAID THAT, THE BLOG WILL COVER SOME PRACTICAL INVESTMENT (AND OTHER) OPTIONS THAT INVESTORS WHO AGREE WITH MY PROGNOSIS WILL, HOPEFULLY, FIND POTENTIALLY PROFITABLE AND USEFUL. SO, ITS NOT JUST A WHINE AND COMPLAIN BLOG -THERE WILL BE PLENTY OF PRACTICAL STRATEGIES TO PROFIT AND IMPROVE.

I’m on vacation next week, back with more blogs in August. Feel free to post comments to this blog below. I’ll be around this week to answer them.