Regular readers of this blog will be familiar with my “Bear-o-meter” risk/reward compilation. Briefly, the Bear-o-meter is a compilation of some trend, breadth, sentiment and momentum indicators. They examine the S&P 500 from a longer termed risk/reward perspective. While the compilation’s readings can often signal market changes, it’s not really meant to be so much of a timing tool. It is more to understand the relative risk vs. relative reward we assume when investing at a given time.

Just because the compilation suggests high risk, doesn’t mean the market is about to crash. For example, the Bear-o-meter read a very high risk condition in May 2017.

The market continued on a rampage and went parabolic in the second half of 2017. Eventually, the risk was realized.  In January of this year we got a 10% correction, but it took a while for that to materialize. Nine months later, the S&P 500 is still struggling to break its January high of just over 2900.  By moving sideways, the market is now paying the price for the risk it failed to materialize in 2017. This has happened before. Here is a chart of the S&P 500  that illustrates how low volatility or parabolic moves are basically always followed by a sideways choppy period (as this year), or a market crash. Black arrows indicate low volatility/or parabolic market conditions. Excess corrects itself. 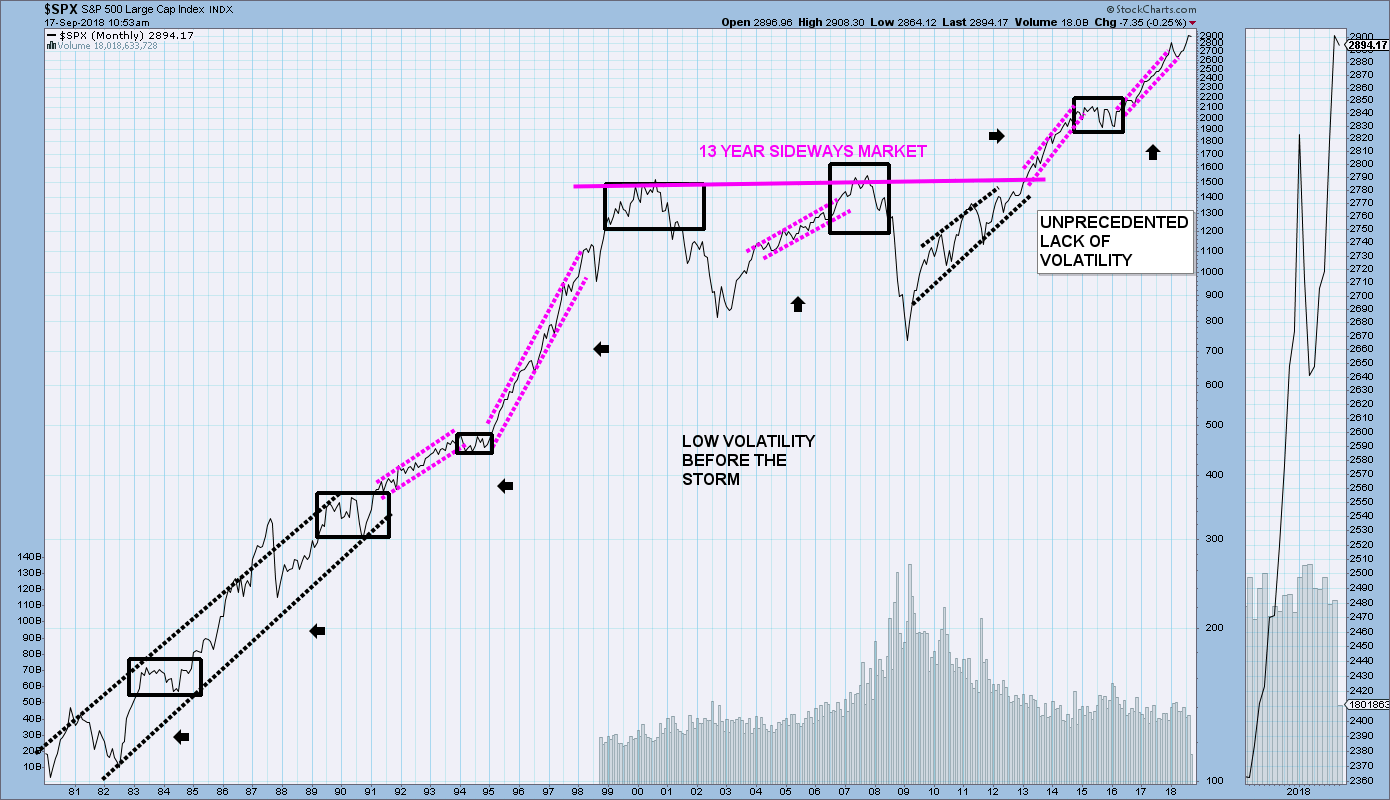 The Bear-o-meter remained neutral for most of this summer.

Interestingly, it recently moved to the top end of neutral. As you can see on the diagram below, the level of “5” indicates a reading that is just below the “lower risk” zone. Interesting, indeed, when we consider the time of the year. September is, statistically speaking, the most probable month for a market correction. So “whaz-up” with that??? 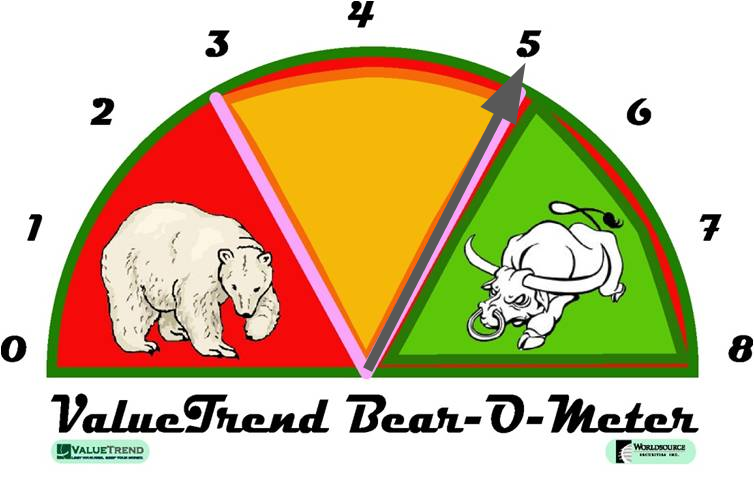 Well, recall that the Bear-o-meter is a probability study—not a timing tool. All we know from its current reading is that – despite the probable or possible likelihood of a correction in the coming weeks, it is not likely to be a dire one. Backed by this is the Short Termed timing model, seen below. It signalled the overbought conditions earlier this month, and the market politely followed through with a small correction. But right now, the signal is not there. Thus, I am inclined to believe that markets may remain sideways, or drift down in the coming weeks. I don’t see a significant markdown just yet – possibly just weakness or sideways action. But that can change. I’ll report any change in probabilities on this blog as/if/when they happen.

It has its own challenges in parabolic market conditions such as late 2017. My short termed system relies on overbought or oversold momentum indicators (RSI, stochastics), along with standard deviation (via Bollinger Bands) to spot conditions that are ripe for reversal. When markets go nuts, as they did late last year, things remain overbought for a long time –sending these momentum and statistical bands into their respective overbought levels for extended periods. Note all of the vertical red bars, indicating “sell”, during late 2017. But, I want to note that conditions like last year are pretty rare. In other words –most of the time we can catch a trade with short termed timing tools like I use on that study. 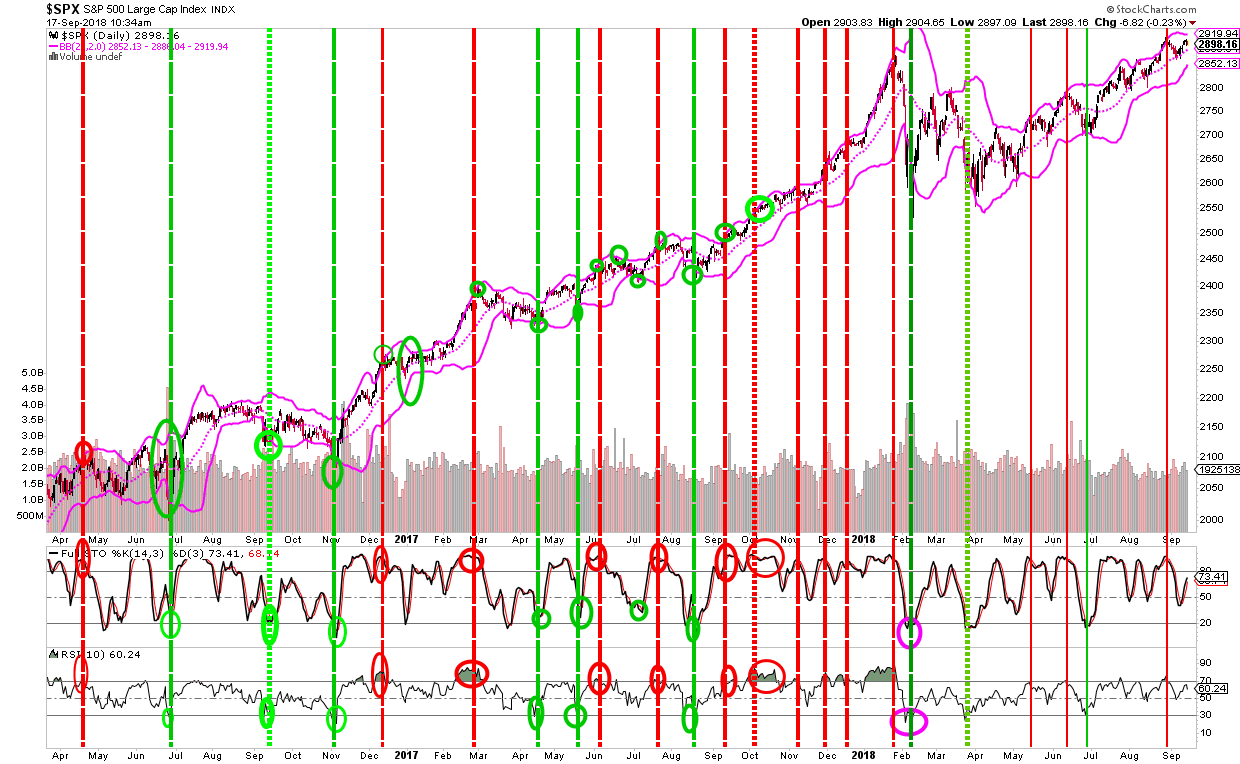 For now, I remain neutral. I hold about 20% cash in the ValueTrend Equity Platform. That’s enough to dampen volatility a bit, and provide capital to invest should the market live up to its statistical averages over the next few weeks.