I was going over my collection of saved charts last night, and found a few that may be of interest to readers of this blog. Here’s some thoughts on what might be in store for three of the better followed commodities, along with the CDN $:

CDN $: A giant triangle, which I have mentioned in past blogs, has been broken to the downside. The traditional way of measuring a triangle breakout target is by measuring the wide part of the triangle, which represents the maximum amount of recent volatility – and project that volatility forward. Thus, the former peak and low point at the left side of this triangle (1.05 – 0.95) is about ten cents. So our 0.98 breakout point should target 0.88. I feel that support at 0.92 will come in first, so thats my expected target. Either way, stay long the USD vs. the CDN $ for now.

Copper: A downside target for this triangle breakout would be about $2.80, using the same logic that was applied to the CDN $ above. Short termed trend is somewhat bullish, but not likely to last.

Gold: After a pretty nasty decline, gold may be trying to put in a bottom here–its made two lows at or above 1325. A double bottom formation will be confirmed ONLY if it breaks out past 1475. If, and only if, that happens, targets will be 1550 and 1625. Silver (not shown) doesn’t look as good, given its lower lows of late. 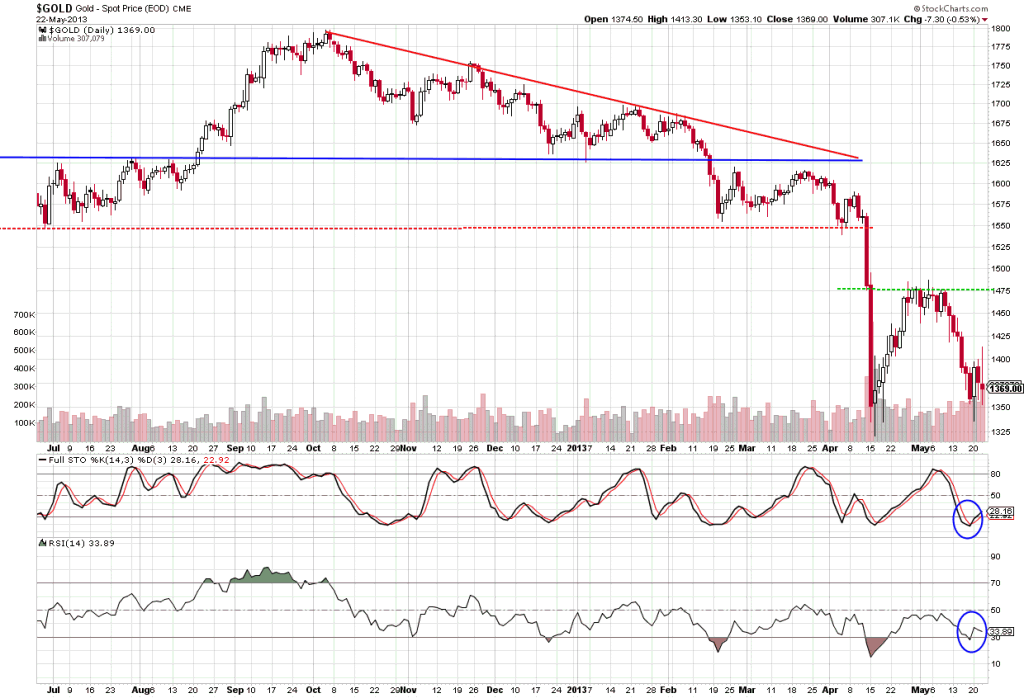 Oil: The endless symmetrical triangle continues for oil. While some of the energy stocks – not shown – may be trying to put in a bottom here (too early to be too optimistic yet), the price of a barrel of crude needs to break out through the high 90’s to suggest a bull market. A breakdown through the high 80’s would suggest a bear.