The S&P 500 is at an inflection point. It sits right below the 200 day (40 week) simple moving average (SMA). It is testing a resistance point (2950-ish) that has failed recently. Will it break? Its important that we acknowledge both the case for a breakout, and the case against it. An open mind is the best approach. With that in mind, lets consider a couple of arguments from each side.

The kinds of overbought extremes in sentiment we saw in the final part of 2019 and early this year typically take months to wear away.   March’s selloff certainly went a long way toward getting there, and perhaps shortened the timeframe for a return to a bull market. The sharp decline into March 23 in the context of coming off an all-time high, followed by an equally sharp rebound in April leads to a reasonable case for a return to the bull market.

After stocks bottomed on the 23rd, they enjoyed a huge rally, and retraced a larger amount of the decline than a head-fake rally tends to. Shorter-term, there have been some sentiment warning signs popping up (as discussed int he bear case below), but the price pattern might be indicative that the might just crack to the upside through the 200 day SMA.

And then there’s the Fed.

The Fed’s ability to move the market is well known. The narrow breadth (discussed under the bear case, below) while markets rise is the result of an unlimited amount of money chasing the same stocks. The Federal Reserve has noted the possibility of buying stocks. In an election year where Trump wants the market higher, that option is most certainly possible.

Its possible that fundamentals no longer matter. Many investors comment that the market is behaving as if it is disconnected from the economy. The bearish case makes arguments toward lower prices.  Presumably, this bearish case would be correct if it was a free market. But printed money and the threat by the Fed to buy stocks has changed the rules.

Also, there is the cash on the sidelines. That money will eventually commit to stocks (Fear Of Missing Out/ FOMO). Chart below courtesy Fidelity. 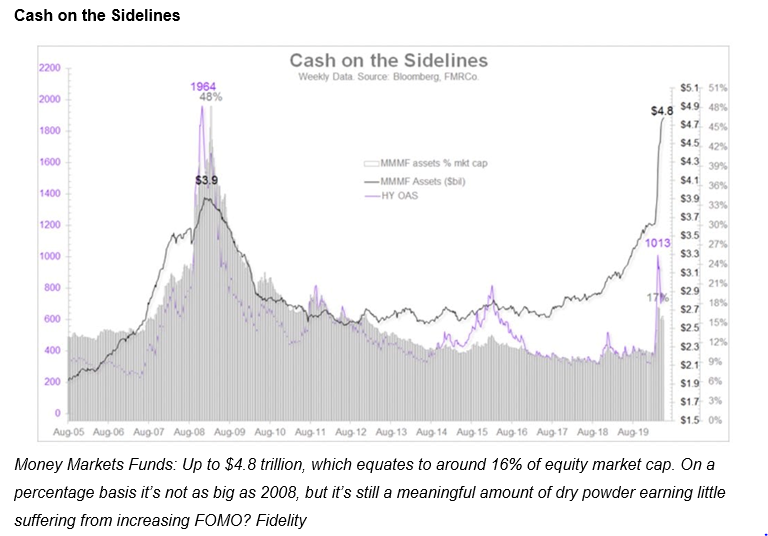 This has been a very narrow rally. Very few stocks are above their 200 day SMA’s. Almost every breadth indicator I look at, while not as brutally low as they were in March, still remain at very subdued levels. Market participation is very narrow, and that has not been a good sign historically. Note how the cumulative Advance Decline line has remained relatively flat (red box) during the period where the SPX rallied back by about 2/3rd off of its lows. The SPX is the black line below the AD line.

Sentimentrader.com notes that narrow breadth rallies have historically proved to be false rallies, with the S&P losing ground over the next few months after each one. The risk/reward was horrid when too many stocks that make up the SPX index remain below their 200 day SMA’s – as we have now….According to Sentimentrader: “At only 24% of stock over their 200 day SMA’s, the current weighting of the top 5 isn’t as egregious as the worst time periods (like February 2001’s weight of a whopping 85%) but it’s definitely in the top tier.”

I will note that since they wrote that report, the indicator has moved to 33% of stocks over their 200 day SMA’s. An improvement, to be sure, but nothing to bet the farm against.

Currently the Bear-o-meter is firmly in the cautious zone. That reading is largely because of the poor breadth statistics, and the change in seasonality.

But, as noted in the bull case, there  is that Fed stimulus. Larry McDonald of Beartraps recently noted his thoughts on the Fed stimulus:

“As investors learned in February, the fundamental problem in chasing equity rallies in the name of “don’t fight the Fed” roulette, is the stakes are so high, the downside risk is magnified when true fundamentals are so far below our feet. When tail risk arrives, the investor’s attention moves away from the perception of central bank support.

Right now, most of the Fed’s firepower is just a gun on the table for everyone to see. Sure, it’s a BIG gun, but they haven’t used most of its bullets, they’re still sitting in the chamber. We suspect the Fed will NOT use their dry powder until stocks are much lower, credit risk much higher.”

As I noted in a prior blog: Better to regret missing some of the gains than regret taking all of the losses, in my way of thinking.