“Don’t fight the Fed” is a cardinal rule to be aware of when investing in the stock market. The Fed (and the BOC) responds to inflation and growth in the economy by using monetary and fiscal policies to keep these two key measurements balanced. Right now, the Fed is dealing with high inflation.  Monetary tightening has been the tool used by the Fed to reduce it. Investors are fixated on what the Fed’s next move will be. CPI reports are eyed bullishly if there are signs of inflation easing, or bearishly if inflation seems persistent.

This week’s headline CPI coming from the USA may comfort the bulls. That means less tightening, they believe – and that’s bullish for stocks.  But Sticky CPI (food, rent, wages) should comfort the bears . This CPI reading might be a little like weight loss. When you diet, the first 10lbs come off fast. But the last 10 take 5 times as long! Reducing CPI may take longer than the stock market anticipates

“2/3rds of consumers living paycheck-to-paycheck. This isn’t a great situation for an economy led by consumption.”- BearTraps 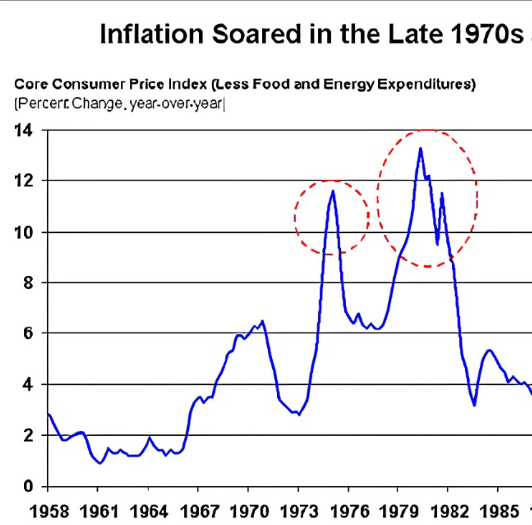 As we can see in the chart above, inflation started in the same range that we’ve just been through (aka 2% or less). Through the 1960’s, it rose into the 6% range. A brief decline, and inactivity by the Fed to taper inflation through monetary tightening, a massive spike was seen by 1975 at 12%. Here’s the clincher: after coming down to 6% in 1976, CPI rose to almost 14% by 1980!

This is a mistake the Fed wants to avoid at all costs. They will keep rates tight until inflation is beat. That – as I have been hammering on for 2 years now – will push us into recession.

Door #1: Stock investors are assuming that inflation is declining and the Fed won’t raise much longer or deeper. Then, the economy will enter a mild recession in 2023. This will bring about disinflation and the Fed/BOC, with perfect timing, will flatten then ease rates and thus avoid deflation, or stagflation. This scenario seems very unlikely given the track record, and cold hard reality. Still, it seems to be priced into the market.

Door #2: If the economy enters a more severe, full-blown recession, the Fed will be forced to pivot too soon, which, like in the 1970s, could cause a short drop in inflation, and then be followed by even worse inflation in the future and perhaps an even worse recession.

Door # 3:  The economy could ward off a recession in the near-term. This means inflation could persist a bit longer. This would mean the Fed does not pivot yet. Remember, the market assumes Door #1….The market has priced in a pivot coming soon. So…No pivot in monetary policy would be bearish for the markets, since such a pivot is already priced in.

Conclusion: The Fed (and BOC) are between a rock and a hard place. If they open either doors #1 & 2 – aka they pivot (loosen), it will likely spark another bout of inflation like in the 1970s. If they open door # 3 – aka if they delay the pivot, it will disappoint markets and likely force a final “Wave 3” selloff in the coming months. That’s my bet. I discussed this potential in my “Go Johnny Go” blog—I urge you to read that blog if you haven’t.  Review it if you have already read it. One way or another, the excesses of the past must be corrected, and a 20% one-and-done, fairly calm investor selloff (aka 2022) seems too little, based on historical bear markets.

I believe the market is ignoring the Fed’s conundrum. Once it realizes a pivot isn’t imminent, it will sell off.

I have noted in past blogs that one of the research services ValueTrend has access to is a political investment analysis service (ACG Analytics). Basically, they look at alternative data – that is, worldwide moves by politicians that can affect stocks, commodities, bonds, currencies. Its really been quite insightful. For example – in helping us to identify opportunities in energy in 2020. Back then: extreme ignorance/stupidity prevailed when leftist governments were capping energy production – with no planning or foresight beyond their political idealism and swaying financially unaware young voters.  This, right on the cusp of COVID reopening demand. The setup was there for a pop in oil. Coupled with a base breakout on the chart, it was a fantastic trade, which we exited (mostly) in early 2022.

Recently, I noted in this blog that ACG has speculated on a potential move of heightening aggression by Russia against Ukraine in February. Well, here we (may) go:

What does this mean?
-Surge in Russian Navy and Submarines in the Black Sea
-Suggests a new era in the conflict might be about to start

Another factor that may trigger a move in energy prices:

We see the upcoming round of sanctions on Russia as a catalyst for refined product prices such as gasoline and diesel. EU is planning to cap the price of Russian refined products starting Feb 5. Based on Russia’s comments and actions to the December price cap on their crude, we can expect that Russia will severely limit the export of refined products to the EU once the cap is in place. This means that Europe will need to get the more refined product from elsewhere, most likely the US. -BearTraps

IMPORTANT: Watch for markets rolling over as the current rally matures… the final Wave down (washout) may be approaching