Home / Ignore this signal at your own peril

Ignore this signal at your own peril

Its getting dangerous out there, folks. The two charts shown today are courtesy of www.sentimentrader.com – who offer the best sentiment studies available on the internet. The first chart, below, shows us the confidence by “Smart traders” (institutions, commercial hedgers, insiders, large speculators). These guys, noted by the blue line on the chart, are usually right when it comes to market timing. The red line on this same chart shows us “Dumb money” confidence (retail mutual fund buyers, small speculators, small OEX traders, odd lots). It is becoming evident that the smart money is bailing on this market. Their confidence level has declined from over 60% confident—to less than half of that. Meanwhile, working in a polar opposite direction, the least efficient market timers out there (unsophisticated money) is growing estatic. They’ve gone from about 40% confident last october (which was, of course, when the smart money was picking up cheap stocks during that months selloff) to a recent high of 80% confidence. 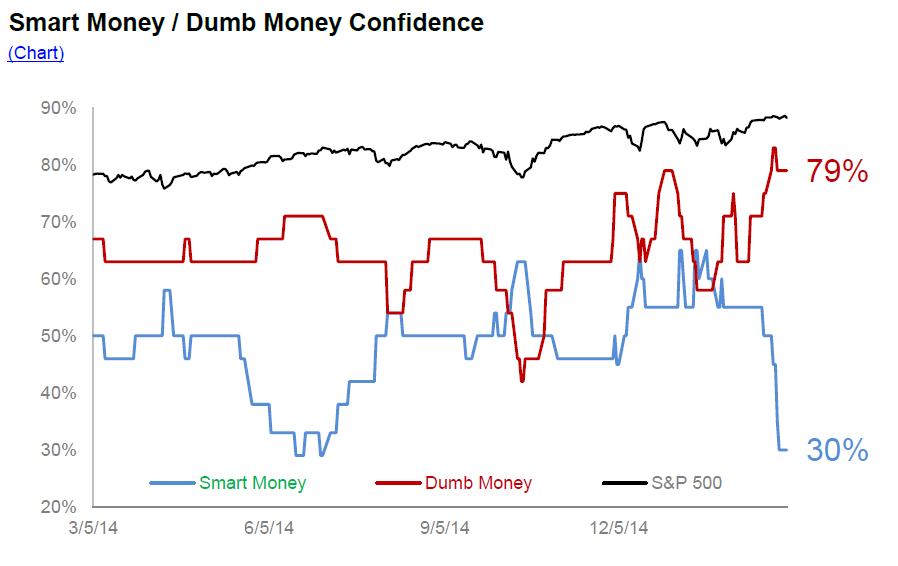 The chart below – also provided by www.sentimentrader.com – is an interactive spread sheet. I chose to look at the markets since 2000, to give us readings through both market bubbles (2000 tech bubble, 2007 subprime housing bubble) and subsequent crashes, along with the interim up/down stuff in between those events. I’ve marked in green where the confidence levels went extreme in a favorable way. That is, a simultaneous bullish attitude by smart money coinciding with the dummies fearfully selling. As you will note, these levels are usually LEADING indications of a market correction. Conditions went favorable for a while before a bottom was put in on the bigger moves. Same goes with the unfavorable market confidence spreads (smart money selling, dummies lovin’ the market). It’s a leading indicator – especially in the case of the extreme readings. The extreme confidence spread between these groups that we are observing at this time is usually a leading indicator suggesting pain awaits us in the form of a deeper than normal correction. 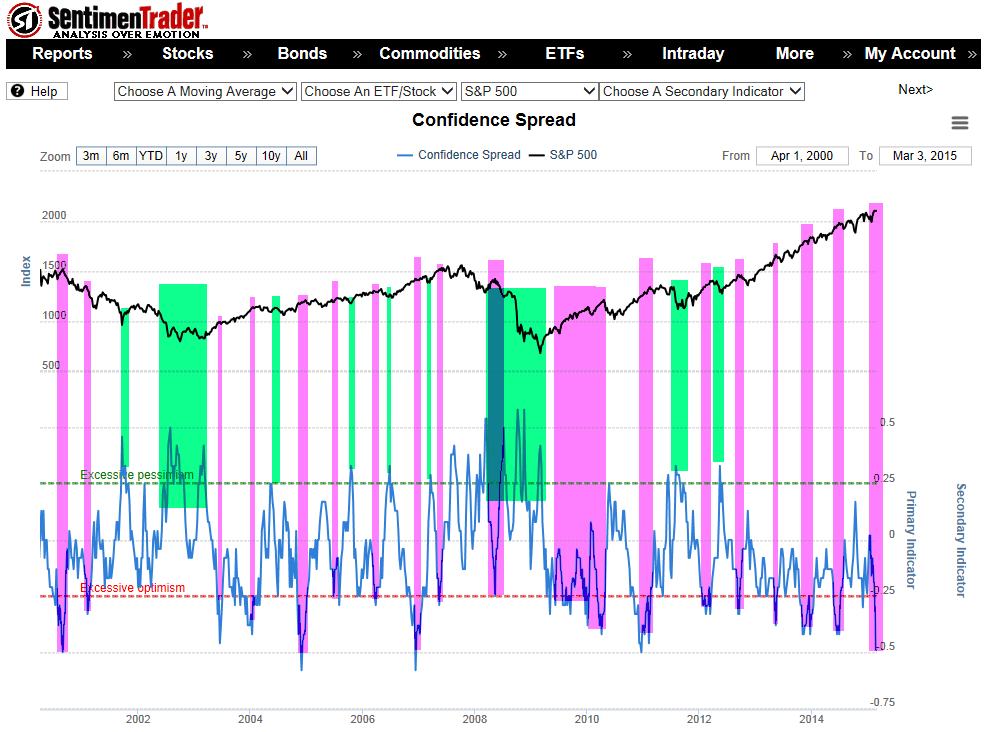 Stock markets have seasonality on their side right now. But that bullish window is slowly closing. I’ve presented blogs in the past illustrating that the “Sell in May” phenomenon is more of a guideline than a hard and fast rule. There have been market tops that lead into flat periods, or selloffs in March and April in the past. Here is one such blog:

As such, we at ValueTrend are re-thinking our commitment to this market. We’re 15% cash in our equity model right now. We may choose to re-enter with that cash, or raise more cash as time moves forward. We do maintain a bullish bias due to the undeniable trend (higher highs and lows, 200 day MA slope and support, etc). However, we are keeping a close eye on things at this time. Sentiment extremes have a funny way of being accurate sooner or later.

ValueTrend results are in for February

Market beating performance with lower volatility. Have your cake and eat it too. See our recent performance chart at:

My next appearance will be on Wednesday March 11th, 2015 at 6:00 PM EST for their 1-hour call-in MarketCall show. Phone in with your questions on technical analysis for me during the show. CALL TOLL-FREE 1-855-326-6266. Or email your questions ahead of time (specify they are for Keith) to [email protected]