Home / Ignore gold’s trend at your own peril

Ignore gold’s trend at your own peril

It seems to me that there are two types of gold investors. One type- who I would classify myself under, look at gold as just another security. We’re pragmatic investors. That is—we will consider it if the technical trend is up, and we will trade accordingly. We’re not in love with gold, nor are we fixated on any security for that matter. It’s just another security in the vast universe of positions that can be considered for a trade, should our filters determine it’s a fair bet to do so.

Rather than enter into a philosophical discussion about gold and the perils of the US debt situation, let’s take a look at the gold charts. 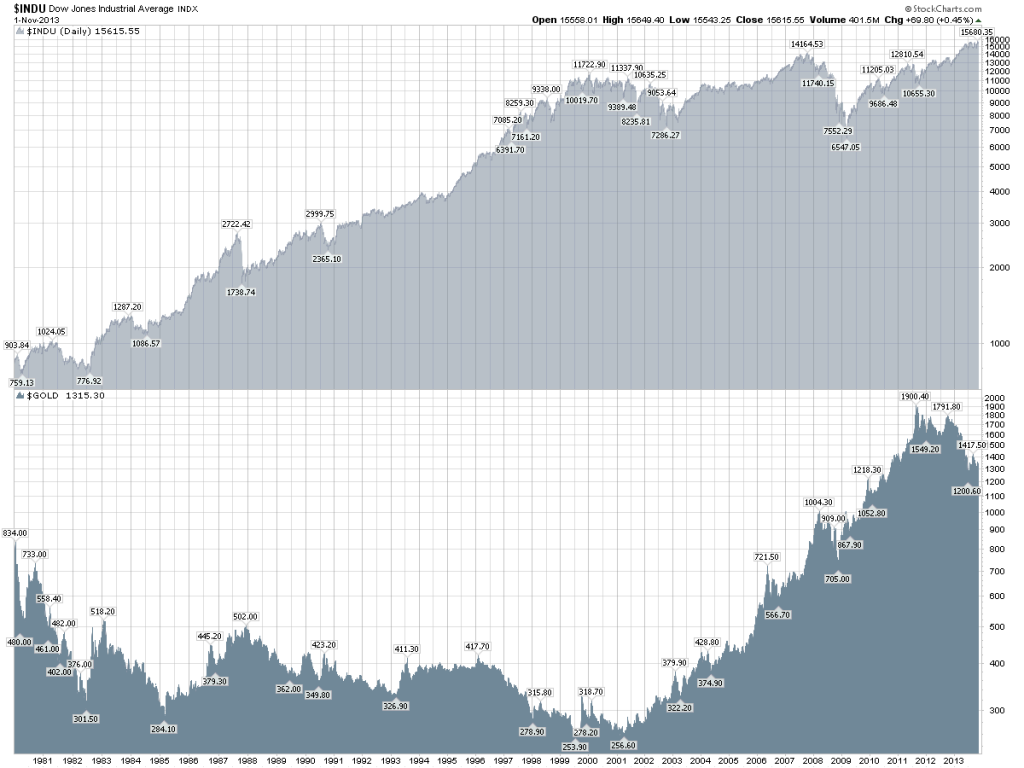 But notice what happened when the sideways consolidation began  for the U.S. stock market in 1999. While the Dow failed to hold above 12,000-ish for the next 12 years (0% return), gold surged from a low of about $250/oz. to a 2011 high of $1900 (750% gain). Gold was obviously a great hedge –and a fantastic security to hold during that period of low returns on stocks. Gold acted as a negatively correlated asset to stocks during this period.

It would appear that the party for gold has ended, now that the stock market party has begun. After its peak in 2011, the trend has been decidedly down for this commodity. Meanwhile, the U.S. stock market has recently broken out of a multi-year consolidation pattern. A new bull market has emerged for stocks (interim corrections aside). It would appear that gold is, once again, acting as a negatively correlated asset to stock prices. The short termed chart, below, paints a clear picture of this trend. Lower highs, lower lows, and a price that trades below the 50 and 200 day MA’s –which are also pointing down. Gold is currently down about 34% from its highs.

Thematic investors may be waiting for the “Great inflationary collapse of the U.S. dollar”. From a practical point of view, they’ve lost 34% of their money since 2011 by sticking to this story. I’ll join them when gold stops making lower lows, consolidates, and breaks out to the upside. I will not buy gold, or anything else for that matter, based on a theory or theme. Perhaps gold will reverse its trend and begin rising when the stock market party ends. Meanwhile, I prefer to invest with the trend in mind – meaning that I am avoiding gold.