Idea’s for seasonal and technical rotation

In about 2 months, we enter into the best six months “buy” season. Officially, it arrives about the end of October/early November, but you can get a buy point any time between August and early November. Some sectors are affected by seasonal trends to a greater degree than others. As the “worst six months” season ends, sectors to potentially sell include defensive areas like Treasury bonds, Consumer Staples, Utilities, and some of the major commodities like oil, and gold. Sectors on the “buy” side of seasonality (best six months) can be Industrials, Consumer Discretionary, Technology, Home building and financials.

Please note – I’m not a seasonal expert, but I do “hang out” with a few of them, and that’s influenced my way of viewing market cycles. For the record, at the bottom of this blog is a brief list of the leaders in seasonal studies, along with their websites. I recommend you peruse all of the “real” seasonal guru’s commentaries periodically.

All of the above said, I’m a Technical guy first, last and always! I look to the charts first; seasonals are a background for my analysis. Below, I will cover three of the stronger and more widely owned seasonal “Buy” sectors – Discretionary, Technology, Financials from a technical perspective as my priority. I’ll contrast them to three widely followed predominant “sell” sectors – Staples, Utilities, and Treasuries. The idea here is to see if seasonals and technical agree…or not! Here goes:

Seasonal Losers for the Winter 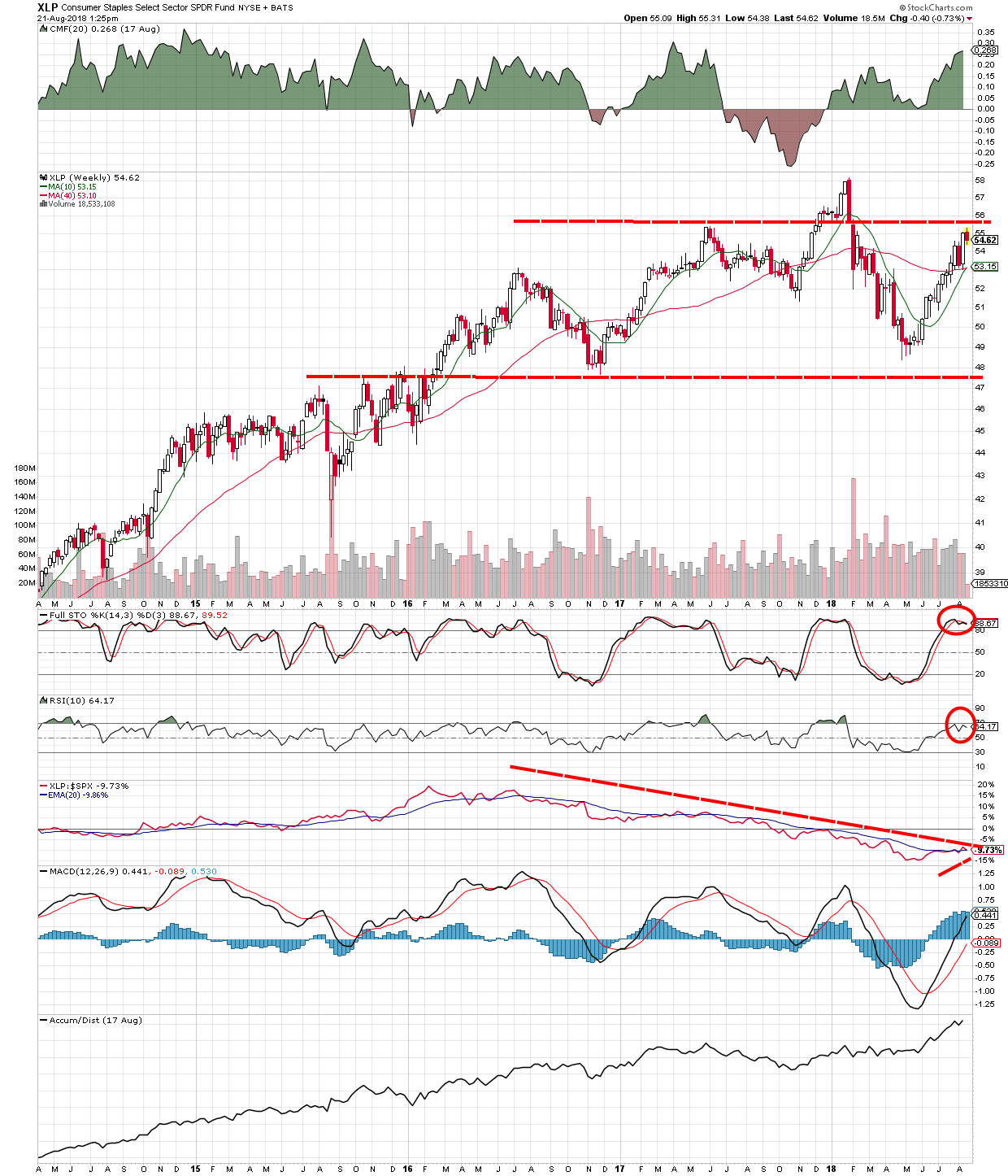 We own the XLP ETF at ValueTrend, and I put it on my “Top Picks” on BNN in the last show. As you will note from the chart, the sector bounced off of a significant support point, and is now nearing is major resistance point. Its overbought, yet still long termed underperforming the broad markets. Time to sell is near, right on schedule with the seasonal trends. 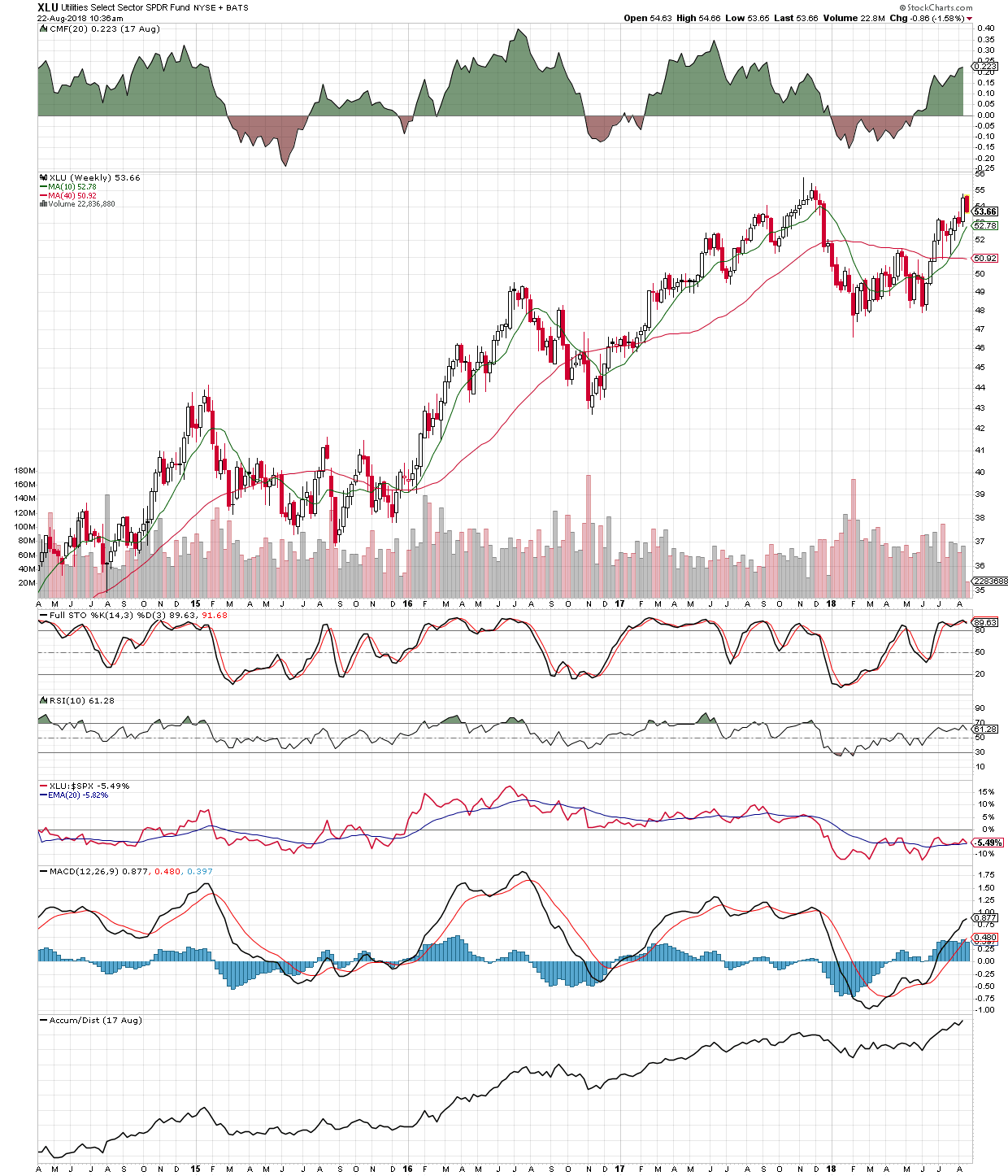 Here’s something that doesn’t happen too often. The same sector on both sides of the border are in opposing Phases (see my book Sideways for an explanation of market Phases). While the US Utility sector, as illustrated by XLU, is possibly facing a sell level at a point of technical resistance at $55 after its strong upside – the Canadian equivalent via ZUT is basing after a significant decline. Clearly, XLU is something to be avoided until and unless it can break $55 making it look appropriate for a seasonal trade.

Meanwhile-  ZUT might be something to consider as a buy candidate, but  ONLY if it breaks out of its base ($16.50-ish). This pattern defy’ s the seasonal trade on the Canadian sector. Very interesting, indeed. 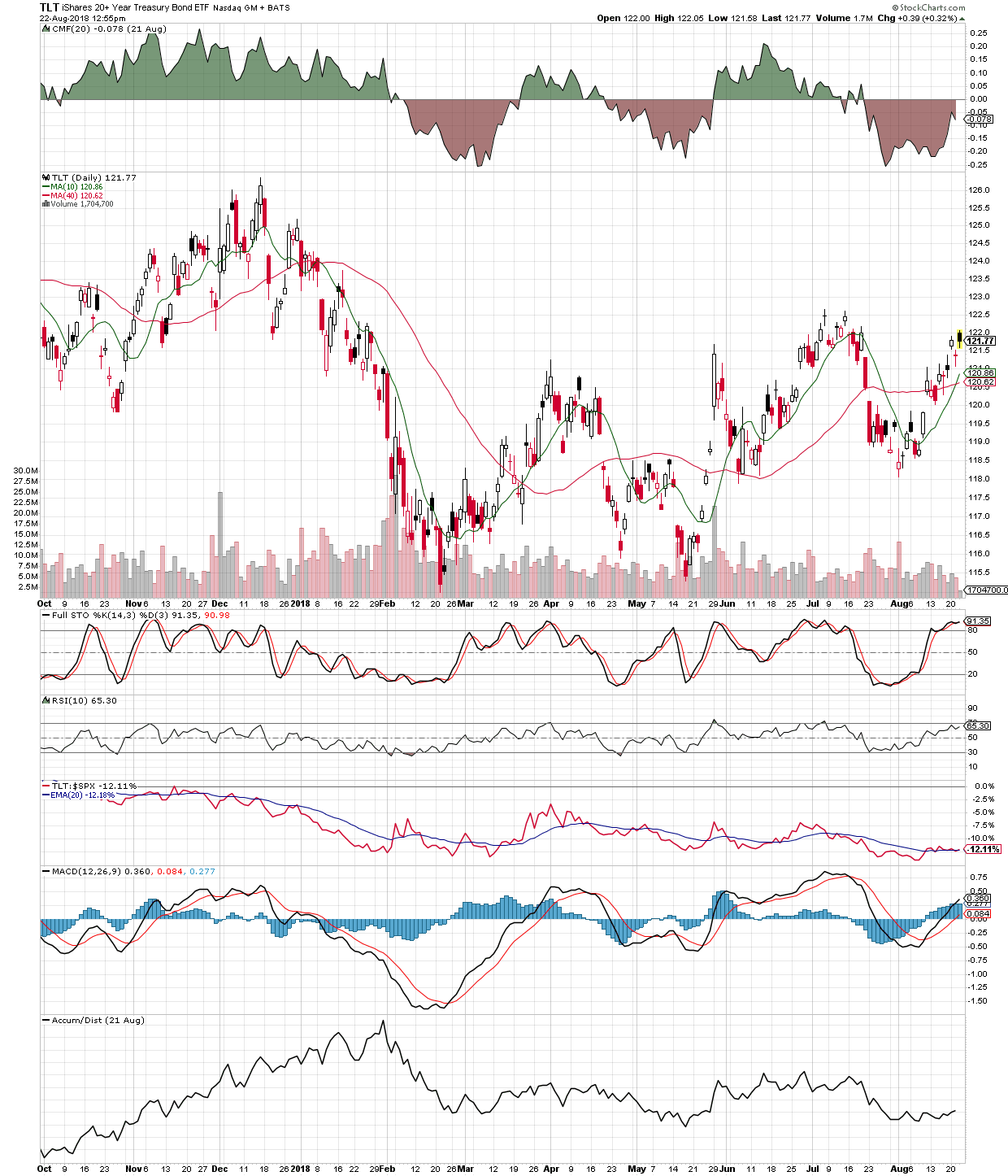 I’ll use the TLT ETF to illustrate the bond market. It represents the 20 year US Treasury bond and it’s a well followed marker for bonds. As you can see, the TLT did follow its seasonal tendency to be strong over the summer, and had a particularly sharp move this month (August). You can also see that its coming into technical resistance at around $122, while being overbought on the daily chart via high RSI and stochastics readings. Overall, I’d suggest that the T-bond looks to be following its seasonal pattern. Its likely a good sell candidate as it enters into its seasonally weaker period over the winter.

Seasonal Winners for the Winter 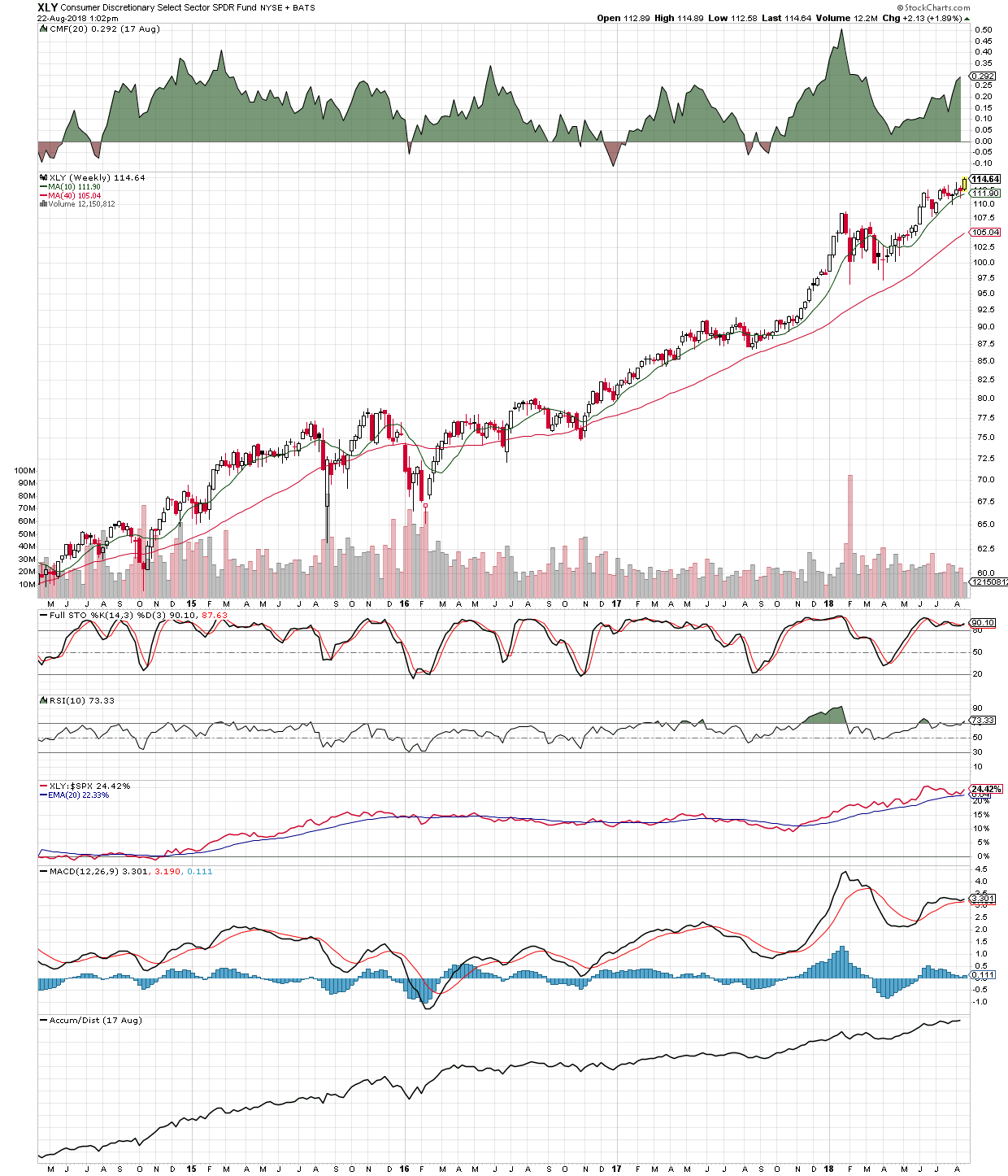 The XLY ETF is heavily weighted in Amazon. 25% of the ETF is in that one stock, in fact. This skews the sector, given the overweighting of a top performing stock. But, it is what is is, as they say. Clearly, XLY had no weakness this summer – probably because of the AMZN weighting. It’s still on trend, although I have to think that an overbought pullback would provide a better buying opportunity. You can see on this weekly chart that momentum is overbought, and stochastics is rounding over. MACD looks like it wants to do an overbought crossover (moving average lines on that indicator – second pane from the bottom). I’d buy on a pullback.

Here we go again…like the XLY ETF noted above, XLK technology ETF has major weightings between two stocks. Apple and Microsoft represent 26% of the ETF. So, you might consider this ETF as less efficient as a representative of the sector – give that concentration. Like I said above when looking at XLY…it is what it is…

As you will note on the chart, the sector is overbought via the momentum studies, and may need the pause that refreshes before buying new shares at this time. And, like XLY, it didn’t hesitate during the summer – disrupting the usual seasonal tendency to underperform a bit in those months. Buy on a pullback.

Note that financials contain different sub sectors (ie tier 1, regional banks, banks only for people with purple pants, lifeco’s, property health, etc) that vary slightly in seasonality, so be sure to go to one of the seasonal expert resources noted at the top of this blog to get the more precise seasonal dates. I’ve noted the two majors here. I didn’t include the purple-pants banking sector: 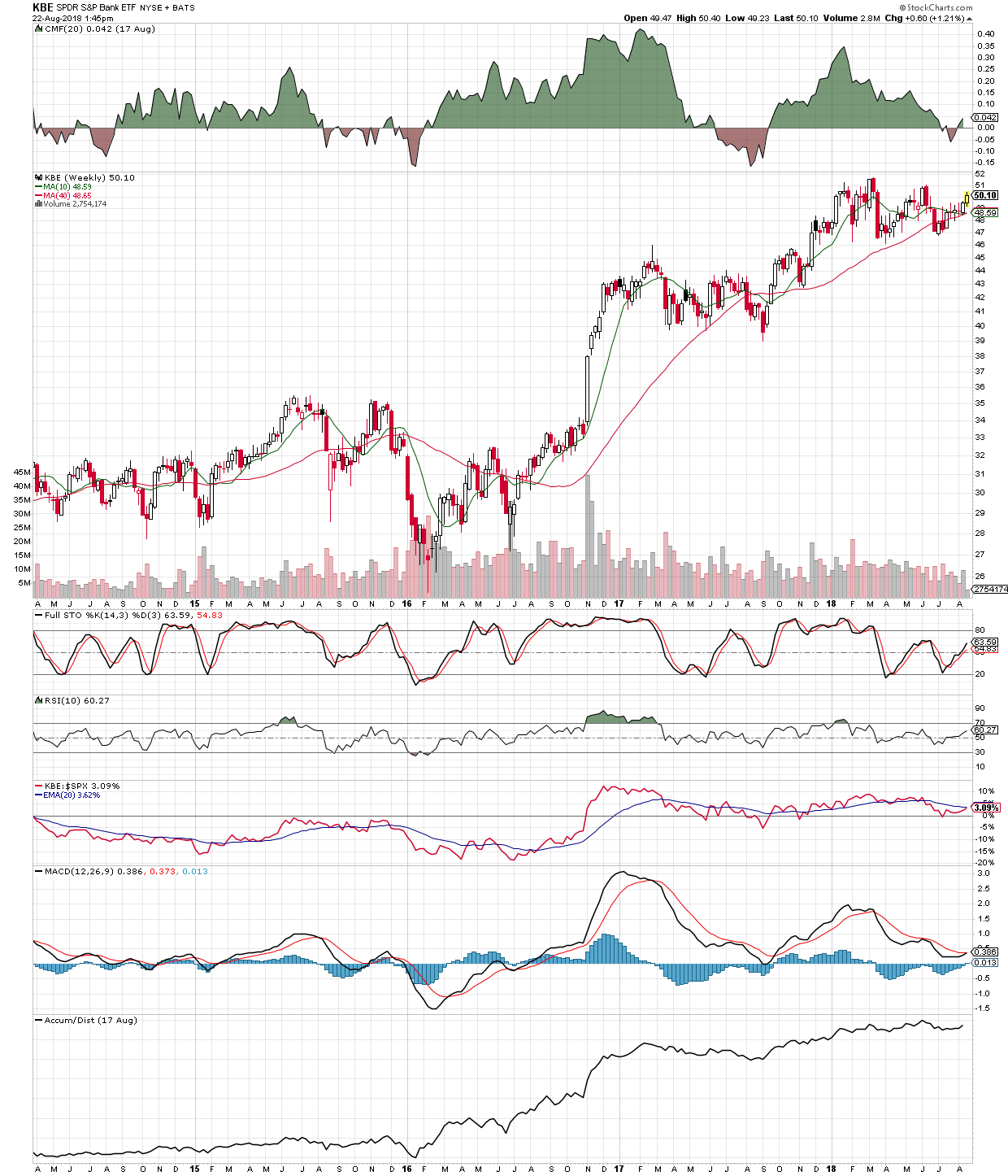 Banks: KBE is the SPDR ETF I will reference for this sector. It is not overbought. In fact, it is consolidating within a rough uptrend. If the ETF breaks $51-52, this might indicate that a new up leg will begin over the winter. 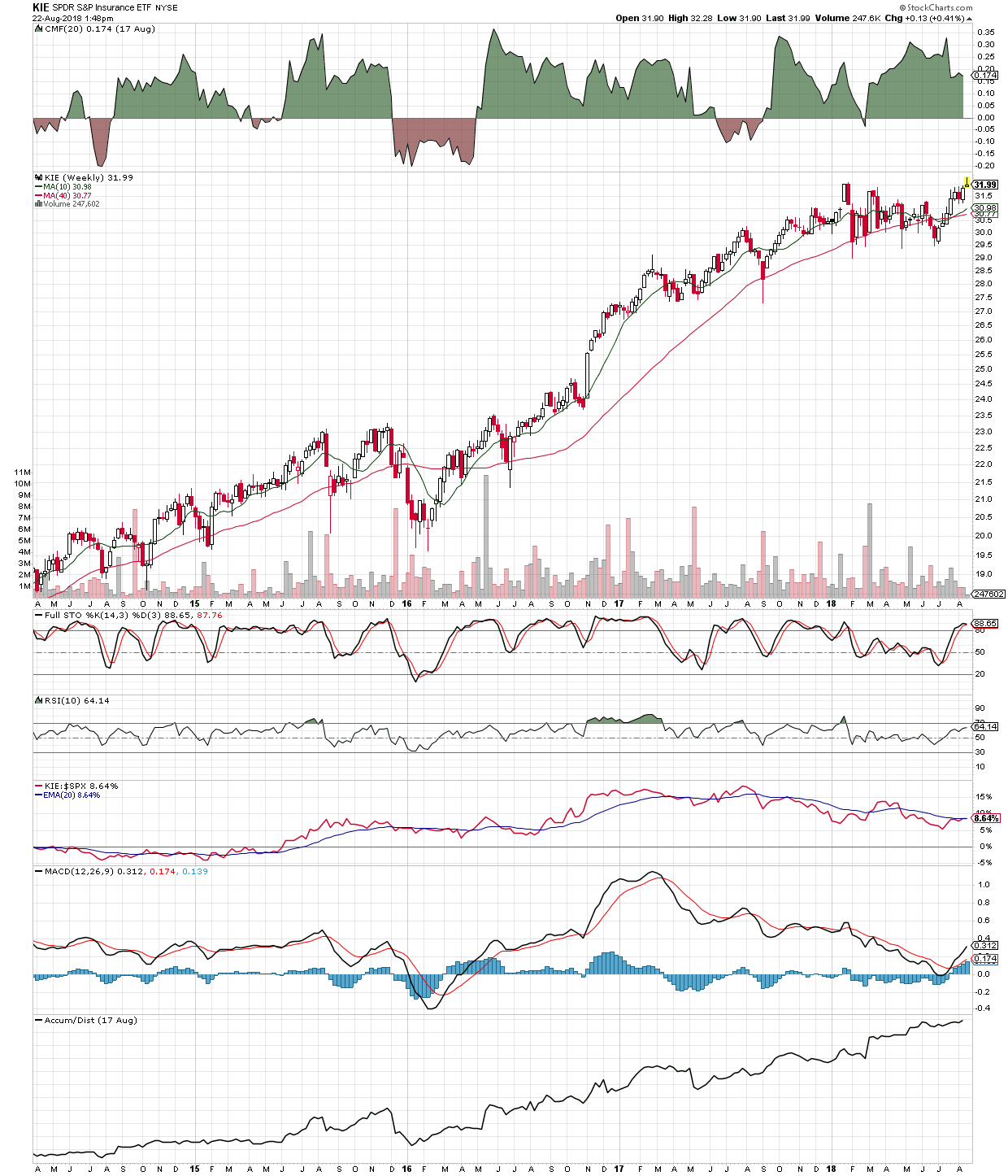 Insurance: The insurance sub-sector within the financials – represented by the SPDR KIE ETF, consolidated over much of this year.  Its recently been attempting to break through its approximate lid of just under $32. A bit of time above $32 and I would call this a very bullish chart. Clearly, this is setting up to be a reasonable seasonal bet.

Keith on BNN this Friday August 24th at noon

If you have questions about the technical analysis of stock trends for individual stocks, be sure to phone in with your questions for Keith during these shows.

Yale and Jeffery Hirsch Hirsch: The founders of seasonal investing in North America, Yale Hirsch, and now, his son Jeffery, have produced the Stock Trader’s Almanac since 1967! I was 5 years old that year, so can’t say I was his earliest subscriber – but I did start buying the almanac in the early 1990’s.

Don & Jon Vialoux: Don was the head Technical Analyst at RBC for many years before he went independent – eventually creating the most popular Technical Analysis site in Canada. Don was the inceptor of the well-known seasonal slogan for the Best Six month strategy: “When it snows, in you go. Sell in May and go away”!  Jon took what he had learned from his father and has created a powerful website tool that instantly provides seasonal graphs for most North American sectors, along with a huge number of well followed individual stocks. I recommend following both of their daily write-ups. I also subscribe to Jon’s EquityClock research—its invaluable.

Brooke Thackray: I was introduced to Brookes work in the mid 1990’s through his first book, Time in, Time out. Brooke combines witty market and economic commentary within his technical and seasonal newsletter every month. He also produces “Thackray’s Guide’s” and video’s regularly. I strongly recommend subscribing to his free emailed newsletter. Its objective is to give us heads up on upcoming seasonal trades. I like the fact that Brooke tracks his own advice in the newsletter, and tells you if the last set of seasonal trades have paid off. Finally, the part of his newsletter I enjoy the most is “Brookes rant”. Sometimes political, sometimes economical, sometimes deeply philosophical    – it always makes me smile, and often adds a new perspective on world events.