Home / I seem to have gapped on that…

I seem to have gapped on that…

Sometimes we refer to ourselves as “gapping” when we forget something. We then try to fill that gap with an apology, hoping things will be forgiven by the person who our forgetfulness has impacted.

Sometimes, markets like to gap. Read any good book on technical analysis (may I humbly suggest my book Sideways?) and you will find out that there are many types of gaps. For example: Breakaway gaps occur after a period of consolidation. Continuation gaps occur within a trend. Island gaps (top or bottom) are two gaps within proximity of each other that can often mark a top or bottom within a neartermed trend.

The concept behind filling the gap is that a gap represents overzealous behaviour over a very short period (usually between a daily close and next day open).  A market that opens, say, higher than it closed (creating the gap) and stays above the prior days close probably represents an overdone level of enthusiasm. Thus, the market should fall in the coming days back to the first day’s close in order to wash out that irrational exuberance, by “filling the gap”. From many perspectives, this psychology makes lots of sense. It’s kind of like a momentum indicator that becomes overbought. Overbought markets can pull back (and oversold markets, or gaps down, can become oversold). 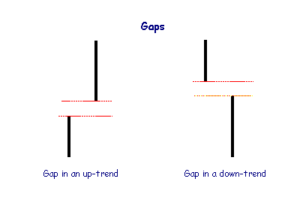 I don’t necessarily endorse the automatic assumption that a gap will be filled. The challenge with the theory that gaps must be filled is that – in the case of a continuation gap– you are unlikely to see the gap filled. That’s because it’s in the midst of a trend (up or down). A continuation gap suggests that the trend is growing stronger. Similarly, island gaps represent pretty strong buying opportunities based on the “fool me once, shame on you, fool me twice shame on me” mentality that the second gap represents. It’s unlikely that an island gap will be filled given the power behind its repeated oversold/ overbought gap pattern.

On Wednesday of this week, markets opened higher than Tuesday’s close. The S&P500 soared to new highs. I noted the gap, and thought that I might print a couple of charts that represent a few years of daily chart activity. I’ve circled prior gaps on these charts since 2014. As you will see by my annotations, the gaps are not always filled—or at least are not filled within any reasonable period of time to suggest anything more than randomness. By the way, I could print 20 more daily charts and you will find something similar. Gaps are often, but not always filled within a reasonable period of time (say, a week or two).

So, don’t take it at face value that Wednesdays gap will be filled by an aggressive retracement. Sure, it could happen. And perhaps the odds are for a potential of a pullback because of the gap. But its not a given…the odds of this weeks’ gap to be filled are reasonable, but not to be taken as an absolute.