Home / I love the smell of napalm in the morning!

I love the smell of napalm in the morning!

I love the smell of napalm in the morning. It smells like Christmas!

Robert Duvall said this famous line in Apocalypse Now. I’d have to share his sentiments about the stock market’s recent carpet-bombing. I love the smell of fear on the street (Wall Street, that is) – it provides us with opportunities. I love my cash (we’ve been 47% cash in our equity model for the summer). Cash will provide the means of taking advantage of the upcoming opportunities.

Sentiment-wise, markets are NOT yet approaching true capitulation at this point. Smart/dumb money is about balanced in opinion. There is no sign of retail investor capitulation. But there’s enough price volatility to suggest we will get to that point in a matter of weeks, not months. And that, my friends, is going to offer us some truly exciting buying opportunities.

Today, I’d like to look at some “big picture” charts for the US markets—and then finish with my much-covered short termed timing system. Above is a 25+ year chart of the S&P500. Note the green 10-month MA line on the chart (slightly longer than a 200 day MA). It has accurately signalled tops and bottoms over various market phases (refer to my book Sideways for information on the 4 phases). It signalled falsely three times–circled in red. Not a bad track record at all. The market is currently holding above this line, despite the near termed break of the 200 day line on the daily charts (not shown). So the big picture is still bullish according to this dynamic.

Next (below) let’s look at a line chart since the beginning of the recent bear/bull cycle (2006). As you will note—the 2007 Head & Shoulders Top signalled the onslaught of the bear market, followed by a Head & Shoulders Bottom in late 2008/early 2009. The left shoulder of this bottom formation marked the beginning of the QE programs initiated by the US Fed. Note the consolidations, then resumption of the bull market at the end, then beginning of each rotation in easing/ stimulus programs. I find it of no coincidence that the recent distribution/consolidation pattern on the S&P500 has coincided with mumblings by the Fed on the timing of their normalized interest rate policies. Will the end of easing signal the end of the bull market?

According to longer termed cycles—we should be in for a 15-20 year bull market – which, by the way, officially broke out in 2013 after the S&P finally broke its lid of 1550. Note that the Dow chart (below) showed a higher peak in the 2007 bubble vs. the equal peak in the S&P chart (top chart on page). I look at that period from  1999-2013 as a secular sideways period. The Dow chart does show us that 10-15 year secular sideways phases lead us into 15-20 year secular bull market phases. We are only 3 years into the current bull market despite the bottom of the last trough of the sideways market being in 2009—the bull didn’t verify until its break to a new high in 2013). Thus, it may be reasonable to expect a continuation of the bull market for at least 10 more years despite the near-termed madness, and despite an end of easy money. Having said that – I do believe the new leg of the bull market will be a “stealth” one of sector rotation. More on that during my talk at the MoneyShow in October (hope you can make it). 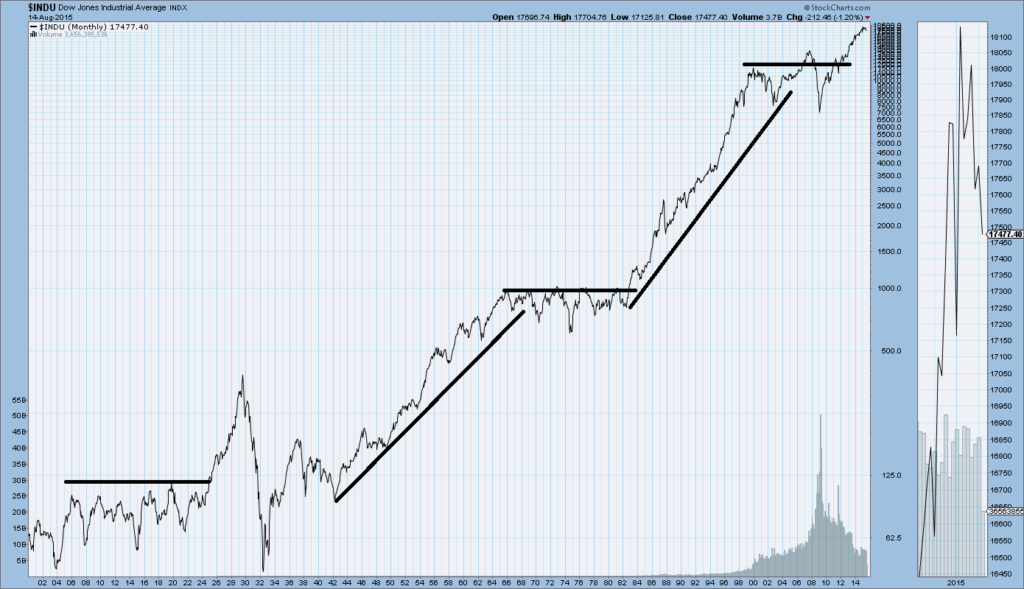 Finally – below is my ongoing updated short termed chart. We still don’t have verification of a “buy’ signal, despite the S&P’s run along the lower Bollinger Band. Stochastics, which had hooked up a week ago, was never verified by RSI (see my last update https://www.valuetrend.ca/keiths-short-termed-trading-system-near-a-buy-signal/) . The market, according to this system, is not yet oversold enough to verify a buy signal. For this reason–I continue to hold lots and lots  of cash!

But as noted above—the big picture still looks bullish, and I will be buying bargains to take advantage of the recent pullback when the time is right. It’s how we at ValueTrend have continued to outperform the broad markets while experiencing dramatically lower risk (click on our performance tab above). I hope you’ve been holding cash and experiencing the same results in your portfolio. If not, perhaps you might want to contact us to have a chat! 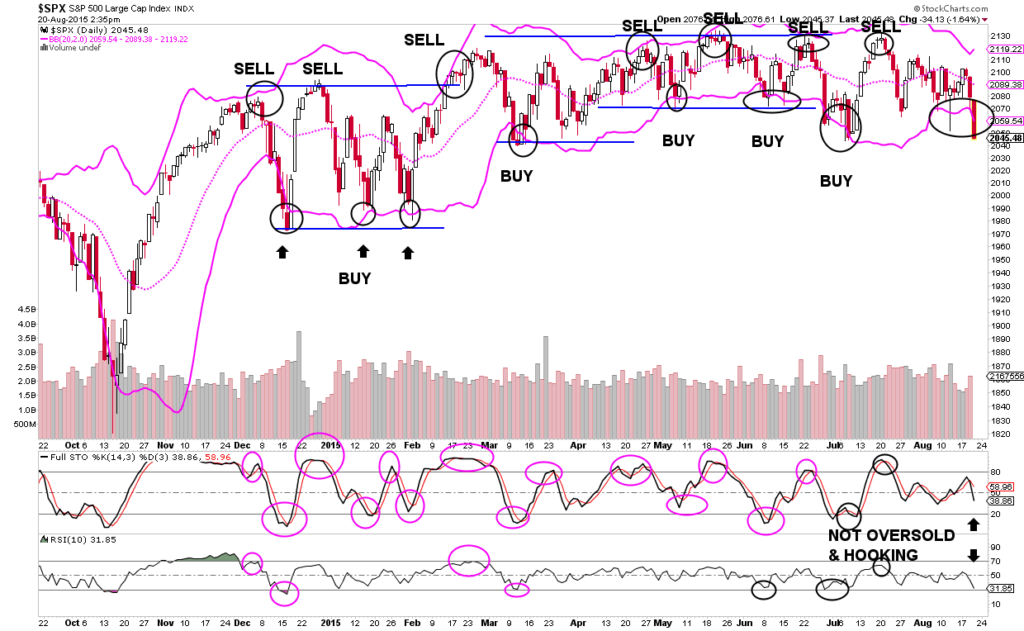 I’m on BNN’s MarketCall show next Monday August 24th at 6:00PM EST. Tune in, watch the show and call in with your stock questions To ask your questions, contact MarketCall by any of the means listed below. Be sure to mention that you read my blog!