Home / I have a dream

I have a dream that my four little children will one day live in a nation where they will not be judged by the color of their skin, but by the content of their character.

Much is being talked about corporate policies surrounding Environment, Social, and Governance (ESG). Are corporations claiming to adapt these policies truly adapting King’s dream … that is, of judging by character? It is my belief that many of them are NOT adapting the spirit of King’s famous dream. Instead, they are twisting  the dream to fit an agenda that, at best, is questionable for their stakeholders (shareholders, employees, and customers). Are corporations (and governments) striving for equality based on character and merit – or are they following formulaic politically biased agendas or a quotas?

Today we’ll look at the shareholder (stock) perspective of ESG managers, and individual stocks via charts.  So…are  so-called ESG firms, or so-called “WOKE-firm” stocks doing better, the same, or worse than the market since adapting such strategies?  I might just throw a few items for consideration surrounding those technical observations.

Many investors use large asset managers to oversee their retirement and investment accounts. These asset managers, Blackrock being a significant player, have bought into the concept of buying stocks ranked for high “ESG” focus (Environment, Social, Governance).

Of course, the initial question that has always come to my mind has been who determines what is “good” social policy, or “good” environmental policy

For example, lets look at social policy. Is it a “good”, “fair”, or “prudent” policy to favor hiring employees based on race, gender, religion or sexuality – ahead of, as King said, “the quality of their character”? Perhaps some might think so. I can’t say I do. All businesses owe their existences to their stakeholders (shareholders, employees, customers). Pushing a quota in social, climate, or governance based on some sort of agenda – ahead of (rather than in sync with) stakeholders is bad business. If done right, however, it should show up as outperformance.  If done with a costly political idealism, placed ahead of stakeholder interests, it will show up in charts as underperformance.

Lets look at Blackrock’s EAFE World ESG (optimized for ESG by their parameters) fund. As you can see, the fund did not add any value insofar as migrating around the bear market in 2022. But, from a relative performance perspective, it outperformed the non-ESG MSCI world index. I’ve marked this on the chart. Obviously, the metrics that Blackrock used in their MSCI ESG index resulted in losses during the market, just as most managers experienced. However, the fund experienced better performance than the MSCI world index. They seem to have a handle on what screens will enable them to buy within the context of ESG parameters, and still outperform. Evidence suggests that this type of fund can be an alternative to standard indices, should you be a buy-and-hold index investor. Not so much if you are a more active investor with an eye on trading long termed market cycles, such as ValueTrend. However – the point is that an ESG screen, done well, shows evidence of market outperformance for index-orientated buy & hold investors. 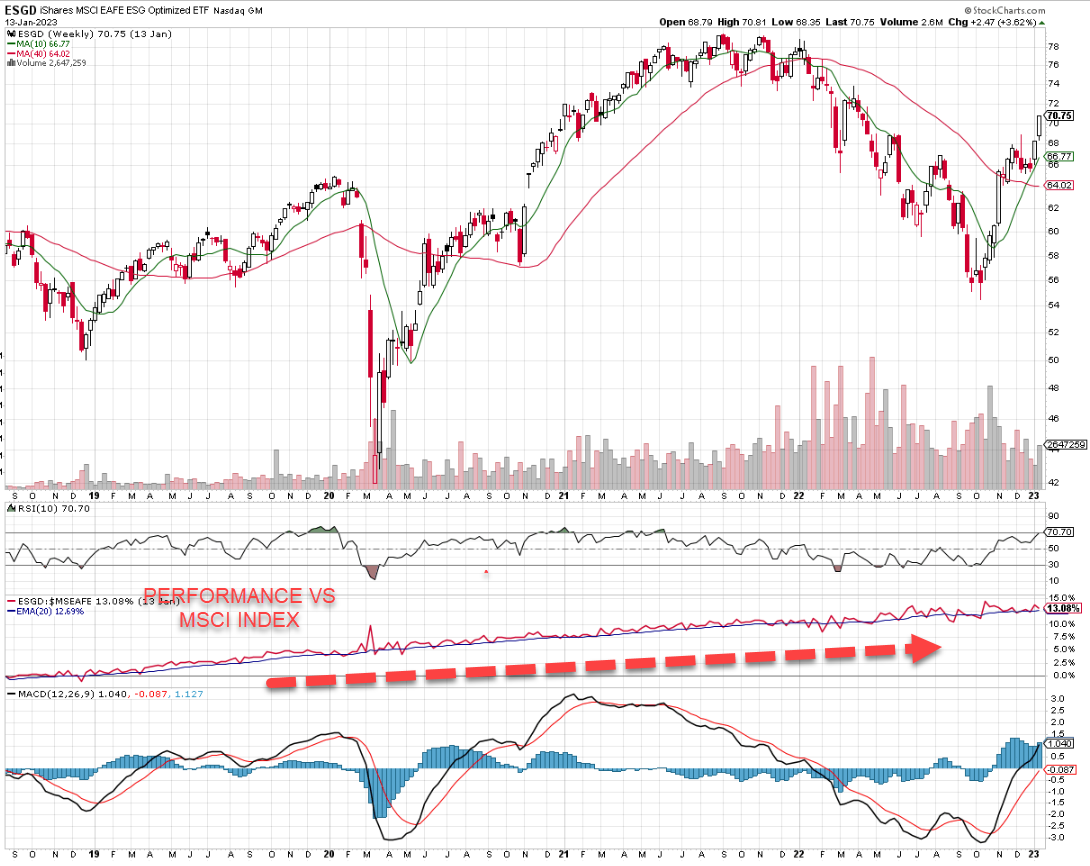 The term “WOKE” began as, per Martin Luther King’s campaign, an awareness campaign towards racial discrimination. People started applying the term more broadly – covering other social issues, such as sexism, gender ID, poverty and LGBTQ. Not such a bad thing, perhaps. Unfortunately, WOKE-ness has  likely morphed to become a segregating platform rather than a policy of fairness and good character.

The WOKE movement and winter now share the commonality of too many snowflakes.

Back to investing: There’s been a saying going around in the investment world. “Go WOKE, go broke”.  I wanted to explore if the tendency for corporations embracing “WOKE-ness” is  good or bad for stock performance. Are companies who place emphasis on racial, gender or sexuality – (the antithesis of King’s policies of judging a persons character) –  doing OK? Lets look at just some charts of headliner firms called out for “WOKE” agendas. I’m strictly interested in the bottom lines here – did they go WOKE and flourish, or did they go WOKE and go broke?

Ex- Disney CEO Bob Chapek, became famous for this California-based firms WOKE identity. The firm criticized  Florida’s decision not to introduce young children of grade 3 & under to the subjects of sexual orientation and gender identity. The company, incorrectly calling this bill the “Don’t say gay” law – fell under criticism of parents.  Think for a moment – who is Disney’s customer? Disney then got itself in further hot water by filming a “Reimagine tomorrow Summit” where producers openly discussing pushing LGBTQ content and increasing the sexualization of children’s entertainment and transgender themes. The stock was hammered – cut by more than half – well before the 2022 bear. This is unsurprising, given that 2/3rds of Americans are not interested or reject WOKE political posturing. WOKE most certainly made Disney broke.

Known for its banning of Trump after the Capital riot, Twitter has also developed a reputation “shadow banning” and even censorship. Accusations of anti-conservative speech have been made, although denied by the firms. For example, there has been a potential of controversy surrounding Hunter Biden, and COVID issues. Facebook (META Platforms) faced similar criticisms. META stock was cut in half between 2021 and 2022. Elon Musk purchased Twitter in 2022, and has promised to re-open dialog, beyond illegality. The stock price of Twitter was plummeting – cut in half like META.  But shareholders did well on Musk’s purchase before going private. Many of the banks, including Wells Fargo, have stated racial hiring quotas, in addition to polarized political stances. Hiring based on race vs character. What would King say to this? Well, the market had something to say. The US banks generally underperformed the SPX over the past couple of years, particularly during the 2022 bear (ZUB  saw about one third more drawdown than the index at around 30%).  Wells Fargo saw a 38% drawdown (much worse than the banking sector) suggesting something was amiss – even taking into account the poor showing of the group as rates climbed.

Netflix stock was cut by 2/3rds when the company began promoting a speech policing and censorship policy curtailing any content that might “offend” certain supporters of the WOKE culture. The company had posted a stand up comedy by outspoken, no-holds comedian David Chappelle – resulting in far left employees protesting. After removing the show, and hearing the protests from viewers, the company re-posted Chappelle’s films.  Netflix determined that it would herein “let viewers decide what’s appropriate for them”. The stock has been moving strongly since this decision – well ahead of the market per the chart below. Netflix almost experienced a WOKE n’ broke moment when it plummeted 2/3rds. Thankfully, they have gone back to supporting stakeholders above adhering to the speech-police. And that shows in the stock performance of late.

Google determined that it would invoke a word-police option to ensure WOKE-style “inclusiveness” in its auto-correct search tool. For example, using “humankind” vs mankind (or the virtue signaling Trudeau’s WOKE term, “peoplekind”). Google says to use “property owner” vs landlord. Pushing users towards woke language has also thrown up major flaws. For example A transcribed interview with ex Klu Klux Klan leader David Duke, in which he uses offensive racial slurs and talks about hunting black people, prompted no warnings! But it suggested President John F Kennedy’s inaugural address should say ‘for all humankind’ instead of ‘for all mankind’. Whatever the case, this policy certainly hasn’t helped the stock – its underperformed the market, falling about 40% with no signs of recovering.

Jennifer Sey, the former Levi’s brand president says the company pushed her out over her outspokenness against COVID-19 school closures.

Sey has written a book condemning WOKE-ness, and says the movement has spread from academia into corporate boardrooms because most CEOs do not have the guts to stand up against it. “Levi’s Unbuttoned: The Woke Mob Took My Job But Gave Me My Voice,” that “woke capitalism” is simply “corporate America’s attempt to profit off Millennial and Gen Z activism”. The stock has been cut by more than half, stuck in a perpetual downtrend since 2020 (even during the 2021 bull, and the recent surge in the staples sector). Clearly, WOKE-ness has not helped LEVI pull up its pants.

Nike is one of a number of firms involved in what some have accused of empty virtue signaling, or even appropriating the protest movements for their own commercial gains. Ad campaigns signaling alignment with BLM and other movements make for feel-good advertising. But is that what consumers want, or care about when they buy shoes? Apparently not. The stock is yet another gone-WOKE, gone-broke story. Can’t strap on a pair of NIKE’s and run from that reality. Thankfully, the stock has been running up lately, probably due to a re-focus on their customers, profits, and stakeholders again.

We focus on timing macro market cycles and buying stocks at the right price and right time. We only buy when we view opportunities for upside.  Not on buying stocks of companies with an objective of meeting corporate political brownie points, ESG goals, or WOKE idealism.

Our clients don’t want their investments and retirement accounts used to push political idealism. Instead of judging stocks by some ESG theme or WOKE agenda, we judge stocks by their trend, risk, and fundamental profiles.

As Martin Luther King would say about people – we judge stocks, like people, by the content of their character.