Home / I dont believe in Santa, but there may be an Elf rally coming soon

I dont believe in Santa, but there may be an Elf rally coming soon

For those unfamiliar with my rules– to confirm an uptrend (mid termed trend) on the weekly chart we need:

Its ok if one of the conditions are broken to maintain a trend —for example, we often see spikes below the 200 day SMA during bull trends. So long as we an eventual higher high, and the last dominant low is not taken out, we are still on trend.

A break of trend into a sideways market can be signalled by one or two of the above tests failing. For example, in the recent sideways period between January and December, we had a new high (end of September), but we also had a break in the 200 day SMA. The lows had not been taken out, but they were not getting any higher. You can see this on the chart below. 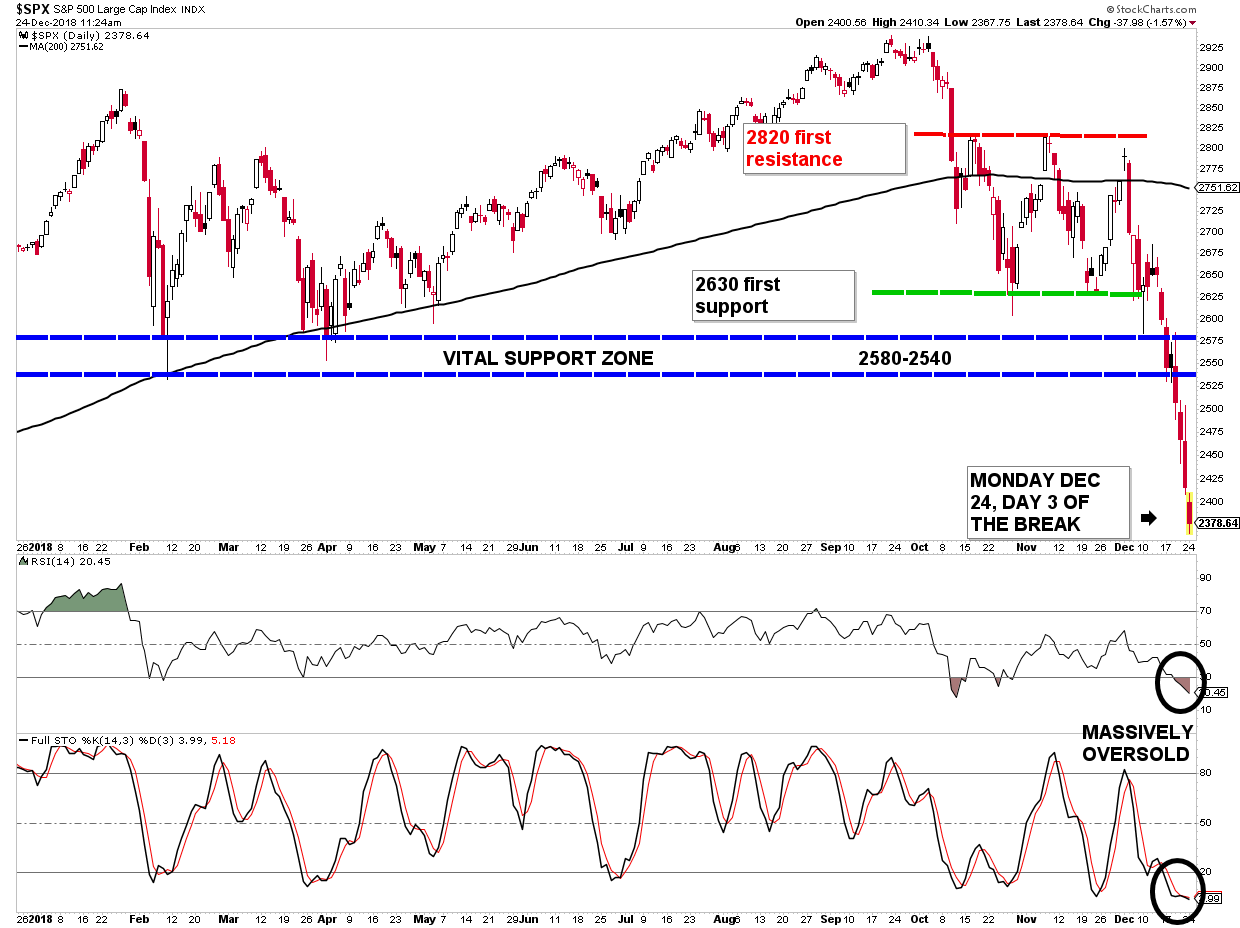 A new bear market is signalled by all three conditions of the bull trend failing. This entails:

In October, the S&P 500 broke its 200 day SMA. It flirted with that average, but didn’t materially move above it since the break. After the break in the 200 day SMA, the market found support in the low 2600’s. You can see this on the chart. At that juncture, the S&P was not yet in a bear market. It was in a sideways market. In fact, the last dominant low was in February around the low 2500’s. So long as that level held, we could consider the market in a consolidation pattern.

Along came last week. The final condition of verifying that the sideways market had turned into a phase 2 “top” looked to be in place. We saw a break of that vital February low of approximately 2540.  The break occurred on Thursday December 20th. I always count 3 days to confirm a break. Today (Monday December 24th) is d-day. Assuming no miracle, the market will likely remain below 2540. Thus, we can call it a bear market after today’s close.

What is the strategy?

In the likely scenario of a bear market, we need to sell the rallies. As noted on my Friday Bloomberg BNN appearance the markets are massively oversold. I’d be shocked if we did not see a brief rally in the coming days or weeks. That rally should be sold if it doesn’t break back above 2540. I think it will fail at or near that level. I’m going to take what I can and see if I can play the swings if the conditions for a new bear trend continue.

This market is now a traders market. Go in and out. That’s what we will be doing. Buy and hold will not work until we return to a bull trend, as indicated by the 3 factors noted at the top of this blog (higher highs, higher lows, above 200 day SMA). Read this blog for more thoughts on what type of analysis works best in a volatile market.

I will attempt to post another blog on Thursday of this week. On that blog I will address the conditions and revisit my neartermed outlook and strategy.

I will post my annual rant-blog on Monday December 31st. Each year I rant on a different subject. This years rant will be a polarized political piece. I will provide one other warning on Thursday. The rant-blog will not focus on technical analysis. It may frustrate those who don’t want to read a political piece on a technical analysis blog. Some readers may prefer to avoid reading my opinions on the subject of politics. As such, I would encourage those who would like to avoid a political opinion piece and would prefer to focus on my technical market analysis blogs to skip next Monday’s blog. I only do this once a year, and now you have been warned. I’ll warn you again this Thursday, then its your choice if you wish to read the rant next Monday.

Merry Christmas to you all and your families!