Home / How to trade the US long bond

How to trade the US long bond

Some time in the next few months, or the next few years, interest rates will begin a secular march higher. Bond performance will be severely dragged down by the capital losses incurred. However, the timing of this secular bear market for bonds will depend on the timing of the US Federals Reserve’s start date of tapering QE3 stimulus. Seeing that none of us can really tell when that might happen, it is my opinion that we should heed the charts for our bond market trading until a clear message comes from the Fed regarding their “taper-timing”.

The US T-bond, which does seem to be influencing the Canadian bond market of late, sold off aggressively from early May until last Monday — after comments by Federal Reserve Chairman Bernanke eluded to the potential of reeling in QE3 in the near future. On the daily chart, I note that last Tuesday’s bullish engulfing candle stimulated a rally for the balance of the week. Backing this rally were bullish signals from MACD, along with oversold RSI and stochastics oscillators. Note that RSI and stochastics are NOT hooking up aggressively—however, they have been diverging positively since mid-May against the TLT (see my trend lines). One would have expected stochastics, the fastest indicator of the group, to have bounced first from an oversold condition. Without more determined confirmation from RSI and stochastics, it is too early to suggest that the movement off of Tuesday’s lows was the beginning of a full-fledged rally for long treasuries. I am, however, leaning more towards the near-termed neutral to bullish camp than the return to bearish trends for bonds in the near future. 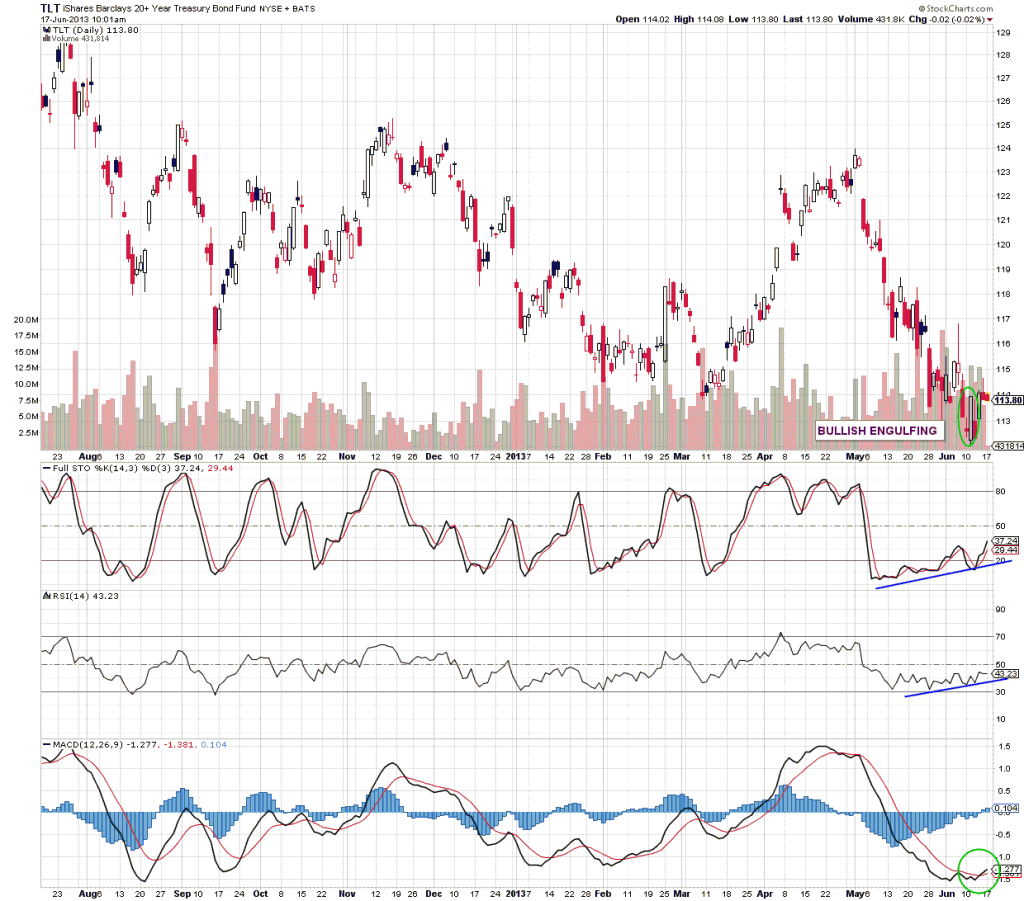 The long term chart does give some hope for a rally, as TLT attempts to bounce off of the lower trendline within a channel. Moreover, there is a seasonal tendency for bonds to perform well over the summer months. Should TLT manage to rally, look for a return to the top of its price channel – perhaps somewhere around $120. Despite the decent potential for a short termed rally on bonds from this point over the summer, the bigger picture is bearish. Given the downtrend that has been in place since around this time last year, I’m OK with a short termed trade on the US long bond, but not much more. I do not hold a position in the TLT ETF.

I was on BNN last Thursday at 6:00 pm for their MarketCall Tonight show. Here’s the clip: https://www.valuetrend.ca/?page_id=80