Home / How to play the next sector rotation

How to play the next sector rotation

This summer I was harping on – what was to me – an inevitable shift out of the “stay at home/ technology/ FAANG” names into value. As readers know, I was emphasizing value stocks and re-inflation stocks when others were trading technology. Tech stocks were, to me, stuck in an irrationally exuberant herding environment. To me, this was about as strong a contrarian sell indicator as I’ve ever seen. As we now know, the tables have turned. Value is surging, and tech/stay-at-home is flatlining.

Back in the late summer, one of our clients asked me if I thought the overinflated names like AMZN, AAPL, ZOOM, etc. would crash and burn. My answer was that they likely wouldn’t crash. This, despite PE ratios that are off the charts, and massively overbought charts. I felt that the likely scenario would be a regression to their long termed trendlines via a sideways pattern. So far, it appears that prognosis was correct.

Lets look at some of the big names that drove the SPX to new highs over the summer. You’ll notice that they all have one thing in common: totally flat performance since their mid summer highs. I’ll cover the FAANGs and then a couple of other popular names from the summers madness:

Google had slightly better performance than the above FAANG members, but still: pretty much flat.

OK…what about some of the other stay-at-home stocks?

How to trade this rotation

Its clear from the above charts that the “stay-at-home/ tech/ FAANG” trade has stalled, as expected. But that doesn’t mean these names are down and out forever. Unlike the tech stocks of the late 1990’s, these stocks actually  have earnings and future growth prospects. As a contrarian investor, I have seen this pattern so many times during my 30+ years in the business that it makes my head spin. But, like all overbought/ overvalued situations, there comes a time where that excess is washed out. The fact that these names are NOT crashing to work off that excess suggests that in time, it will be appropriate to rotate back OUT of value and INTO technology, etc.

So how do we know when that time comes? To answer that question, I’ll revisit the AMZN chart. Really, you could substitute any of the above charts and make the same assumptions that I’ll apply to AMZN. But AMZN is the poster boy for the group, so I chose it as my example. This time, I’ll add some indicators to paint a trading picture: 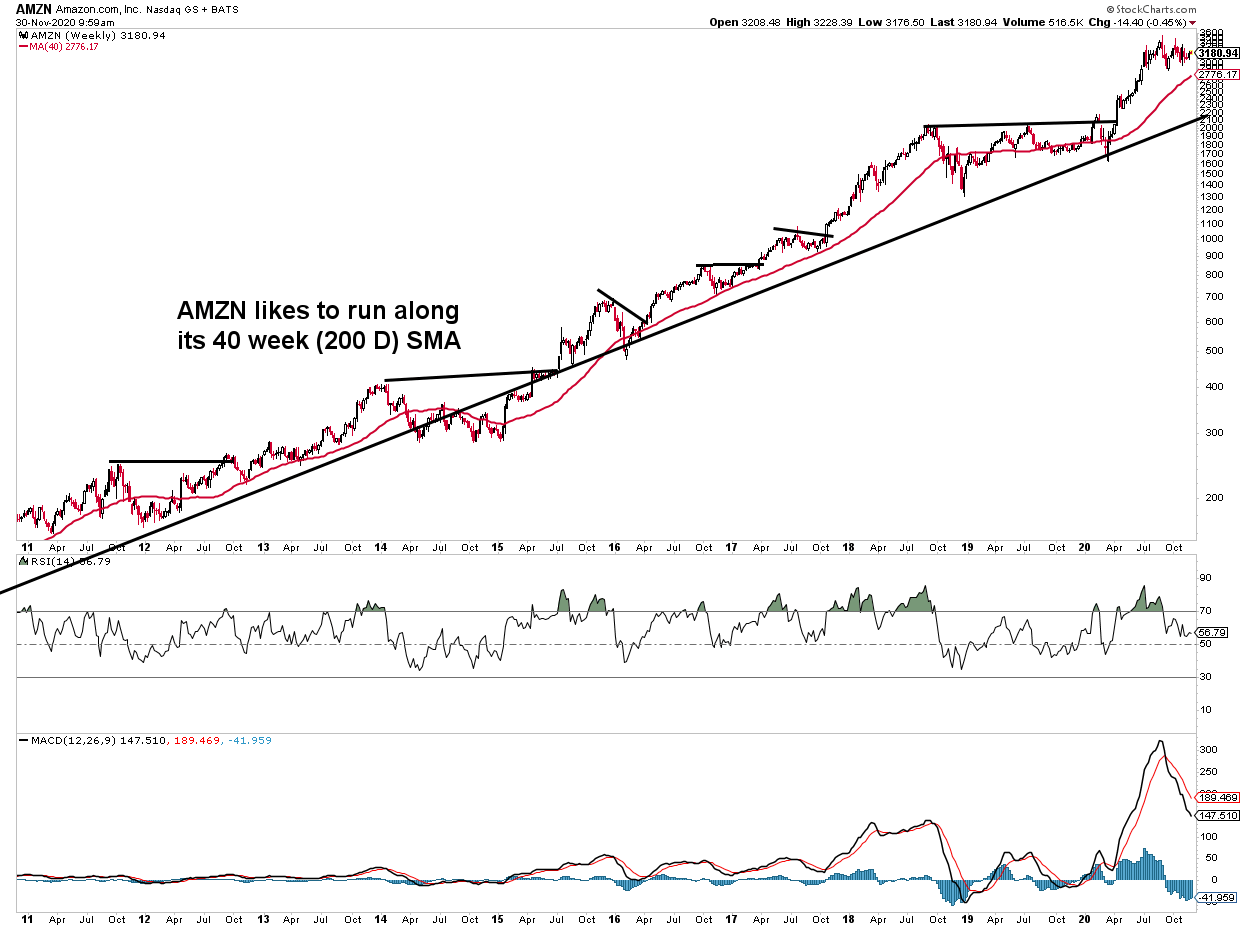 You’ll note on the chart that after this stock goes parabolic while displaying a massive overbought signal on RSI and MACD as it did this summer, it settles into a correction or sideways period. This time it looks to be in a sideways period rather than a correction. During that period, you will note that RSI returns to the mid point or lower of its range. You’ll note that MACD completes its steep decline and hooks up at the end of the corrective cycle. And you’ll note – most importantly – that the stock will get closer to its long termed trendline (black line on chart) and its 40 week/ 200 day Simple Moving Average (SMA). That’s the red line on the chart. This stock (as with the others) will indicate that the “regression” period of returning to its mean/average performance when it nears that trendline OR if it finds support at the 200 day SMA. Note the parabolic move of 2018, followed by the extended flat period over 2019. The stock ran along its moving average without a clear move back into its uptrend until it touched the long termed trendline.

The safer bet for re-entering this stock, and the other names, is not to assume a touch of the 200 day (40 week) SMA will signal the end of the current flat period. Instead, I will be looking for confirmation of RSI/ MACD coinciding with a test of either the moving average or trendline – with a preference towards seeing the trendline tested. Still, that remains to be seen as the best option. All I can tell you now is that we are NOT buying into this group yet. The consolidation hasn’t ended yet.

I’ve noted some dramatic changes in some sentiment indicators. Last week saw clear sell signals coming from a number of them. While we’ve seen a bit of negativity on the markets in the past couple of days to erase some of this excessive optimism, I wonder if there has been enough excess washed out to signal a lower risk environment again. As such… I am looking forward to reviewing the Bear-o-meter results tomorrow.  I tend to do these readings in the first few days of each month. Stay tuned for this one. It might – or might not- offer a new perspective since last months positive reading.