Home / How to avoid the next market crash

How to avoid the next market crash

Tonight, I will be “debating” seasonal expert Brooke Thackray on a Canada-wide Zoom conference hosted by the CSTA (Canadian Society of Technical
Analysts. Truthfully, we see pretty similarly, so its going to be more of a discussion with biases towards differing analytical tools- but call it what you wish, I believe you are in for a great discussion on dealing with todays overbought, overvalued, and bubbly investment climate. It’s happening at 7:00PM EST tonight (May 12th), and you can register here . Please join in on the discussion – you will be allowed to post questions – now’s your chance to get the low-down on investment questions you might have.

I was asked to open the conference by relaying a story about an influencing lesson that I learned during the 2001 technology bubble and bust. There were some similarities between the look of the charts those days and the look of the charts today. While I don’t want to get too deep into what’s to be discussed tonight, I wanted to present the chart that I will open the discussion with. Hopefully it stokes your curiosity enough to want to hear the rest of the discussion tonight!

In the late 1990’s, I was very, very fortunate to have met, and learned from two brilliant Technical Analysts of their time when working as an Advisor and studying Technical Analyst with Merrill Lynch Canada. One analyst was a gentleman named Gurney Watson, who was with the Canadian side of Merrill Lynch. Gurney was a mathematical anomaly. He understood the markets from both a traditional perspective AND from a “geometric” perspective, as he liked to put it. Gurney was the first Technical Analyst to introduce me to the “Smart Money/ Dumb Money” concept of contrarian investing.  I cover his particular interpretation of this indicator in one of the chapters in my upcoming book (due in late June) “Smart Money, Dumb Money: Beating the crowd through contrarian investing”.

Without going into that specific analytical tool, in 1999 Gurney presented some bearish evidence using sentiment indicators like the Smart/Dumb” indicator, along with some interesting log-chart adjustments of the broad US stock indices. He told me on the phone one day that “The market has a geometric problem, not an arithmetic problem”. What he was referring to was the angle of the chart. He was the original analyst to influence me in that methodology of measuring market movements by angle of ascent – and compare that angle to past moves in order to determine if markets were becoming parabolic.

The chart below illustrates that the market had been moving at roughly a 45 degree angle (relative to the time/price scale) until about 1998 – see the green trendline on the NASDAQ chart below. Beginning in 1998, the market arced off of its 20-year trendline in a parabolic move. I recall in 1999 that Gurney wrote a report, saying something like “The hour is late, partyers are growing tired. There’s probably only time for one last drink before the party is forced to end”

At the same time, I was reading reports from Merrill Lynch USA-based Technical Analyst and NASDAQ specialist Don Kapetanakis (say his last name 3 times fast!). Don is now an Investment Advisor.  Don wrote a report in or around 1999 stating that he saw, like Gurney Watson, that the NASDAQ was overbought, overvalued and ready to blow. I believe he was looking at similar chart angles to Gurney, along with other overbought technical indicators in his toolbox.

On the chart below I note approximately where I believe Don wrote that report. NASDAQ was primed for a major (not a minor) pullback. I recall the NASDAQ was somewhere around 3000 – although he wrote further bearish reports as it moved into the 4000 range. After he wrote the first report, the NASDAQ went on to hit 5000. Don, and Gurney, it appeared, were wrong! In fact, as a retail Advisor at the time, there was much criticism aimed towards Don (in particular) as his prediction proved “wrong”–this, after Advisors and clients watched the index climb substantially higher. Some Advisors were talking trash about Don’s call, saying “Man, I am glad I didn’t listen to that guy!”

What a difference a year makes. After surging to 5000 after Don and Gurney’s original bearish call…the NASDAQ turned-tail and retreated! It fell … wait for it…darned close to 1300! So – Don said sell at 3000 (and 4000).  Then the market went up a whole bunch. But then…. it went down. Indeed, the NASDAQ settled in darned near 1/3rd of the price when Don originally said to get out. 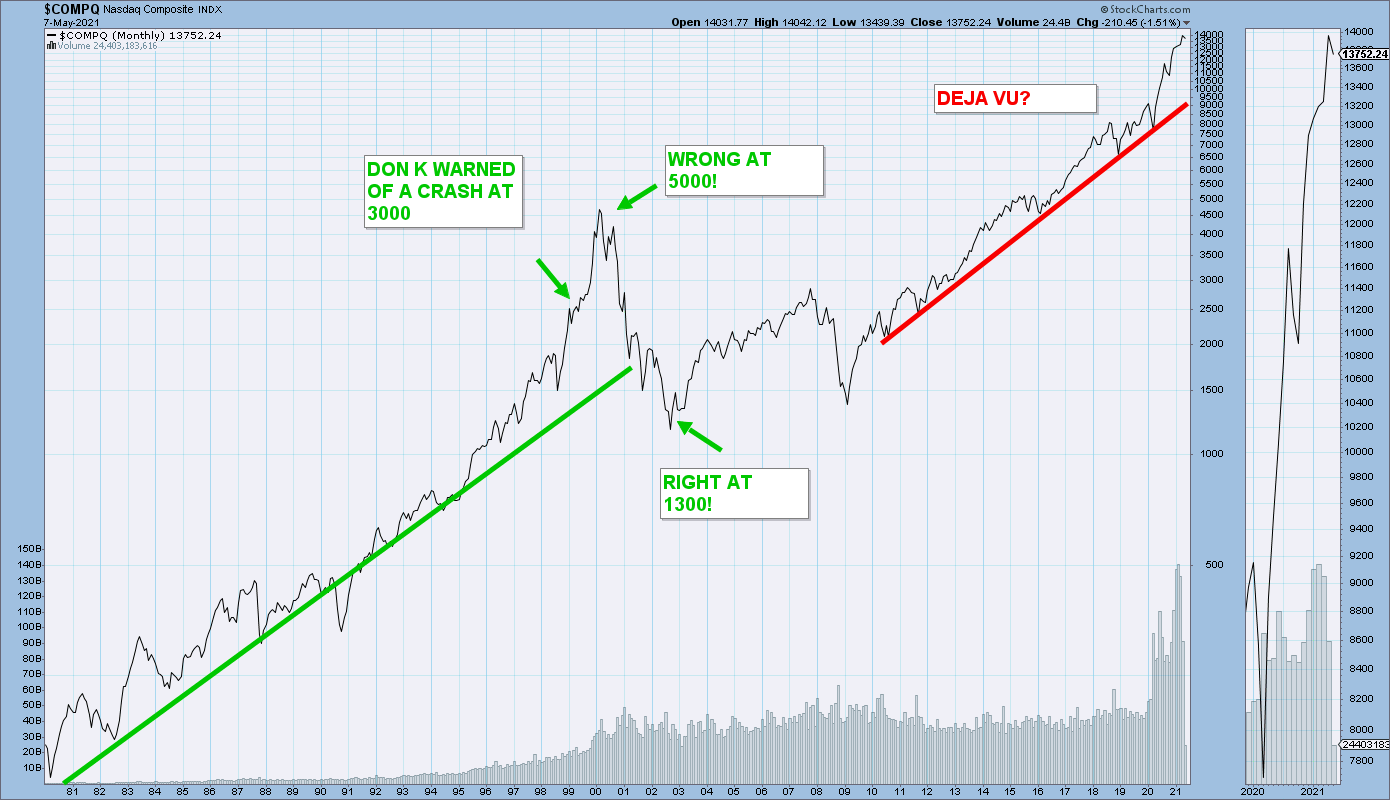 So… Were Don and Gurney right? Or were they wrong? Well, hindsight tells us now that they were very wrong for a year, then very, very right for almost 2 years. Net-net, listening to Gurney and Don’s advice in 1999 was painful at first, but profitable in the longer run. But of course, people are myopic. Many will not recall Don and Gurney making the right call with a “better early than never” level of accuracy. But I do!

The interesting thing I learned from all of this is that its hard to make timing predictions based on signs of an overbought, overvalued market. The analysis might be correct…but, as Keynes once said, “The market can remain wrong longer than you can remain solvent!”. Gurney and Don’s analysis taught me to respect the forward looking indicators like sentiment indicators, chart angles, market momentum, volume and market breadth. But their early call(s) taught me to include a methodology that will keep us in the market, despite the “wrongness” of its overbought status, until the trend breaks.

At this moment in time, I am starting to see many of the signs in today’s markets that I am sure inspired Gurney and Don to put on their bearish hats in 1999. To that end, I do hope you will join Brooke and I tonight to discuss how we can stay with the current market, even in a potential bubble-environment, for the longest stretch possible, and avoid exiting too early. This, while maintaining a logical, systematic exit strategy to get us out with maximum profits and minimum damages. Be there, or be square, as is said.