Home / How much upside has Helicopter Ben given stock markets?

How much upside has Helicopter Ben given stock markets?

We now know that the Fed introduced a huge QE3 plan last Thursday. Rather than discuss the merits of doing “more of the same thing that didn’t work the first two times to solve our economic problems”, let’s look at how the markets have reacted to past QE stimulation, and may react to the current program.

The positive impact of a QE program on stock prices is indisputable. When QE1 was introduced, the S&P 500 rebounded about 70% from its March 2009 lows. QE2 saw the S&P rise about 30% from the August 2010 lows. Operation Twist, which was implemented last fall, gave the S&P a 25% rise from its lows of 1125 to this spring’s highs of 1420. The lead-in to the current QE3 program has already resulted in a double-digit gain from June of this year. The question is: will the market continue on a strong path, and if so– for how long?

The chart above is one that I’ve posted on this site in the past. Note that the “law of diminishing effects” seems to have taken place over each QE program. Stock markets rallied for about 13 months thanks to QE1 (March 2009 – April 2010), then for 10 months thanks to QE2 (June 2010 – April 2011) , and 6 months thanks to Operation Twist (October 2010 – April 2012). Each rally has produced gains over a shorter period. The one difference here is the open-ended nature of QE3 – in that it (theoretically) can continue indefinitely under the guidance of the Fed.

I often relay to investors that it’s never wise to “fight the Fed”. With QE3 in place, markets will rise. The initial excitement of the program may drive things up for a few more months – or perhaps only a few more weeks, who knows? For now, I will maintain, and even add to my equity holdings. I will, however, maintain a sharp eye on the technical trends for any sign of an end to this party.

Very near term, the momentum indicators are overbought in a big way. Plus, the weakest weeks from a seasonal investment perspective are here (mid September to mid October). So there may be a correction shortly – albeit a shallow one given the effects of QE going forward.

The global market continues to display trends of weakening growth, which implies that, if not for the QE programs in North America and Europe, markets might be moving into a new bear market. Risks beyond the coming weeks or months may include the election of a Republican President (which would possibly kibosh the current QE program, given Romney’s potential to replace Bernanke). Another risk may be a return to reality after the current euphoria surrounding QE3 and its equivalent European balance-sheet expanding programs wears off.

For now, enjoy the party. 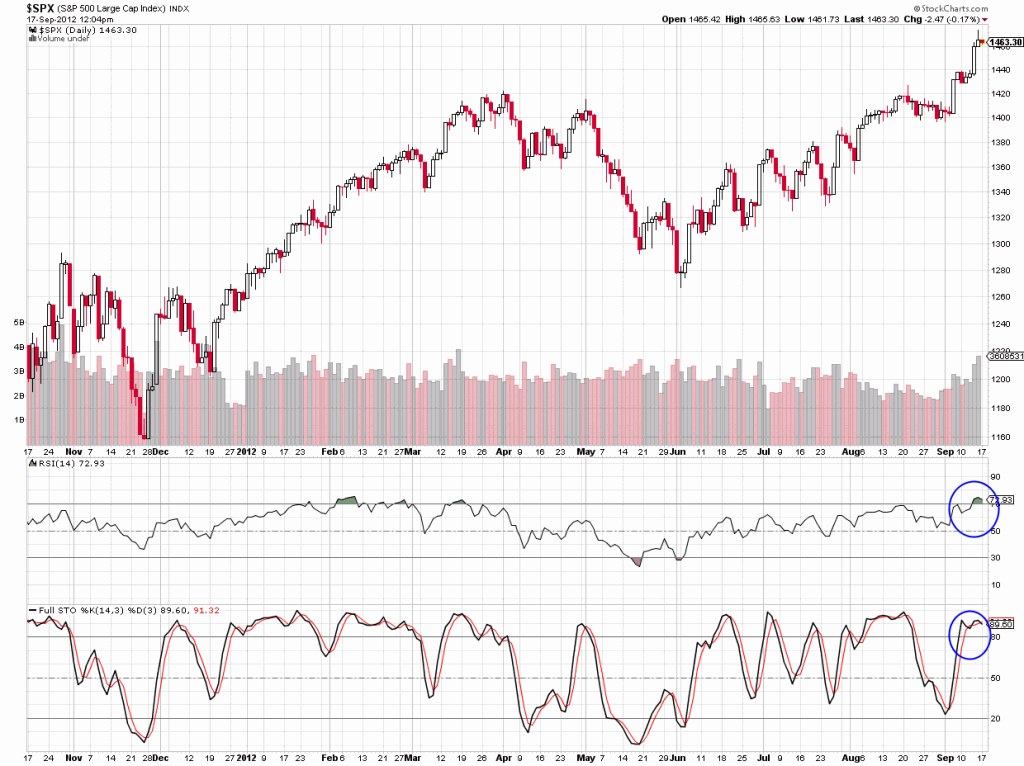