On Sunday evening, after observing a market high last week, I wrote this blog explaining that I felt the US market in particular is near-termed overbought, and in the bubble phase of the bigger-picture mega-cycle. Today I am not surprised to see the pullback.  I noted such a pullback was eminent on Sunday’s blog – and now it has begun. But how low can it go? Today’s blog will attempt to answer that question. Of note: I mentioned that we had raised about 10% cash in our equity models last week and had been moving into lower volatility sectors. This week we moved to a little more cash, and are monitoring the situation based on the points I will cover below.

Before getting into the neartermed correction strategy we are looking at, I would like to note that the bigger picture “Bubble top” will probably not set in until the US Fed announces an aggressive tapering of stimulation (monetary and / or fiscal). As such, we should listen to the language of the Fed releases in June or at the Jackson Hole meeting in August of this summer. These meetings may offer clues to the direction of stimulatory policy into 2022. In a nutshell, you don’t want to hear about aggressive tapering. Should that occur, it would almost assure a major bear market. I’d expect that is the last thing Biden wants to begin his presidency, so the odds are good for gradual tapering instead.  Whatever the case, we need to be cognizant of the markets reactions to the hints that the Fed will no doubt drop this summer.

Back to our main topic…how low will the current correction potentially go?

Lets start with traditional technical analysis. Then, we can look at some sentiment tools to get a feel for market rationality/ irrationality.

Here’s the S&P 500 with my short termed timing layout on a daily SPX chart. Note in past instances where RSI and stochastics reach overbought and round over with an upper BB touch, we get some sort of correction (large, or small). I placed vertical lines on the chart on those occasions. We are there now. Note that on my last blog you could identify the mid termed overbought status via the weekly chart I posted. That, and the all-important % over the 200 day moving average. 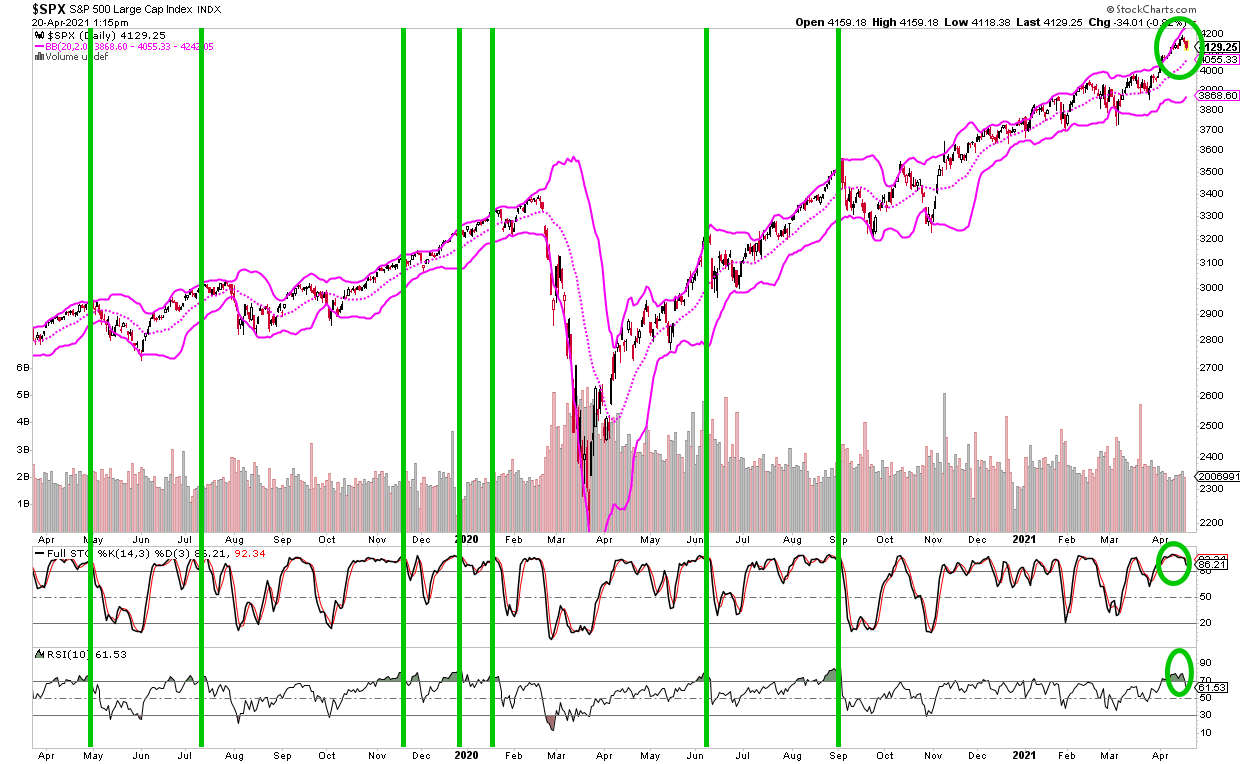 I wont post illustrations of the various sentiment indicators I use (I do that once a month with the Bear-o-meter reading). But I will note that the VIX went to a low enough point to suggest complacency, but not deep enough to issue a major sell signal last week. In my research, I have noted that 20 is a minor sell signal, while 12 is a serious sell signal. We breached 20 last week, but not by much. The VIX is a loooooong outlook indicator, its not always super reactive to imply immediate trades, but it indicated a setup for a correction recently. Here’s the chart: 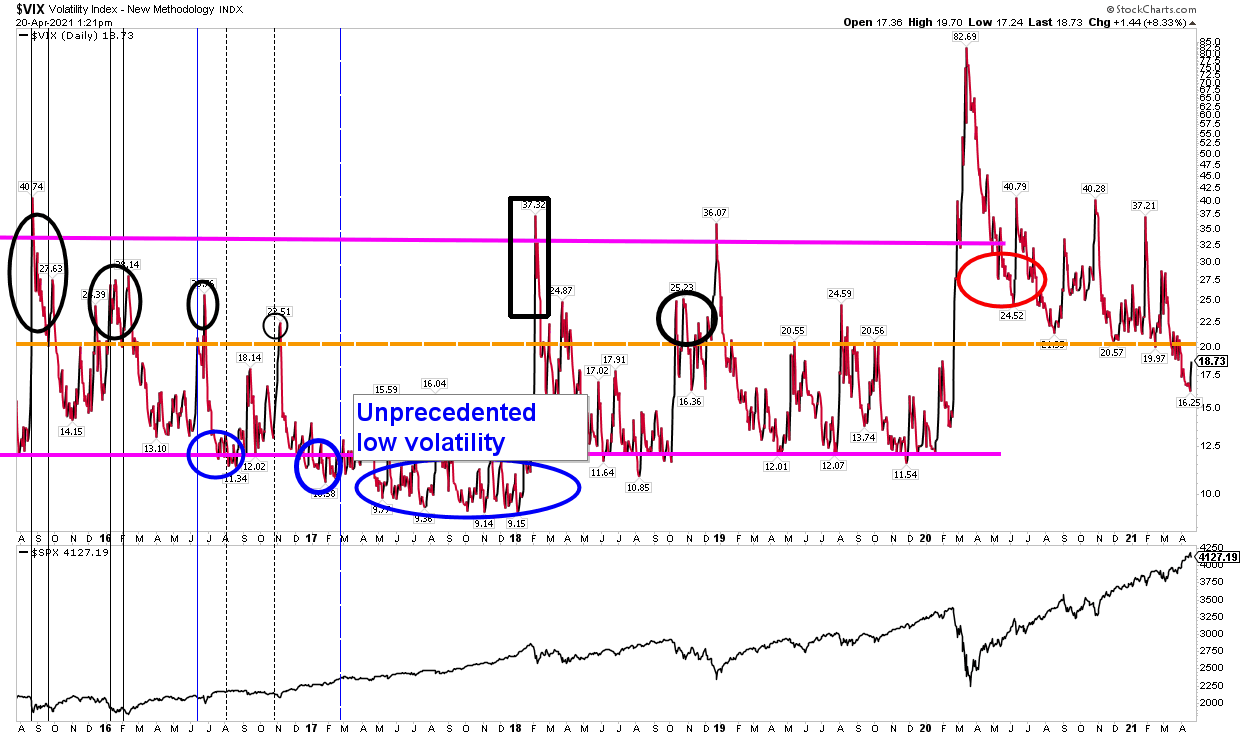 Below is the % of market shorts vs US market float (source: BearTraps). I’ve circled when that level drops meaningfully below 2%. Note the correction of summer 2015 and the correction of December 2018 was headed by such low’s in shorts. Like the VIX, this is a longer outlook indicator that doesn’t always give up to the minute sell signals. We are at a lower point than either of those occasions at this juncture- indicating a setup for a correction. 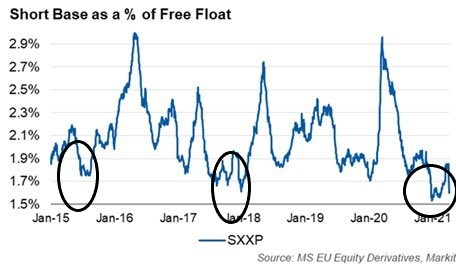 So where will the SPX land?

Everything I look at suggests a minor, not major correction for the US markets (although the NASDAQ is more vulnerable due to its underperformance of late and high beta exposure). Its for that reason that we are sitting near 12% cash right now – along with low-volatility stocks. But we are not selling aggressively. My target, based on past corrections bringing the SPX to or within a few % above the 200 day SMA, suggests a correction of perhaps 3800 to a maximum of 3600. The SPX sits at 4125, the 40 week (200 day) MA sits around 3650. You will note on the chart that large corrections like 2018 and 2020 pushed the market through that MA. However, most minor corrections (of which I believe this one will be) came down to the MA, or stayed above it.

Final note: on the budget

I won’t spend any time opining on the recent Fed budget–lots of that is available online. The best commentary I have seen was by Diane Francis (very worth reading) – you can read her thoughts on this link.

For my take, this cartoon pretty much spells it all out (National Post): 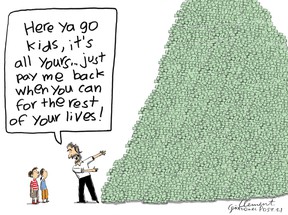