Home / History may show us when to buy oil

History may show us when to buy oil 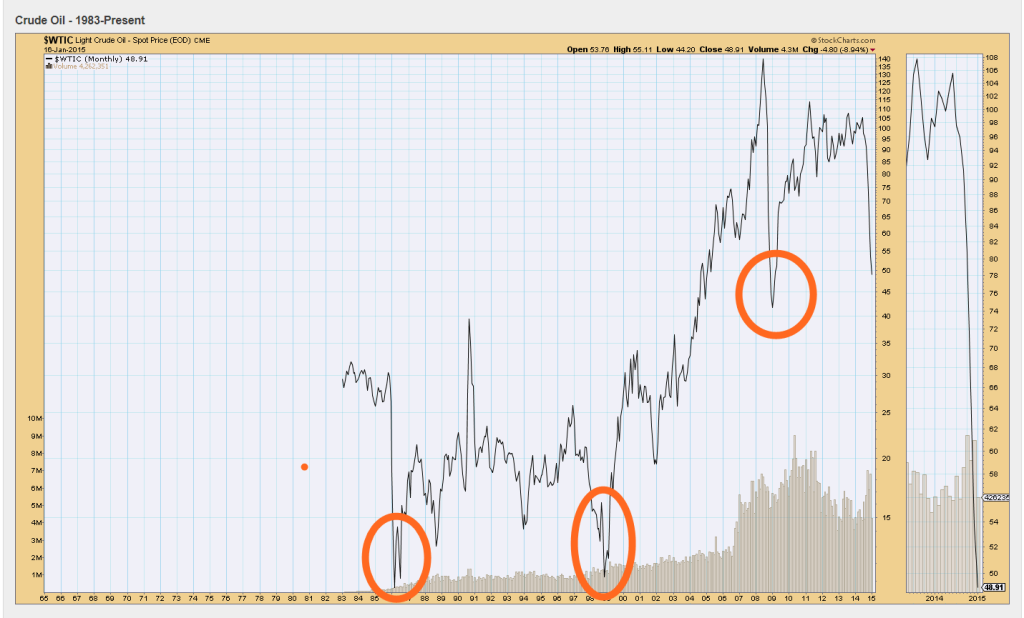 My apologies for not posting a blog earlier this week. I am on a “working vacation”—meaning that I am enjoying some “sun and fun” bike training in Florida, but trying to get a little work in here and there between bike rides. I am back next week for the usual routine.

Oil is likely presenting a screaming buy opportunity shortly. I’m sure that many readers are of the same opinion – the only question is timing the buy point. Today I will look at the historical chart of crude—going back to the crash in the mid-80’s and the crash in the late 90’s – as well as the recent 2008 crash.

Oil producers by the dozen folded tent, and a complex process of bottoming occurred as oil formed a double bottom through 1987.

The years 1998-99 saw another near-$10 / barrel test of oil prices during the “Asian Contagion”. Oil was finding support at the prior decade’s low point. I was a stockbroker with Merrill Lynch at the time, and I recall the default by Russia on its bonds, and the near collapse of its economy (again, sound like a familiar setup?). Oil had reached a peak in 1990 of nearly $40, before consolidating in the low-20’s for nearly a decade. As a younger broker, I recall wondering if I should buy oil in the $12 during the 1998-99 collapse. I didn’t, but I did learn an interesting lesson by observing the bottoming process. Although the chart below is only a line chart, you will note that the bottom took a good 2 years to complete its process through a series of volatile moves. Like the drop in late 1980’s, this was a complex bottom.

The drop in oil prices from their peak of $140 to around $40/barrel looks fairly v-shaped on this longer termed chart. Take a look at the shorter termed chart below for a better view of the volatility surrounding oils turnaround in 2009. The bottoming process took the entire winter of 2008-9, well into the spring of 2009. I don’t care what formation you wish to call that period of basing (head and shoulders bottom, perhaps?)- but I do care to note that it was complex and volatile. And that it took place over many months – just as the last two oil collapse bottoms did. I am happy to say that I learned my lessons from missing the 1999 drop – I bought oil during the spring of 2009 in the mid-high $40’s.

My thoughts regarding the timing of an oil trade: If prices of this commodity act as they did in prior collapses, we may test the 2008 lows (a few dollars away yet) before beginning a complex bottom. I do feel that we are very close to the lows (weeks away?). Perhaps we have already seen the current selloff’s low, but history suggests we may be in for one last run lower. Either way– Such a bottoming process will likely take place over many months. I will possibly nibble at buying through the basing process, but the safest way to buy oil and the oil producers will be to await a neckline break after a consolidation. That occurrence, which is where I will do the majority of my buying,  may be several months away from this juncture.