Every month I publish my Bear-o-meter risk/reward compilation reading. This is a quantitative points-based measurement of key factors for value, trend, market breadth, market sentiment, seasonality, and breadth momentum. The method to do your own Bear-o-meter compilation calculation has been revealed in my latest book Smart Money, Dumb Money. The Bear-o-meter reads on a scale of 0-8, where 0 is “high risk” and 8 is “back up the truck and load up with stocks”. For the past number of months, the meter has hovered between minor risk (2-3) to neutral (3-5) readings. But now – we have an all-hands on deck reading of “0”. Today I will discuss how we got that reading, and what we should consider doing about it.

I won’t print all of the charts for all of the factors in the meter, but a few stand out. The first in line is the VIX. Two things to note. First, note where I circled the reading from last month. It was at a high level (over 32.5) which put it in “bullish / high investor fear mode. High VIX means high fear, which means a contrarian buy signal. Now, the VIX is in neutral territory around 23. But the other thing to note is the general trend of the VIX, which is rising. Note my green trend lines for the VIX tend to correspond with an opposing trenline for the SPX below. This is known as negative co-relation. Its a bad thing when the VIX is trending up. 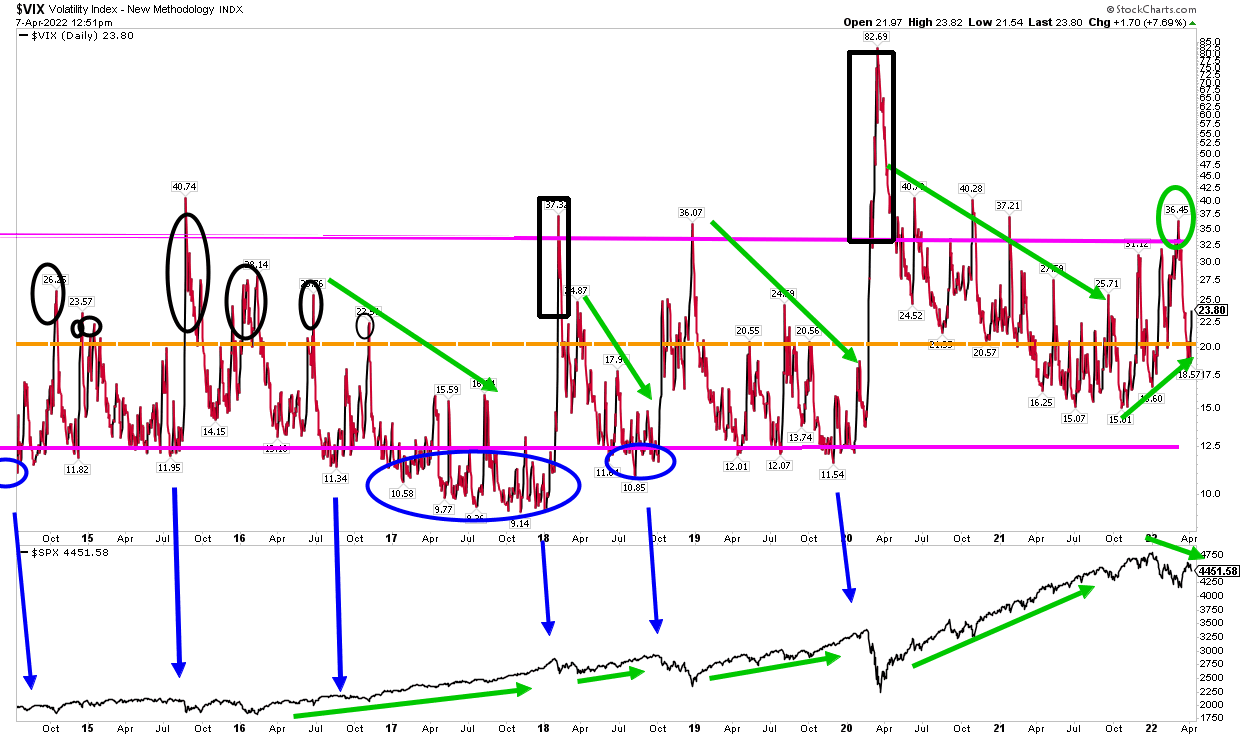 Next, we should note that the SPX is below its two key trend indicators I use in the Bear-o-meter. The most significant of these is the 200 day (40 week) SMA. The other is the 50 day SMA. The chart below illustrates this break (red line is 40-week, blue line is 10-week).

Also – we should pay attention to price action. Note that the prior low was taken out about a month ago. The SPX recovered to just marginally above the last high (which was a lower high).  Some evidence may be presenting itself that we have a lower low (this is confirmed) and a lower high – which will be confirmed if the market does not turn back up and move over the 40-week SMA in the next week or so. So the setup is for a bearish trend, although I will not proclaim it as such if we see a revival over the 40-week SMA next week. Stay tuned!

Finally, I will note that many of the sentiment indicators, like the VIX reading noted at the top of todays blog, have moved from “fear” to “neutral”. While neutral is not bearish, its still a negative for the meter. That’s because the fear readings of last month gave the meter a point here and there. Now, the indicators are awarding “0” points as they move to neutral. Sentiment is not providing an edge – making the bearish breadth and trend indicators prominent in the meter.

Here’s the Smart Money/Dumb Money indicator as one example (www.sentimentrader.com). Its moved from a fear reading last month to neutral. Note how Dumb $ (red line) was deeply fearful – near the bottom of the chart last month. Meanwhile, Smart money (blue line) was supremely confident last month. Now, we have Dumb money rising in confidence while Smart $ is becoming more concerned. This week, they met in the middle with equally neutral confidence. Again – not a bearish sign by itself, but you certainly don’t get that bullish edge we got last month- which happened just before the market moved from 4300 to 4700+. 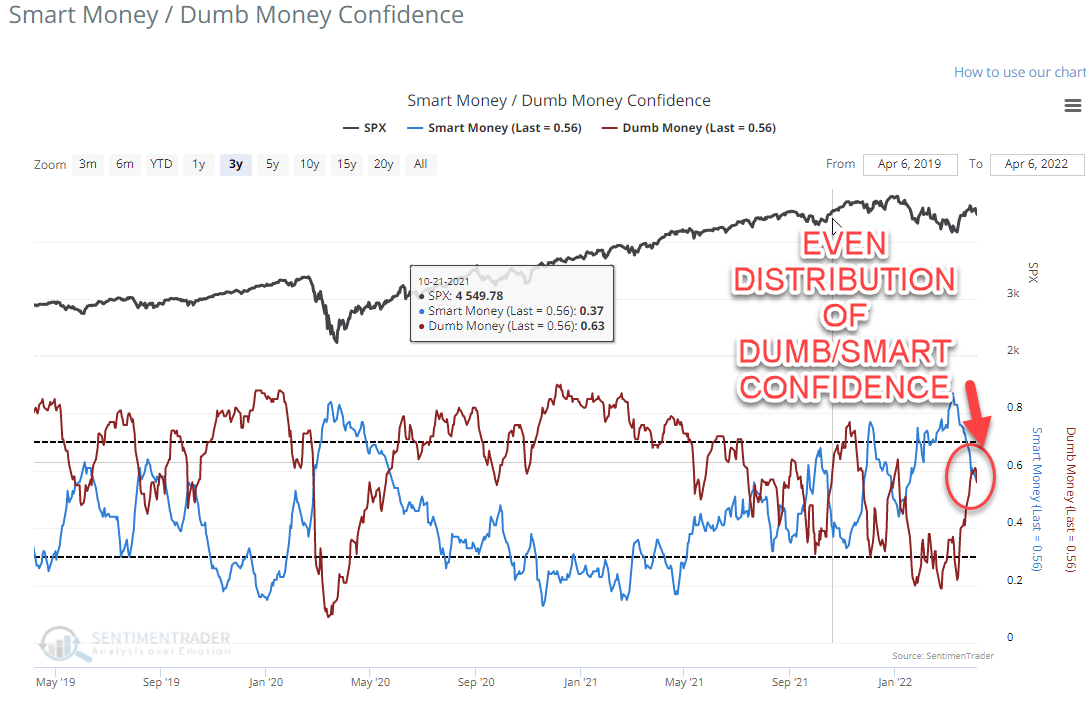 Ladies and gentlemen. If you took my Technical Analysis Course, you know that we are starting to see early signs of a risky market, given the above factors. As we approach the end of the bullish seasonal period, the risk could elevate. You know that its possibly time to raise cash and lower beta. But you are not going to jump to forgone conclusions, either. You know that you should leg out, rather than panic and run. Anything can happen, and things might change. You are agile.  You are not thematic in your trading plan. You follow your rules, and act in a logical, unemotional sequence of steps. At least, I hope you do.

ValueTrend is starting to reduce our exposure to beta right now, albeit at a measured pace. You need to decide how you will approach the signs noted above.