High potential for a short termed correction in the coming weeks

The S&P 500 (along with most world indices) had a marvelous finish to the year. The trend remains as strong as ever, but I’m seeing enough evidence to suggest that now’s the time to start looking for  a pullback. Unless we witness a break in trend, we should anticipate using such a pullback to add new positions if we have cash, or do some swapping of stocks and sectors into those with better potential. Today, we’ll look at the chart of the SPX and note my reasoning behind the potential for a pullback. Then we’ll briefly touch on some thoughts as to what we should be expecting in the markets, and how to best position our portfolios given those thoughts.

To start, here’s the SPX chart going back to the start of the uptrend after the COVID crash in 2020. Note the wider price channel (bigger swings), followed by the tighter price channel (smaller swings) of late. The swings from May 2020 to may 2021 were often in the range of 10%- as indicated with my % retracement measurements. Since May of 2021, the swings have been about half of that. Right now, we are at the top of the current price channel. A swing to the bottom of the channel might project a correction of about 5.5%- as I’ve indicated on the chart. That’s around 4600-ish. This is a daily chart, so the stochastics and RSI oscillators are more sensitive to small overbought/oversold signals. Stochastics suggests a near termed overbought level. RSI is not overbought. However, you’ll note its divergence against the greater trend is bearish. 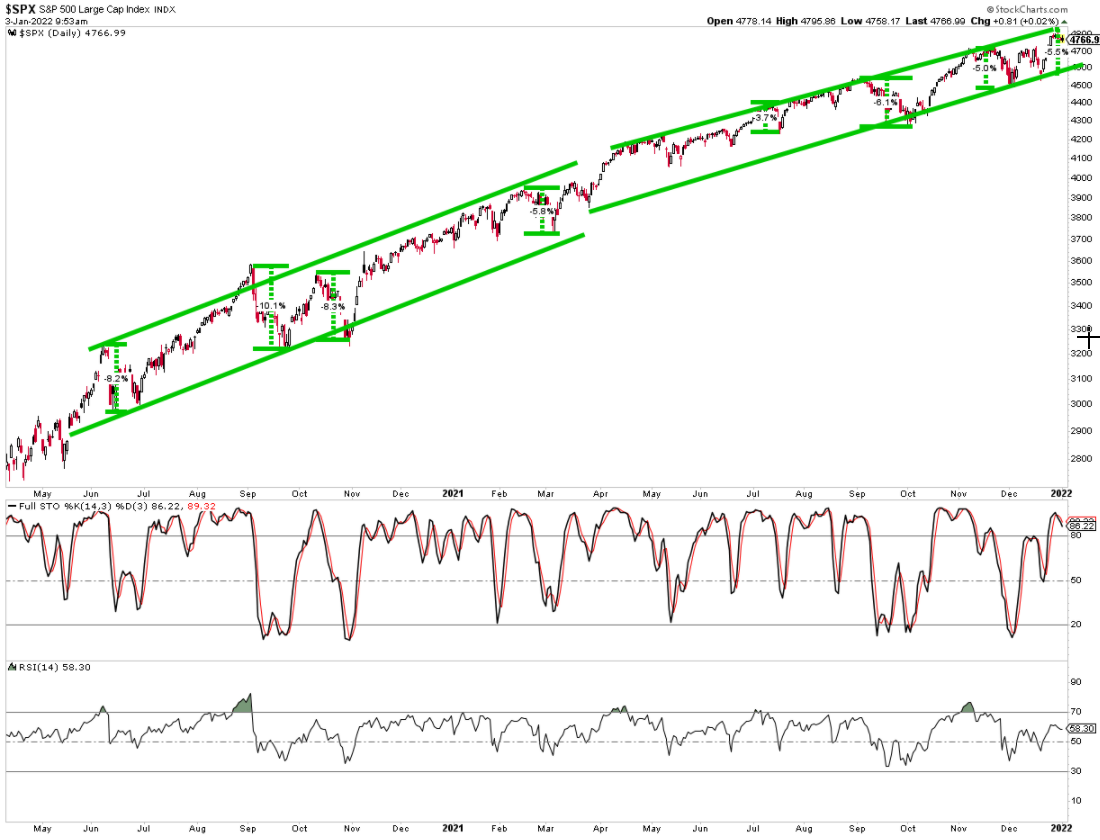 Seasonal trends also suggest the potential for a correction in January. Despite the fact that we’re in the “best 6 months” for the market, we can get nasty swings in January and February. The chart below from Equity Clock has my notations illustrating seasonal weakness in mid January, followed by an uptick, and then a second period of weakness from late February – mid-March. This can followed by a period of uber-outperformance leading into the flat May to October tendencies. So, the seasonal tendencies for late January might agree with my observations regarding the market being near the top of the price channel – noted above. 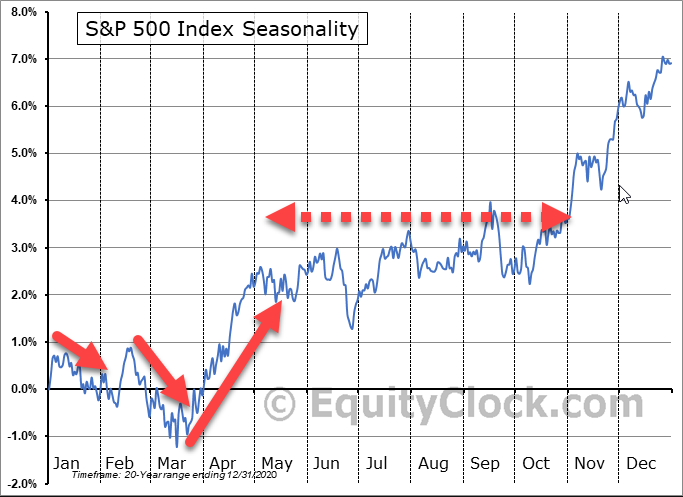 Some analysts suggest that valuations can compress during the bull market’s mid-cycle. Morgan Stanley notes (as have I on this blog) – the 15 largest companies on the S&P 500 represent 40% of  its valuation. And its been those stocks that have kept the index pushing ahead. The problem with that, of course, is that the valuations of these select stocks are getting ahead of themselves. Specifically, if you review the very largest 7 of these top holdings (AAPL, MSFT, TSLA, GOOG & GOOGL, NVDA FB) you will note that they are all in one sector – technology. And they ain’t cheap by historic standards. Not to mention that rising rates are not so great for these stocks.

Given the parabolic angle of the SPX, and knowing that a handful of high valuation rate-sensitive stocks have driven the index to that angle, it might be wise to consider avoiding too much exposure to the above names.  We might instead overweight overlooked sectors and stocks in our portfolios. The chart below, which I have posted before, shows us just how steeply angled the angel of ascent is right now. Every time this happens, you get a significant correction or crash. But, it ain’t over until the fat lady sings (as sportscaster Ralph Carpenter famously said). As I’ve noted before, a key sign of the “big one” coming has been a defined peak and sharp hook by my mega long termed ROC (60-month average) shows us. We are not there yet. 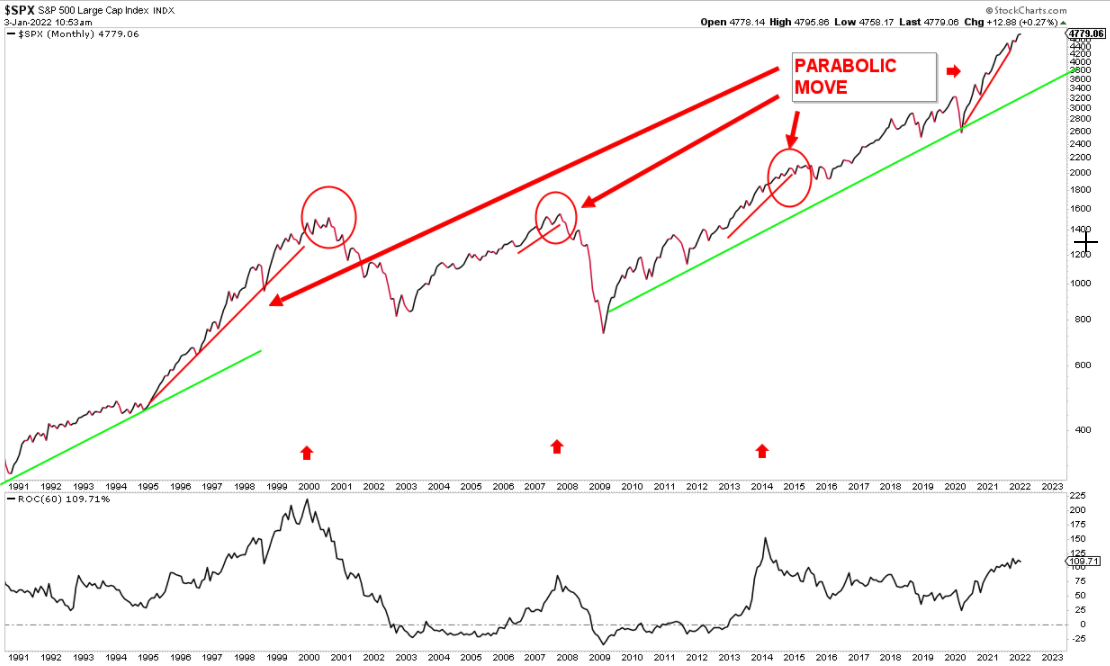 While these are not specific recommendations, I might offer some hunting grounds when looking for rotational candidates. For example, international markets, with a particular focus on Emerging Markets, have been in the doghouse. This includes China and Brazil (we hold a Brazil ETF). You already know that I like cyclicals (commodities) given ValueTrend’s big-picture inflation outlook. We also like small caps here. Mid caps might also provide some hunting grounds for your portfolio. These are areas that have not performed along with the nifty-15. And that’s why they might be the next sectors to move.

I’m happy to announce that my Technical Analysis Course will be up and running in a few days. Blog readers will receive a limited time discount that will expire in February to buy the course. Details to come later this week. 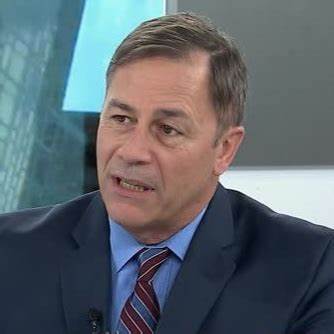