Home / Have your cake & eat it too in an overbought market

Have your cake & eat it too in an overbought market 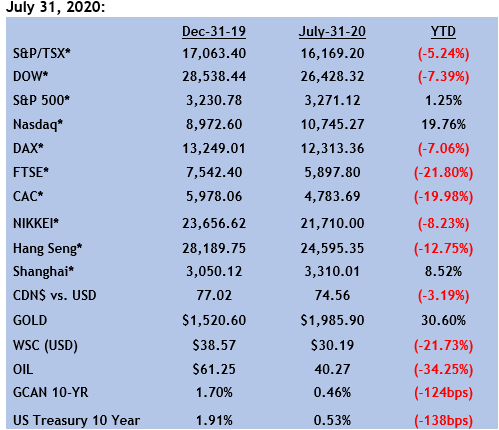 Above is the YTD performance numbers (end July 2020) for most of the major indices, courtesy Invesco. The equity market standouts are the SPX, the NASDAQ, and Shanghai. Gold has been the biggest mover of the non-equity categories. One might wonder why the Dow Industrial Index had such a negative return in light of the marginally positive return on the SPX. The answer, of course, lies in the capitalization of the SPX. 5 stocks make up over 20% of the returns on that index. They are:

The NASDAQ has had a stellar return this year. Its original mandate was to focus on technology stocks, with some diversification into sectors like biotech. Its top 5 stocks make up over 40% of the returns on that index:

Notice anything similar here? It would appear that the S&P 500 is less of a diversified market indicator than many think. The SPX is effectively the NASDAQ’s kid brother – a tech-focused index. In other words, it is pretty sector and stock concentrated – thus able to outperform when that group rises, and under-perform if that group declines. But is it a good indicator of the portfolio of the average stock investor?

More evidence of sector concentration can be seen in the SPX equal weight index vs. the “regular” SPX chart below. Note the out performance by the SPX (red line) vs. the equal weighted index (black line). The pane below the price chart is comparative relative strength between the two indices. You can see that the two had been diverging (SPX beating the equal weight index) since 2017. Still, the negative performance correlation between these indices was less aggressive up until earlier this year. As of 2020, the relative strength line fell out of bed…hard! That’s because of the massive movement into the above 5 stocks, and a few others. It is my contention that most stock investors might more closely resemble the performance of the equal weight index than the “regular” SPX. Who but the biggest risk takers hold the majority of their portfolio in 5 single-sector stocks? 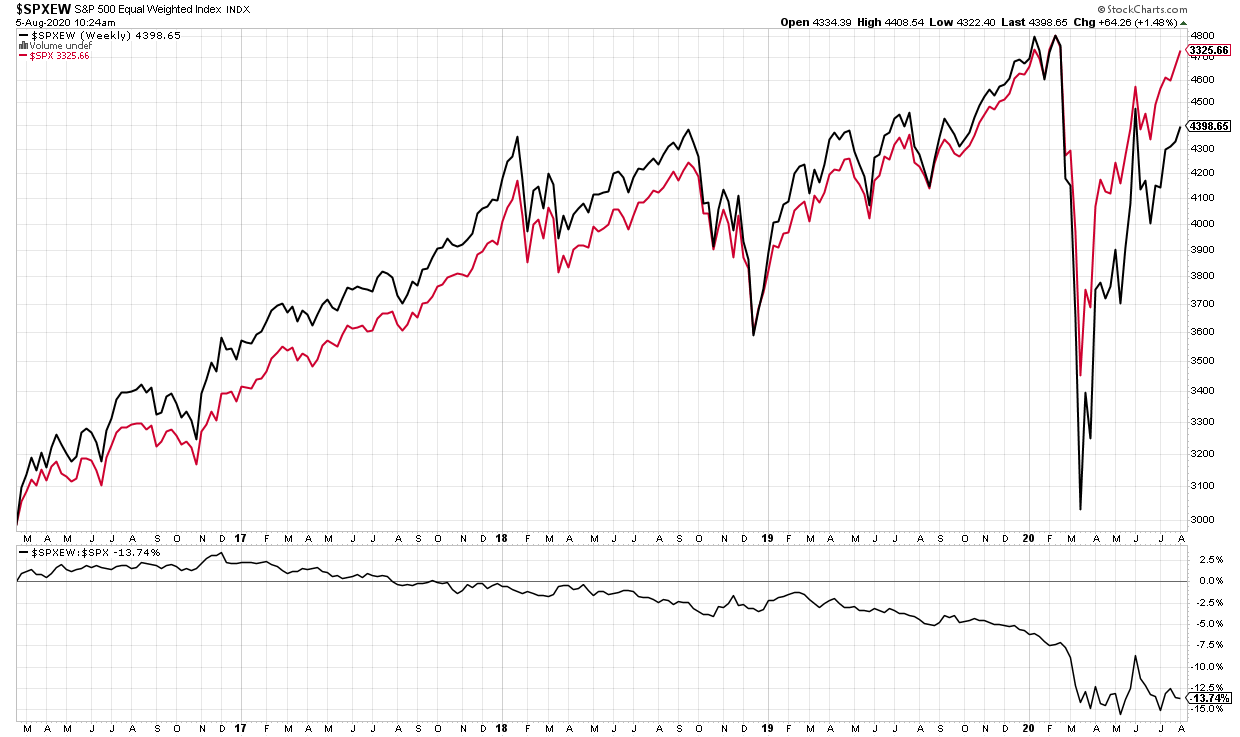 Has this index concentration ever happened before? Well, sort of. In 1999 – a year before the start of the tech-bubble implosion, the S&P 500 had a rather silly weighting within its top 3 stocks. They were:

Microsoft (19%), GE (16%), Cisco (12%). That’s about 47% of the index in 3 stocks! Oil had a decent weighting int he index as well, but other big technology weightings further influenced the index. Intel, Lucent and AOL were up near the top in weightings. Click here to see an interesting history of every year on the index, some trivia notes, and its cap weightings.

Today’s S&P 500 index is concentrated in just a few names, to be sure. But not like in 1999. A correction of some sort in the top 5 SPX stocks noted above is likely, given their overbought status.  That’s not to suggest that they will crash and burn like in the technology crash of 2000-2001.  Today’s SPX, while dangerously concentrated in a few stocks, is nowhere near as goofy as it was in 1999. But they are overdue at least a minor correction. This will put at least some level of hurt on broad index investors like holders of the SPY-US ETF.

The broad market equal weighted index might be something to consider for investors who prefer broad index plays. RSP-US or the C$ hedged version EQL.F-T is one such ETF. Such a strategy should allow one to participate in the current technology stocks, yet in a far less concentrated manner. Plus, one might achieve a positive bump if money does rotate into value or other sectors in light of a tech stock correction.