Home / Have your cake, and eat it too!

Have your cake, and eat it too!

Regular followers of my blogs, BNN appearances, and articles know where I stand regarding the current risk/reward profile for the markets. Monday’s blog presented a bit of a dilemma for investors who follow technical analysis (https://www.valuetrend.ca/?p=1947). It asked the question: do we pay more attention to the obvious trend in the market, which is up, and continue riding the gravy train, or do we heed the warnings provided by long-term chart indicators?  Longer termed factors include a 13-year ceiling on the S&P 500, the maturing of a 5-year bull/bear cycle, and various other warning signs of a pending corrective movement.

Stocks are not outrageously overpriced from most fundamental perspectives, but they aren’t cheap either. Realistically, much of the 2009-current bull market has been driven by the Federal Reserve’s easy money and QE programs. Risks abound in Europe and other markets that could kibosh the party at any time. Perhaps a little hedging activity within an equity portfolio is prudent as markets near the end of their seasonal period of strength (end of April), even if you are in the bullish camp. Thankfully, there are a few potentially lower volatility ETF offerings out there that might fit the needs of investors, without the hassle of trading options or more aggressive pure VIX or Inverse ETF’s. I’ll cover two of my favorites here, for those who have an interest in them. Please note that you should do your own diligence on these products, as they are certainly not for everyone’s portfolio.

Powershares S&P 500 Downside Hedged ETF (PHDG-Q): This ETF, which I may initiate a position in the equity platforms I manage in the coming weeks, tracks the S&P 500 Dynamic VEQTOR index. The index tilts back and forth between overweighting the S&P 500 stock index vs. the VIX  volatility index in various proportions, depending on specific trend-identification factors. It legs in and out of the VIX according to the amount of volatility on the underlying S&P 500 stock index. While the ETF itself has not been around very long, the underlying index has been around since 2009. Powershares back tested the model prior to that, going back to 2006 (so, from 2006-2009 it was all theoretical). Over all time frames (both real and simulated) the strategy appears to have vastly less volatility than the S&P 500. During the 2008/9 market crash, as well as the significant correction in early 2011, the model had initial drawdowns, followed by upside as it adjusted its VIX weighting. During rising markets over the period noted, the model delivered positive, but below-benchmark returns. This would make sense, given its VIX/hedging posture. Remember, there is a time-lag as the strategy legs in and out of the VIX, which causes some short termed negative returns during market trend transitions. This would not be an ideal ETF to hold during a  a flat meandering market. It may be suitable for those who believe a bear market is possible, where an investor wants some upside from bull market participation while it lasts, with lower downside and potential profits if a bear market is severe and lengthy. A competitor to this ETF is VQT-US. I’ve used the stockcharts zigzag tool and calculated the retracements from the weekly bar chart highs on this ETN (exchange traded note). As you will note on the chart above, although this ETN has only been around since 2011, its volatility is lower than the S&P’s. For example, the March – May 2012 retracement of 7.9% on VQT was a bit less than the 8.8% S&P retracement in the same period. From the longer termed charts I have viewed on the underlying VEQTOR index, the longer the bear market, the more likely this type of ETF (or ETN in VQT’s case) is to experience positive returns.  I cant post the Bloomberg chart of the long termed VEQTOR chart to illustrate this, but readers can email me personally and I could send it to you if interested.

Horizons Auspice Managed Futures ETF (HMF-T): is more of a direct bearish play, yet not as aggressive as in inverse or short ETF. Its managers can long or short a rather diverse range of futures contracts – everything from currencies, interest rates, commodities, stock market futures – the whole ball of wax. The ETF is widely diversified for risk protection through at least 5 broad sectors, and 20 individual contracts. Meandering trends are a net drag on this type of ETF (like the VEQTOR based securities mentioned above). This ETF has performed poorly in the recent bull market. However, from a technical perspective, the ETF seems to be putting in a base right now. I look at this, or any managed futures ETF, as a non-correlated asset class to consider when equity markets are bearish. Thus, I would enter such an ETF upon its base breakout, ideally during a fairly identifiable stock market downtrend. 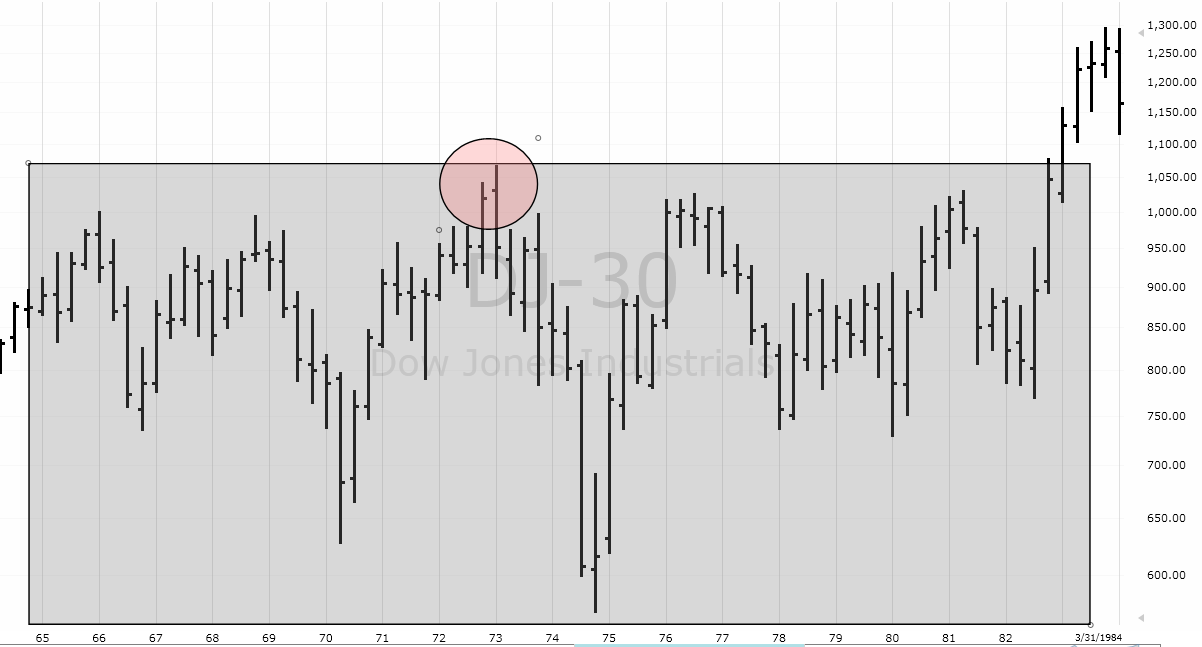 I mentioned on Monday’s blog that markets sometimes will break through the ceiling (resistance levels) within a secular sideways market. Case in point, the 1965 – 1982 sideways market, where the DJIA was contained with a lid around 1000 for 17 years. Note the breakout to new highs about half way through the cycle – in late 1972. This breakout proved to be false. Having already tested and failed at the 1000 level twice before that breakout, the Dow went on to test and fail twice more over the following decade. I am sure that many investors were just as bullish during those heady days of 1972 , as they drove markets to brand new highs during a sharp 3-year bull market. The lesson: ride the bull, and enjoy the profits. But have an exit strategy until the sideways market proves to be over.

I will be speaking at the Clearview Health and Leisure Show, March 23rd @ 2PM. Come out and enjoy the show, and stop by our booth.