Home / Have you seen the VIX?

Have you seen the VIX?

The VIX (often called the “fear index”) has moved from the status of being suppressed for most of last year into it’s more typical volatile status in 2018. Interestingly – in 2017, the market was so low in volatility that the VIX hovered near 9-10 for the better part of that year. This was an historic anomaly. It has never happened before for that type of extended period. See the chart below and take note of that extended low-VIX levels period in 2017.  Despite the unrealistic likelihood of such low volatility continuing, traders and ordinary investors bought inverse VIX ETFs enthusiastically.  Sometimes with three times leverage.  This was a myopic move- investors were foolishly betting that volatility would stay low for an eternity. 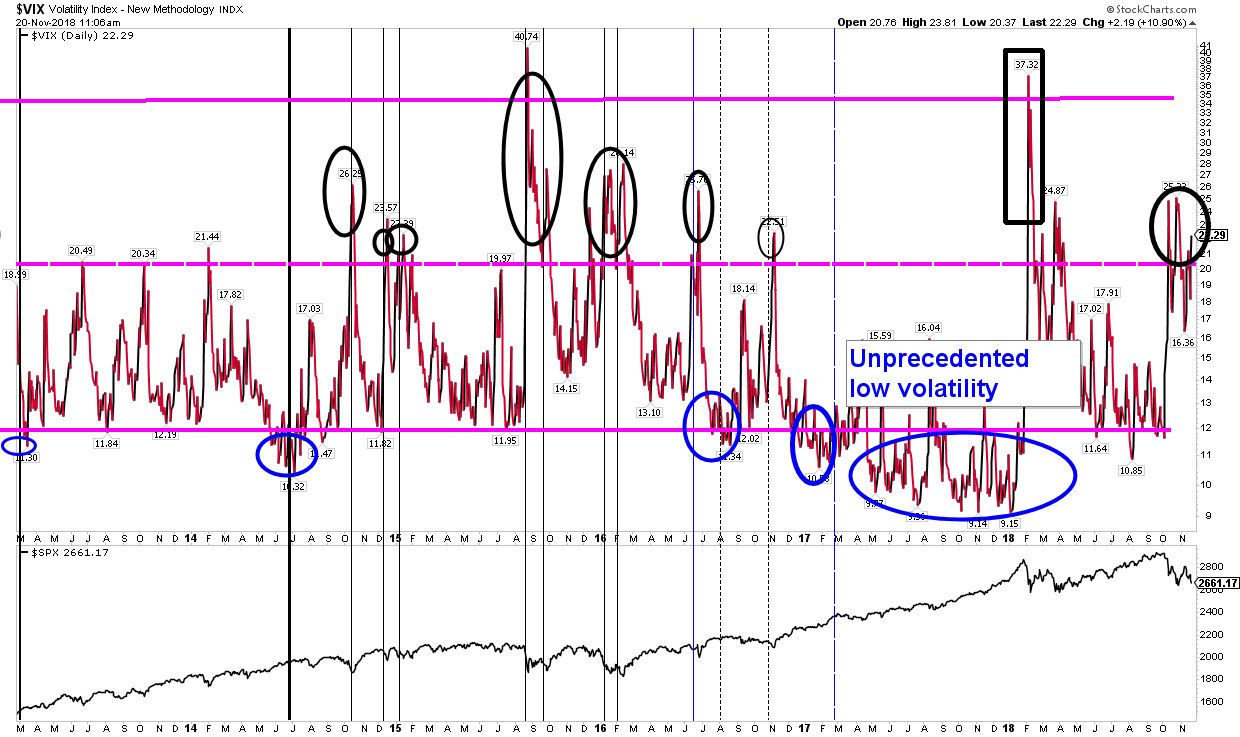 Suddenly, January 2018 came along. Markets fell hard. Then they rallied. Then fell again in February. Volatility had returned. Investors who owned inverse ETFs lost their shirts last winter -particularly the ones who bought a leveraged inverse VIX products.

Amazingly, some of them decided that they should approach the manufacturers of inverse ETFs with death threats. I’m not making this up. Apparently, buying leveraged inverse VIX ETFs are a display of investor brilliance when it works.  If they blow up-  it’s no longer the investors fault. Instead – it’s a cleverly disguised high risk speculation aimed at deceiving investors. You see, society has taught us that whenever we make a mistake – it is not our fault. A drunk who orders too many drinks in the bar can blame the bartender for their DUI ticket. The addict can blame society rather than his own life decisions. Cheating spouses blame their spouses for forcing them to cheat.

What I can tell you is that the VIX, despite market madness of late, is not deeply overdone just yet. This implies that the noise isn’t over just yet. We may have some more volatility to go before markets begin to trend again. A VIX level that goes above 30 is historically an accurate turnaround signal. It’s in the low to mid 20’s right now. Its getting close to that point of maximum fear, given that the VIX is at the lower band of my “overdone” zones. Meanwhile, ValueTrend  continues to hold about 12% cash in our Equity Platform.

Investing in a blameless world

Going forward, if we trade the wrong way – I don’t think you or I should be held responsible for our own actions. It’s society that is to blame. The government owes us our losses back. It’s only fair.