Home / Has the Nasdaq Cracked?

Has the Nasdaq Cracked?

The Nasdaq had broken to new highs in late November. Typically, breakouts to new highs through a resistance level such as the NAS had experienced are bullish. However, late last week the fortunes of this tech and bio-heavy sector reversed. The NAS is just on the verge of breaking back below the lid that had contained it since 2015.

I’d like to look at the NAS chart from a technical perspective, then take a quick look at some of the high-influence sectors that comprise the index. From there, we might receive some guidance as to where the NASDAQ may be headed in the coming months.

The weekly chart of the NAS shows us continued strong money flow – as evidenced by the Chalkin money flow oscillator (top pane) and the cumulative Accumulation/Distribution line (bottom pane). Divergence by the quicker moving stochastics indicator and longer termed momentum oscillators RSI and MACD gave us a heads up that a potential correction was on its way. The NAS is testing its 50 day (10 week) MA and is well above its 200 day (40 week) MA. It was arguable that the NAS was overbought back in September when it was more than 10% ahead of its 200 day MA. This is something I have discussed on this blog and on my BNN appearances in the past. 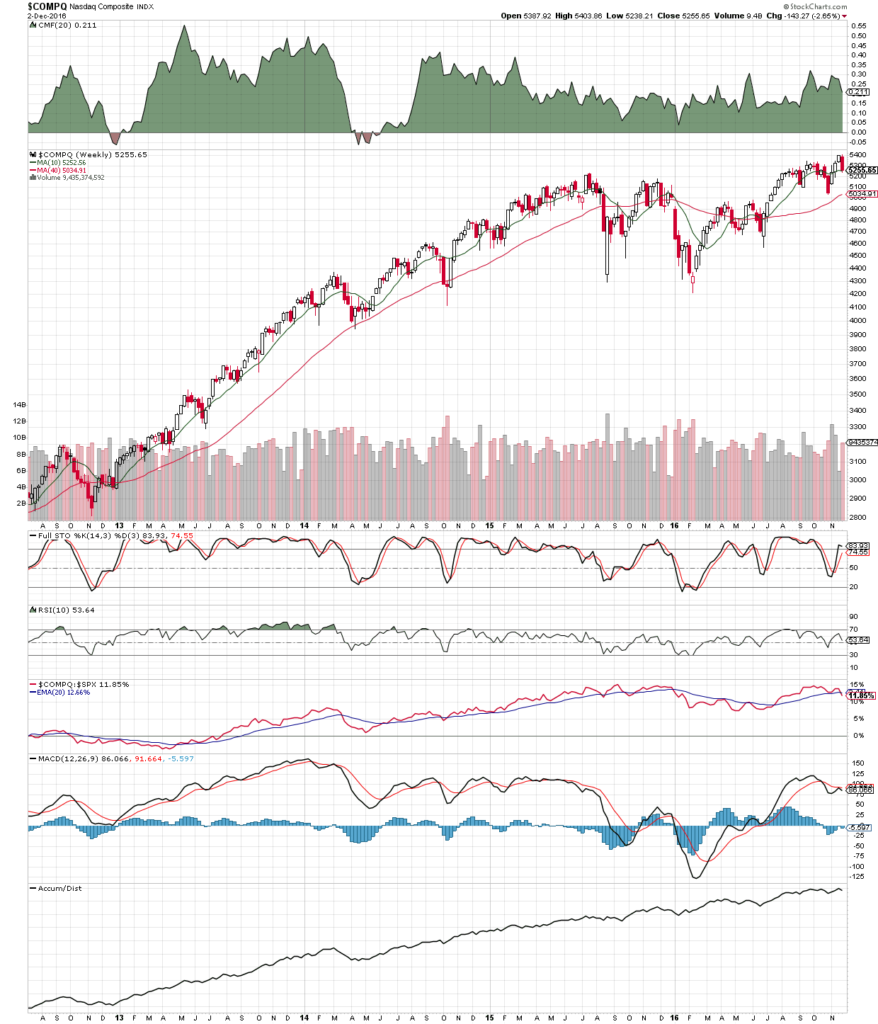 Some of the major culprits of the selloff were in the tech sector. LinkedIn reported a softer outlook than the market wanted to see. From there, Apple, Amazon (which we hold) and Facebook sold off. Note AMZN is approaching the vital 200 day MA. The 200 day MA should be watched on AMZN, as should the last low– which is around $675. Facebook has broken its 200 day MA but is well above its last low of $110. Note that both stocks—in fact MOST stocks you will look at — will occasionally break their 200 day MA. This is why I insist that a prior low AND the 200 day MA are taken out in my sell discipline. Yes, it gets you out later – but it keeps you with the major trend without whipsaws if you follow this rule. See my book Sideways for more details on selling discipline.

You will note that the Biotech ETF (IBB) is moving sideways in a range. It looks like it may head back down to the bottom of the range (250 on the index). That’s about 7% away from current levels.

The broad NASDAQ 100 looks like it may see a bit more downside – given the need to flush the momentum oscillators out from their current downward trajectory. I think that final flush will result more from the biotech sector than the tech heavyweights – given the support levels we are seeing on their charts. That might change if current levels for the tech’s don’t hold. Technology tends to have seasonal strength into the new year and a while after that point.

The CSTA Toronto chapter has asked me to speak tomorrow – Tuesday December 6th at 12:00 noon. I’ll be talking about sector rotation. Everyone is welcome, and a small admission fee includes a lunch. The address is: 161 Bay Street Brookfield place – Front & Bay St – Suite 4300 (Bloomfield room)