Home / Has the loonie bottomed?

Has the loonie bottomed?

The chart below shows a 10-year picture of the CDN$ vs. the USD. As you will note, the loonie recently broke the support level it had established in 2008. This coincides with Canada’s official “recession” status announced a month ago. As I write this blog, I see that the loonie has rallied off of its $0.75-ish low – its currently pushing towards $0.76.

If we look at the near termed (daily) chart we can see that traditional stochastics and RSI momentum indicators are looking rather flat. No sign of gathering momentum here. However, the longer outlook for momentum may be changing, as indicated on the MACD indicator. I’ve circled a diverging trend in MACD – it’s been moving up since August, despite the loonies decline.  Comparative strength vs. the USD is leveling off, but the bigger trend is down (Second pane from bottom on daily chart). 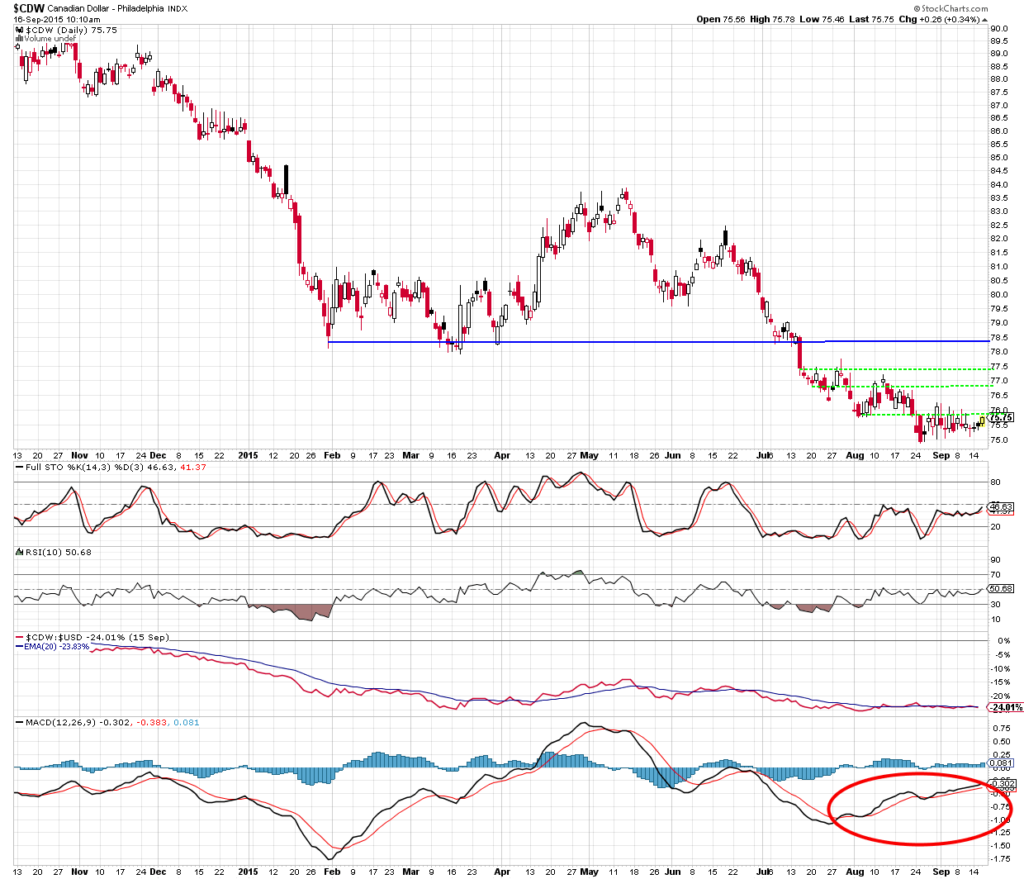 If we look at the USD chart vs. the world basked of currencies (which I have shown before on this blog with my marked levels of resistance)—we can see that my prior marked “Major resistance zone” is in fact holding the USD back from its upward trajectory. A stalling USD certainly places less stress on the plight of the loonie. Going back to the daily chart of the loonie, you can see that it will face minor levels of resistance on its way to $0.785. It may stall at any one of those levels if it chooses to rise (per the MACD signal), or it may make it all the way to $0.785. Conversely, we need to watch 0.75 for ongoing support. A break of that level would imply more pain to come.

I don’t see enough upside on the CDN$ to meaningfully reduce my USD exposure. Yes, we could see $0.785 – that may happen sooner if the Fed chooses not to raise rates on Thursday. Still, a 2.5 cent maximum CDN$ upside makes me less inclined to take profits on my USD holdings given the risk of a failure for the loonie to hold $0.75 – which would likely lead into a significantly lower target price. The risk/reward for the loonie is unfavorable, despite the possibility of a near termed rally.